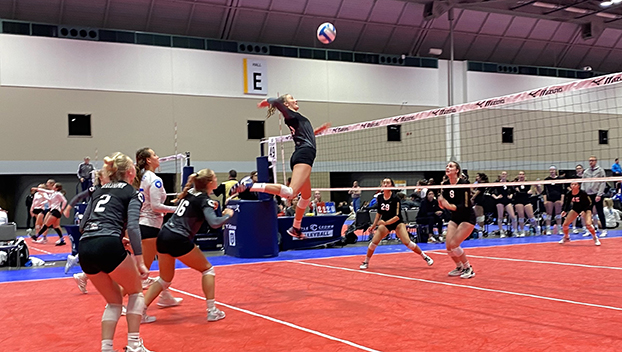 High school junior Brooke Bultema has the size, power and speed to be a special player for Kentucky volleyball coach Craig Skinner.

Problem-solving is one thing that Brooke Bultema says she loves to do. Same with communicating with other people.

Those skills should be valuable when the Ursuline Academy (Cincinnati) junior eventually joins the University of Kentucky volleyball team to play for coach Craig Skinner.

Bultema, a middle blocker, says her biggest on-court strength is her speed.

“I feel like I am pretty fast and that is something that is very helpful in my game,” Bultema said. “That is unique about me. I have the opportunity to play six rotations this season in tournaments. You do not see a lot of middle blockers playing defense in the back row. I have also really improved my passing.”

The 6-3 Bultema had other options when she committed to UK. Michigan State, Ohio State, Illinois, Penn State, and Purdue had either offered or were close to offering when she picked Kentucky.

Kentucky’s national championship didn’t hurt her feelings about UK but she says even without the title she would have still picked the Cats.

“That is an incredible achievement but my choice was about the people,” she said. “I have learned from high school and club season that it is about community and what I thrive in. I saw that at Kentucky and know I can thrive with those people.”

Bultema says former teammates playing in college tell her how much they miss the high school spirit but she liked what she saw at UK.

“I learned that (spirit) is so alive at Kentucky. As soon as you step foot in that state you see UK flags, stickers or shirts. That is the first indicator it is a special place,” she said. “I started to get to know the coaches when I was in like eighth grade. I went to a couple of camps.

“Coach Skinner tells you about his philosophies and what he believes. It just all connected so well with me and fit me and my personality. At the camp, you got to work directly with the coaches who gave us tips and ran us through actual drills they do in practice. I just loved it.”

Even though she lives in Cincinnati, she didn’t “start connecting” to UK until she considered Kentucky for college.

“I actually have a friend who is a Kentucky fan. My mom knows somebody who just bleeds blue and talks Kentucky all the time,” Bultema said.

Bultema started playing club volleyball at age 11 but she also played basketball and tennis. She said “juggling all that” was too much.

“It got to be overwhelming and I just loved volleyball, so I just went with it, and then fell even more in love with it. I have never looked back,” she said. “When I started playing I was pretty awkward. I had not yet fully grown into my body. It took time.

“When I was 12 to 14 when I grew the most. I had to relearn muscle memory. I didn’t have much power on the ball. Fortunately, I gained that with training.”

She says her approach jump is now 10 feet, 3 inches and she is working to make it higher. Her father is 6-8 and her mother is 6-0 and she also has a 6-7 brother who plays basketball at Wheaton College in Illinois.

Bultema was invited to the USA Volleyball National Training Development Program this summer that brings together some of the nation’s top players and coaches.

“It’s a very special opportunity and I appreciate being part of it,” she said. “Any chance you have to improve your game, you want to do it.”