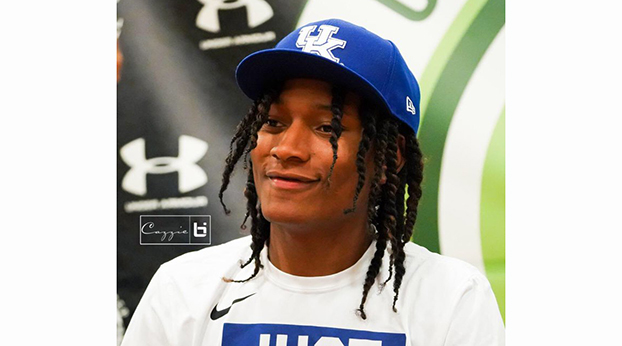 Washington will do whatever it takes to win

“He is a winner. Whatever it takes for him to win, especially in big games, he will do it,” said Kaffey. “He will always show who he is. We were so good team-wise that there was not any need for him to do anything crazy when we were blowing a team out. But the bigger the stage, the better he always is.”

Kaffey said most games Arizona Compass Prep had that Washington would usually be the best player on the court. However, that never influenced Washington’s work ethic.

“TyTy is a worker,” Kaffey said. “We told him if we wanted to be noticed, he had to get his body right. There would be days he would be outside at 5 a.m. pushing the sled. He got with our weight trainer and really improved his body.”

Kaffey said those who doubted Washington’s potential inspired him to show he was better than many believed.

“He’s been through a lot. There were some honors he should have been part of and wasn’t but that did not keep him from playing and working at a high level,” Kaffey said. “His parents did a tremendous job raising him. You are not going to outwork him.

“He had the mindset to show he was not the 115th ranked player in the nation and was not a low major player. For him to showcase what he could do, he needed to win. Part of winning is getting stops. He’s always had great defense in him but this year he was on a mission.”

Kaffey noted there was no “magical” transformation for Washington. Instead, he used the resources Arizona Prep provided to get his body right and hone his skills.

He led Arizona Compass to a 28-2 record and a spot in the Grind Session national championship game where it lost 51-49 to Monteverde Academy.

“The Grind Session was a great platform that helped him become the best player he could be. It’s a very competitive platform and he’s a very competitive kid, so he embraced the process,” Kaffey said. “He had a lot of plays that were just tremendous. He is flat addicted to winning. He found ways to be part of winning for us regularly. That’s why you can just describe him as a winner.”

“I have been doing this 14 years and not what guys are special. TyTy is a born killer,” Kaffey said. “He’s not going to smile. He’s going about his business. No stage is too big for him, either. He was born to be a professional basketball player and Kentucky will help his platform.

“They are used to excellence at point guard and TyTy is no different. I think he will come in and help the team get back to where Kentucky is used to being. He wants to be great and will be great. He’s built for that.”

Former Kentucky star Julius Randle has had an MVP-like season for the New York Knicks who went from 21-45 last... read more