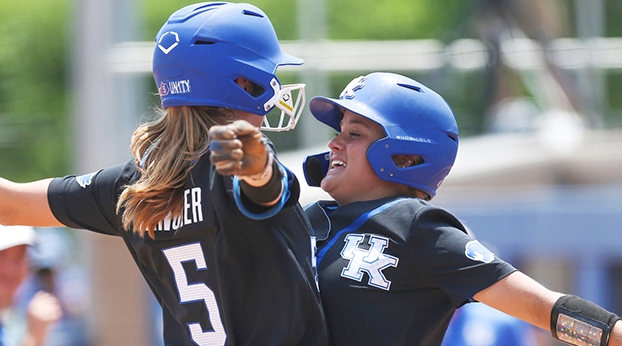 Kentucky is going to the NCAA Super Regionals for the eighth time in school history.

The Wildcats (43-14) swept Notre Dame in the Lexington Regional on Sunday, one day after the Irish defeated Kentucky to send the Wildcats into the elimination bracket. Kentucky forced a decisive Game 2 with a 7-0 shutout in the opener on Sunday and earned a ticket to the Super Regionals with a 4-0 win at John Cropp Stadium.

Notre Dame (33-15) defeated Northwestern and Kentucky in its first two games before getting shut out in the final two games of the three-day event. The Irish managed just six hits off two Kentucky pitchers. Autumn Humes went the distance in the opener, and relieved starter Grace Baalman in the second game, facing the final three batters of the contest.

The Wildcats set the tone early with a four-run outburst in the first game, while using a four-run explosion in the fourth inning of the finale to put the Irish away and earn a ticket to Tuscaloosa.

“I thought today we dominated all phases of the game,” Kentucky coach Rachel Lawson said. “We pitched well, we did a good job offensively, we created some pressure with base running, and overall, we played pretty good defense. So, I was really impressed with how we came out and we dominated from first inning of game one and then we continued through the second game.”

Notre Dame coach Deanna Gumpf said the fast start by the Wildcats in the beginning was a difference in the outcome in both encounters.

Lawson was especially pleased to see her squad rebound from a 12-3 setback to the Irish in five innings. Kentucky staved off elimination with a 7-2 victory over Northwestern Game 5 on Saturday.

“We were just so bad on Saturday — I mean like I had talked about it,” the Kentucky coach said. “We just like didn’t even acknowledge it. It was like those things that you had to throw it out because if you didn’t it would take weeks to analyze how terrible it was.”

Humes, who scattered five hits in two appearances on Saturday, smacked a solo home run in the second game of the doubleheader and said the Wildcats just wanted to forget about the loss to the Irish in Game 3.

“We just tried to forget every single thing that happened in that game yesterday and start fresh — just because that wasn’t us,” she said. “That wasn’t Kentucky softball. That wasn’t me on the mound. I don’t know who that was, but we just really tried to come back to ourselves and the way that we play the game. When we play the game the way we play the game, we’re going to beat the other team.”

Kentucky, which collected 15 hits in the two games, including 12 in the opener, got a solid performance at the plate from outfielder Tatum Spangler.

Spangler had two hits each in the two contests, including a home run in the first of two games.

Kentucky will now face off against Alabama the next weekend and Lawson said the team will know what to expect from the Crimson Tide.

“The nice thing is we just played them, so we’re not going to lose any sleep preparing necessarily for them like we did this weekend,” Lawson said. “This is really tough on the athletes just having to know so many different pitchers and so many different hitters. We’re a lot more familiar with them so that’ll be nice going in. Now, granted we’re still going to have to figure out how to beat them.”