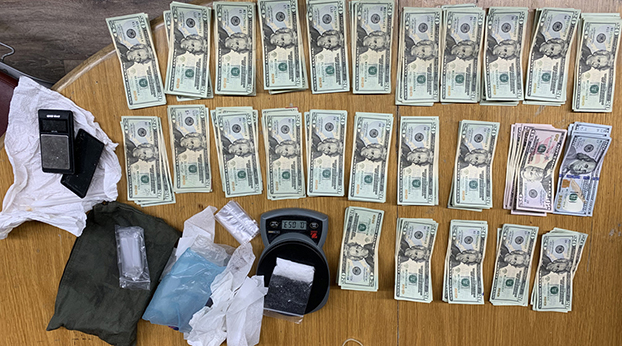 Narcotics and cash seized during a drug investigation are displayed on a table. - Photo courtesy of the Lincoln County Sheriff's Office 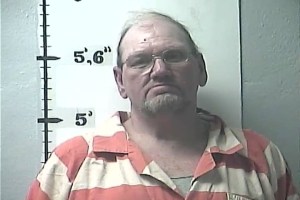 A Harrodsburg man has been arrested on drug-trafficking charges after Lincoln County Sheriff’s Deputies allegedly found him in possession of methamphetamine, and a large sum of cash.

It was about 8:30 p.m. on Nov. 16 when Earnest W. Slaven, 51, of Harrodsburg, was stopped by K9 Deputy Michael Mullins after the deputy allegedly observed Slaven’s vehicle swerve into the oncoming traffic lane on U.S. 150 East.

Slaven told Mullins he had looked down at his phone and had not been drinking. Slaven gave deputies consent to search his vehicle and K9 Luma was deployed.

According to the citation, K9 Luma alerted to the passenger door area on her first pass and had a “behavior change” noted near the rear tire and bumper area.

During the search of the vehicle, deputies allegedly found a used glass smoking pipe inside a towel that was laying on top of a crate of tools in the bed of the vehicle.

As the search continued, deputies found a green nylon bag tied to the frame rail of the truck. The bag contained several empty baggies, dryer sheets, a spoon, digital scales and a baggy containing approximately .5 ounces of a white, crystal substance believed to be methamphetamine.

“Approximately $3,4000 in various denominations along with suspected meth and scales and baggies indicated drug trafficking,” the citation states.

According to deputies the Vin plate on the truck was not the correct one for the 1997 Chevrolet Slaven was driving and the vehicle had a registration plate from a Ford Explorer.

Slaven denied any knowledge, according to the citation, and stated that he was set up for failure.

Slaven was arrested and charged with Trafficking in a controlled substance; possession of drug paraphernalia; careless driving; improper lane usage and several other traffic violations.

He was lodged in the Lincoln County Regional Jail.

Mullins was assisted in the arrest by Deputies Kody Cloud, Brian Cloyd, and Daniel Napier.