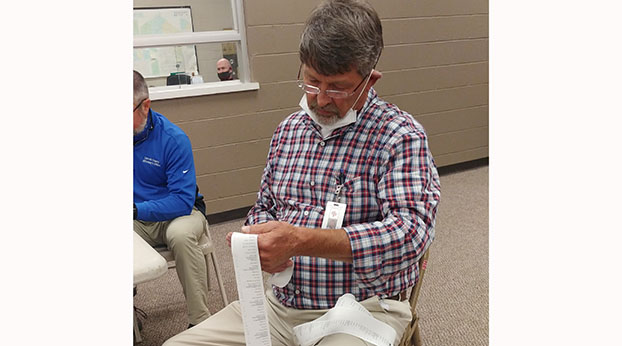 No local reports of irregularities, fraud

With only a few changes to totals among a couple of races, the 2020 Election results for Lincoln County remained largely unchanged as of Monday this week.

All absentee ballots had to be postmarked or turned in by Election Day and received by the county clerk by Nov. 6 in order for them to count.

Lincoln County Clerk Sonny Spoonamore said he doesn’t expect the totals to change by much before the Nov. 10 deadline.

As of Monday, Nov. 9, only a few totals had changed and all of the winners reported last week remained in the lead.

Unlike several other states, which have seen multiple allegations of voter fraud, Spoonamore said there were no issues of fraud or irregularity to report in Lincoln County.
“Things went really well here,” he said.
Voter turn out was high for Lincoln County, he added, with a 58 percent turnout.

Board of Education (District 3)
Bruce Smith – 1,401
William Stafford – 829
There was no change in the totals of this race.

Crab Orchard City Commission
Jerry L. Shelton – 126
Ricky Spoonamore – 104
Kenny Manuel – 103
Bill Dyehouse – 101
Mike Eldridge – 91
Manuel, Dyehouse and Eldridge were the write in candidates who received the most votes. Only two candidates filed paperwork for seats on the city commission this year. There were no changes in these totals since Election Day.

After closing out the regular season Oct. 30 with a 46-24 win over Rockcastle County, the Lincoln County Patriots will... read more