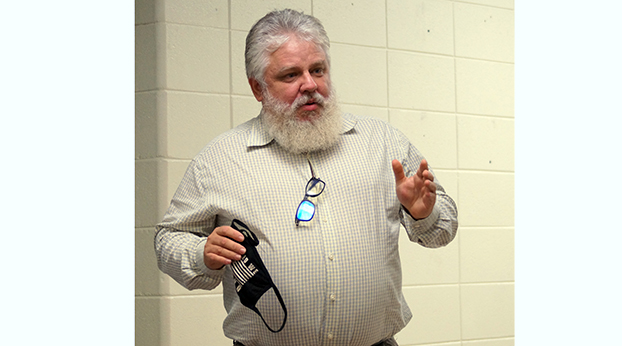 Shane New, director of Community Planning at Bluegrass Area Development District, spoke to the group about the possible grants available to assist in bringing more reliable internet to rural areas.

Local leaders gathered at the Lincoln County Student Support Center last week to discuss ways to bring broadband internet to most, if not all, of the county.

The meeting was called together by local resident and retired school bus driver Gloria Sneed and included representatives from the city, county, and school district as well as others.

Due to the COVID-19 virus, internet capabilities have become a priority in counties across the state.

“We’re here today because I watched T.V. and I saw on the news where Scott County got grants to do WIFI everywhere and I’m sitting there and I’m thinking ‘I wish someone in Lincoln County would do that,'” Sneed said. “Couple days after that, David Gambrel shared the same news post on Facebook and tagged me in it.”

Sneed and Gambrel then got together and began discussing options. As the discussion continued, more local leaders joined the conversation and a meeting was called together to brainstorm options.

“I had four kids at my house yesterday on WIFI and I had Gerald at home wanting the kids to explain to him how this is working and it’s not working. Buffering, that thing goes around and around. This is where we’re at,” Sneed said.

Shane New, director of Community Planning at Bluegrass Area Development District, spoke to the group about the possible grants available to assist in bringing more reliable internet to rural areas.

“We did a grant with Scott County with Scott, Woodford and Bourbon County. It’s a grant that I’m tickled to death that we got, but it really wasn’t as much as what it sounds like,” New said. “We got a grant that totals to about $10,000, maybe close to $12,000 and it was through the Governor’s Office of Ag Policy…that required not only that we get a percentage of money from them, but we also get a percentage of money from your local Ag Policy in each county. I’ll be honest, I wouldn’t advise that be the route we go to get a grant.”

The grant, New said, was essentially to pay for a feasibility study.

“So, in Scott County what happened is they went through that process…what that company provided to them was a feasibility study, but also crowdsourcing…a review to see what the entire county has,” he said.

New said the company sent a link to citizens in the county to study the speed of the internet in certain areas.

All of that information and data is then compiled and given back to the county, he said.

The feasibility study identifies the locations in the county that would qualify for federal loans and grants, New said.

“It shows information about where fiber is currently at in the county. It gives an idea about the general services in those areas and where they might be able to focus their attention at,” he said.

“We’re currently still doing it in Woodford County and in Bourbon County, we’re getting back the results from those two right now,” New said.

Overall, the study provides a map of the county’s current internet capabilities.

“They give you an idea of what the cost of doing it would be,” he said. “In Scott County, the answer was $14 million to get it out to every single customer. Now, I’ve had other companies quote me other counties that are more similar to Lincoln County that have said $4 million would do it for a wireless type of package.”

Getting broadband to everyone comes down to money, New said.

“One of the things that we didn’t want to see happen at Bluegrass ADD and still to this day don’t want to see happen is that we put companies out that have been working on this in these rural areas and putting forth capital on their own,” he said. “The last thing I want to see happen is I go out and get this big great grant for the county and bring in a company, I won’t mention any names…they come in and take taxpayer money to put out those people that have been working in those communities for 15 to 20 years trying to get broadband down there and would have it down there if it made financial sense.”

New said the need for reliable internet in rural communities is something the state as a whole is trying to fulfill.

“Especially with COVID, there’s a lot of pressure to get this done,” he said.

“We need to know where all this fiber optic cable is but also the accessibility to it,” Gambrel said.

Gambrel asked if there were any grants available through the Appalachian Regional Commission (ARC).

“There may be some ways to get some money from ARC, especially if the school is involved,” New said.

New said there were 40 miles of fiber in Lincoln County running to the schools but it is considered “dark fiber.”

“We’ve been in existence for I think 14 years now,” Hosner said. “Most of our coverage is in Lincoln County. We’re trying to get up to snuff on speeds.”

Hosner detailed some of the local projects he’s focusing on right now.

“There’s a spot on Edwards Road, I think it’s Turkeytown Road area, there’s a bunch of homes in that area…we’re going to see about putting a tower up over there,” Hosner said.

Mocassin Road is another area where Hosner plans to cut some trees down and install a tower.

Hosner said school board members could help identify areas in the county that need more coverage.

“We just have to find areas to expand to,” he said. “I’ve got like 800 feet of tower sitting in a warehouse ready to go somewhere…”

Crab Orchard Mayor Billy Shelton suggested the cities pitch in some of the COVID-19 funding they received from the state.

“There is COVID money that’s left and I’m sure we could probably contribute. Maybe Stanford, Crab Orchard, and Hustonville…we all know what’s happened here. It’s COVID that’s brought everybody together. This has really hurt everybody,” Shelton said.

Communications Director Brad Smith said one issue the school district has run into is not so much the availability of internet services, but poor quality.

“Like Gloria said at the beginning of this whole conversation; she has internet, but it’s not efficient for what needs to be done for virtual learning,” Smith said. “I think the problem is a lot more complicated than just availability.”

New said that also complicates the possibility of getting federal grants.

“If we could do this, I really do think it would be worth the money to get it done…because that’s the only way you’re going to get a really clear picture,” he said. “The problem is exactly what you said…we’re not in bad enough shape to get the federal money, but we’re not in good enough shape not to need it. So we’re stuck there in the middle.”

New said Bluegrass ADD is dedicated and willing to work with the county.

“I think we first find out what exactly the situation is on the ground, then we can go out there and say ‘we need to solve this area,'” he said. “If we can find federal money to help with that, that’s great.”

“This is a really complicated thing. Your fiber is owned by a company and those fiber companies don’t play well,” Adams said. “So they charge phenomenal prices for Steve to tap onto the highway that they have built. It was a major loss of money on Kentucky Wired because all of the utilities have poles, and you have to rearrange each one of those wires to suit their order on each one of those poles that the fiber runs on. So there’s $640 million expended on Kentucky Wired without anything being done outside of negotiations with utility companies.”

Adams said it’s going to be a long process.

“We’re more than happy to help with that effort, keep it going and keep the ball rolling with your all’s help,” he said. “Our purpose will be to try and hunt down the grants.”

Lincoln County Daryl Day asked if there is a short-term way to create a map of where fiber-optic lines and dead spots are in the county.

New said the group could work with local providers and compile some data.

“We would be willing to work with any provider in Lincoln County to do that,” he said.