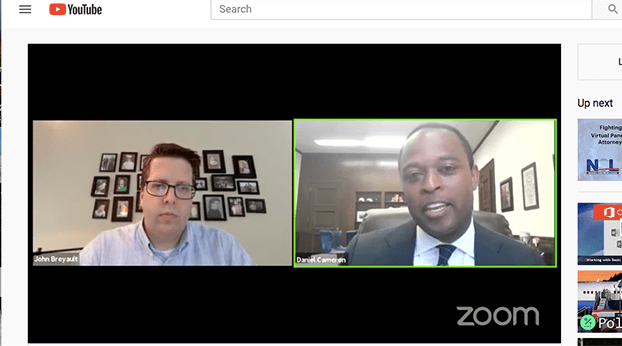 Experts warn that no one is immune; fast-money scams out to trick those in need of jobs, among many others

Although many things have changed with how we live due to COVID-19, Kentucky Attorney General Daniel Cameron said the public needs to know  — scammers are still out there. In fact, recent statistics show they have become extremely skilled, honing in on the public’s insecurities during a global health pandemic at alarming rates.

Cameron gave an overview during a recent meeting, describing just what his office is combatting, which includes a monumental increase in scams specifically related to the coronavirus. The meeting was hosted by the National Consumers League (NCL), out of Washington, D.C., and involved two other experts from the regional Better Business Bureau (BBB) and Kentucky Cooperative Extension.

“We have seen an uptick in scams related to the pandemic — a 300% increase, specifically related to COVID-19,” just in the month of July, Cameron said. And along those lines, he said the AG’s office has received more than 4,000 reports of price-gouging.

He said a special hotline with the office has been set up just to handle the influx of complaint calls coming in about these issues. “It’s been alarming,” Cameron said.

The office has also established a coronavirus task force, in conjunction with the United States Attorneys from the western and eastern districts. Cameron said this has allowed them to join resources, “and increase our presence in our communication and intelligence we receive …”

Because of these federal partnerships, Cameron said they are able to get information out to consumers as warnings.

“What we’re seeing is dramatic spikes in complaints of scammers using the pandemic as an excuse to defraud consumers,” he said

Cameron described one “pretty elaborate” scheme that’s out, involving third-party sellers who actually send a package to a residence. “Then, they go online with that person’s information, posing as them and write a favorable review of the product and use that to scam others into buying it.”

His concerns over this particular scam are two-fold. “We have a third-party seller using the online marketplace in a way that’s not intended, which presents a challenge. That person who it’s delivered to, (the scammers) now have their address and some personal information they need to access their online account.”

The particular scam they are following of this type — referred to as a “brushing scam” — are unsolicited packages containing personal protective equipment. Cameron said if anyone gets a package like this they didn’t order, immediately check into your online accounts’ security, as well as change passwords and IDs.

“If there’s any identifying factors on it, saying where it comes from, immediately contact their customer support to let them know you didn’t buy it. They can shut down those sellers who illegally accessed that information.”

Other information shared showed that as of May, there were 132,000 people in Kentucky who have lost their jobs since the pandemic began. Many are accessing the Office of Unemployment Insurance’s portals, and many for the first time.

John Breyault, NCL’s vice president of public policy, telecommunications and fraud, pointed out that “many of these state commissions are being overwhelmed with the number of people filing complaints — also presenting opportunities for scammers.”

Cameron discussed the data breach suffered by the unemployment insurance program not too long ago. “We had about 220,000 Kentuckians file for benefits — it’s a great concern to this office, if you look at the number — that might have had their personal information taken through this, it’s troubling.”

Cameron said he encourages anyone who’s filed an unemployment claim from March 1 to April 30 to get their one free credit report they are allowed each year. “See if anything has occurred you’re unaware of. That’s a good sign someone has gotten your information inappropriately …”

He also wants people to be aware that any disbursements related to the CARES Act or unemployment, “by and large there’s not any personal information you’ll have to give out open online to receive those funds … be very leery of anyone who comes posing as a friend or an entity who is trying to get your info via a website or by email communications.”

Cameron said technology “plays an ever-increasing role in our community,” because so many are staying home, relying on online marketplaces and services.

Breyault said many tech firms are partnering with state and federal agencies, including the AG’s office, and shared some “stats coming out of Google — they’re blocking 240 million COVID-related spam messages a day.” He said Microsoft is working through digital scam units to feed intelligence to state AG offices and other agencies, as well.

Cameron said that due to critical information provided by Amazon, “it allowed us to send what’s called CIDs, Civil Investigation Demand Letters, to third-party sellers that — get this — were to the tune of almost 1,000% overcharging and price-gouging connected to some online items.” The CIDs are sent to the companies, asking for more information “as a deterrent to that activity.”

He said they’ve been grateful for these relationships they’ve made with online platforms. “They’re able to be our ears and eyes, if they see any activities that might be worrisome,” and that he encourages these companies to “continue to be vigilant on behalf of the people who traffic their sites.” Cameron said they hold a lot of responsibility to do everything they can to increase the trust consumers have abilities to confidently and confidentially purchase goods.

Cameron said if he could get any message out to consumers, it’s “be skeptical.”

Heather Clary always strongly seconds that notion. She’s been with the BBB serving central and eastern Kentucky for 21 years.

“The first thing everyone has to recognize is that there are no easy quick fixes,” Clary said. “Fast money doesn’t fall out of the sky into your lap no matter what the fella is telling you on the other end of the line.”

Check back soon for more information from Clary, as well as Dr. Nichole Huff with Kentucky Cooperative Extension, and LaDonna Koebel, executive director of the Office of Senior Protection and Mediation.

The Kentucky Attorney General’s Office urges citizens to report scams to its Consumer Protection Hotline at (888) 432-9257, or online at ag.ky.gov/scams.