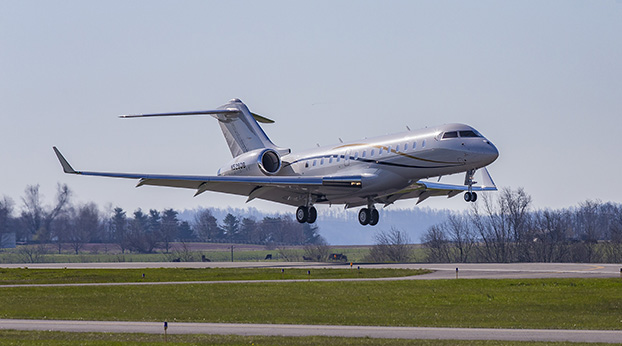 The Danville Boyle County Airport at Stuart Powell Field is using a $3 million state grant to improve its ability to accommodate large corporate jets. The improvements could also lead to more aviation-related opportunities in Boyle and Lincoln counties.

Airport Board Chair Rob Caldwell said Lincoln County officials are being included in developing the airport because “over half of the airfield is actually in Lincoln County.”

Caldwell said government officials, as well as the airport board “feel like this will become a regional airport and not just a local community airport. So Lincoln County is excited to be a part of the airport, and we’re excited that they want to participate with us and with its ongoing development.”

The upcoming project will help the airport take one more step toward fulfilling the airport’s vision of its namesake, the late Stuart Powell. However, “In mine and the board’s efforts to fill Stuart Powell’s shoes, we concluded rapidly that it was going to take more people on the board,” said Airport Board Chair Rob Caldwell. “We picked up four tremendous board members,” who are Glenn Ball, Jake Bell, Shay Pendygraft, and Lincoln County resident Doug Gooch.

Lincoln County Judge-executive Jim Adams said as far as he knew, Gooch is the only Lincoln County resident to ever serve on the airport board. “We’re lucky to have him on the board,” he said.

Even though he hasn’t personally worked closely with the airport, Adams said, “I’m all for it.”

He also suggested that having some type of aviation class at the high school could introduce aviation job opportunities to local students as they choose a career path.

According to Lincoln County High School Principal Michael Godbey, the school was planning on offering an aviation program this year. However, because of the COVID-19 pandemic and budget cuts, it had to be cut for now.

Caldwell said, “To continue developing Stuart’s vision, that being our desire to have an aviation maintenance school on the airfield to generate talent and workforce development,” the airport board wants to work to encourage aviation businesses to locate nearby, whether in Boyle or Lincoln County.

“Currently three corporate jets are based at the airport, but there’s lots of business activity taking place. Jets are landing and parking for the day and they (the travelers) are conducting business in this area,” said Airport Board Chair Rob Caldwell.

“Our ramp was originally designed for lighter aircraft, and on hot days, we’re running into issues with the jets sinking into the asphalt.”

“The state has been very kind and recognized that what we need to do is repave a runway and part of a ramp with asphalt, but the central portion of the ramp will be replaced with concrete so it can withstand the weight.”

Caldwell added, “The state recognized and provided the funds because of the activities already taking place at the airfield.”

Specifically, the project includes repaving a runway, taxi-way and some airplane parking surfaces. It will also include constructing an additional connector ramp and overlaying a large portion of the apron with concrete.

Caldwell said the board had worked on developing the airport’s improvement project for several months. The Allen Company provided the airport “with such good pricing” that the project came in $100,000 under the $3 million original grant budget, Caldwell said.

Therefore the state had an extra $100,000 it could budget for another project elsewhere, he said.

“We are referred to as an uncontrolled airfield. We don’t have a control tower, but we do have instrument approaches for our airfield and a 5,000-foot runway, which makes it useful for any aircraft – up to an airlines size aircraft – to get into the airport,” for business purposes, or maybe someday for maintenance, he added.

“One of Danville’s unique opportunities is that we are a rural community, but associated with urban areas like Lexington and Louisville and Cincinnati. Kentucky is still No. 2 in the country behind Washington State with Boeing, in aviation jobs. We truly believe Kentucky has a need for aviation technicians and we would like to be a part of that. And we want to encourage aviation businesses to develop around the current airfield,” Caldwell said.