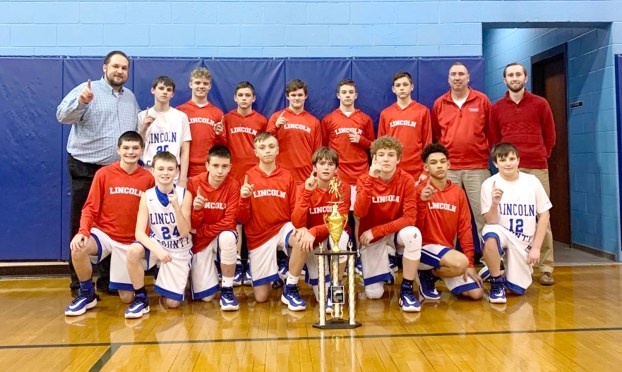 The Lincoln County Middle School boys’ basketball teams claimed a 1-2 finish in the Salt River Conference Postseason Tournament finals, with the eighth-grade Eagles emerging as champions in their division and the sixth-grade team finishing as runner-up in its division in the tourney played at Anderson County Middle School.

The eighth-grade Eagles (29-5) led after every quarterstop, using a 20-11 second-quarter scoring surge to distance themselves from the Bulldogs in the championship game. Lincoln led 14-10 after the first and used the second-quarter run to post a 34-21 halftime advantage.

Bate would outscore Lincoln 16-12 in the third quarter but the Eagles maintained a 46-37 lead. Lincoln came back to outpoint its opponent 13-9 in the final period to secure the double-digit win.

It proved to be a back-and-forth battle between Lincoln and West Jessamine in the sixth-grade title tilt before West claimed the win.

The sixth-grade Eagles trailed at the end of the first and second quarters. West led 13-8 after the first but Lincoln edged West 8-6 in the second period to get within 19-16 at the break.

A basketball road trip to Southwestern Tuesday night proved successful for one Lincoln County team but not so for the... read more