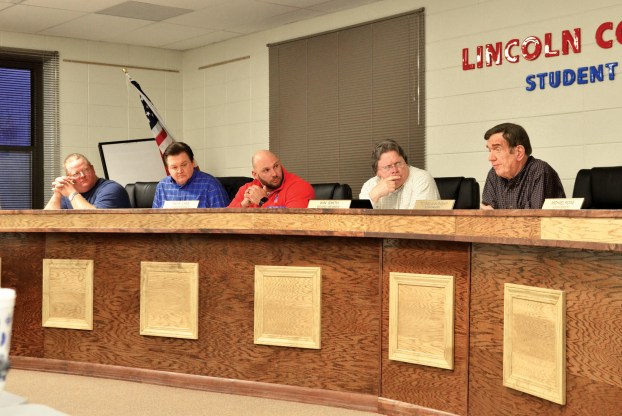 Photo by Nancy Leedy AT A SPECIAL-CALLED meeting, members of the Lincoln County School Board, from left, Alan Hubble, Bruce Smith, Ricky Lane and Win Smith listen as board chairman Tom Blankenship explains the options the board has involving the recallable nickel tax after a petition successfully called for the tax to be put to a vote or rescinded.

STANFORD — The recallable nickel tax approved by the Lincoln County School Board will be placed on the ballot in the next regular election.

The board voted 3-2 Tuesday in a special-called meeting to put the vote before the public.

The board approved the General Fund Levy of 5.7 cents per $100 value of real property by a vote of 4-1 at its September meeting and a group of local citizens – Marvin R. Wilson, David T. Noland, Jenn Broadbent, Daniel Noland and Troy Payton, all of Hustonville – filed an official affidavit of petition to have the vote placed on a ballot.

The group surpassed the required 956 signatures required to get the tax on the ballot by over 400 signatures. The board then had the option of rescinding the tax, placing it on the ballot in the next election or holding a special election.

After a discussion by the board on the three options, board member Alan Hubble made the motion to place the tax on the ballot at the next regular election. Board member Win Smith seconded the motion and it passed 3-2. Hubble, Win Smith and Bruce Smith all voted to put the vote to the public. Board chair Tom Blankenship and Ricky Lane were the two no votes.

Every member of the board weighed in on the subject, beginning with Blankenship.

“The people that were behind the petition was quite successful. They worked hard at it. They gave their due diligence and they were successful in a convincing way,” he said. “A few weeks before that, some board members took a vote and they showed a worthy motivation to support the tax because they knew full well that they could do some great things with the tax for our students.”

With that, Blankenship immediately voiced his opposition to a special election due to the cost.

“We talked about the possibility of having a special election to vote on the tax but it came to our attention that the board has to pick up the tab for that, and that could be anywhere between $10,000 and $15,000. Is that right? Blankenship said turning to Superintendent Michael Rowe.

After Rowe affirmed the estimated cost Blankenship continued, “I just can’t see us, on something that is so questionable or uncertain, to spend that kind of money. That seemed like a reckless expenditure and I would insist that maybe we could put it on a regular election like a May primary or general election in November.”

“I’m just thinking right now that, at this moment, the best thing we can do is rescind the vote that we passed back in September.”

Win Smith concurred with Blankenship on the special election option.

However, Smith differed from Blankenship on his preferred option.

“I’m not sure, though, that I wouldn’t like to go ahead and have it put on the May ballot,” he said. “The move has been made to put it in the hands of the people that live in the district and voters to decide. So let’s decide and go from there.”

Board member Ricky Lane had the most to say about the issue of rescinding the tax or going to a special election or regular election, admitting that he was torn on the issue.

“I just think that the potential that we have as a district to grow with this nickel is really big, especially with the things that we can do. The improvements we can make. The safety in the schools. The opportunities we can give the kids. It’s a definite need and it needs to be addressed, revisited or something,” he said. “So I’m kind of torn between …”

Lane went on to explain that his primary concern is the possible misconception of the tax.

To clarify, the nickel tax equates to $57 per year on $100,000 of property. These recallable funds are classified as restricted funds and can only be spent for major renovations of school facilities, security improvements, new construction, debt service and/or land acquisition (pursuant to KRS 157.420 (4)(b).

Lane also related that he thought having to possibly send out another tax bill would be “a little bit tough on the people in the community.”

“A part of me says rescind and work on a more strategic timeline as far as when is the best possible time to rescind, have another vote and see if we can get it passed so we don’t have to send out two sets of bills,” Lane concluded.

The newest member of the board, Bruce Smith, followed Lane in addressing the board and the attendees of the meeting.

“Has there been a plan for how the money is going to be spent?” he asked the board. “Because I think, if you might recall, the last time this was tried there wasn’t a plan of how the money was going to be spent. I think if people know we’re going to build a school or remodel schools or whatever, update, then they may be more apt to vote for that tax.”

Alan Hubble, who cast the lone no vote on approving the nickel tax back in September, was the final board member to speak.

“I guess my point of view is, if you rescind, you’re taking a step back,” he began. “I’m still not for the tax. I’m kind of one-sided on the measure to start with. If you actually rescind it, then what … if you’re just going to put it off until a later date and then try it again then you’re just pushing the buck down the road. If you want to do it, do it. Put it on the May ballot. It’s just my opinion.”

Hubble says delaying a decision on the tax does little to help the board in the public’s eye.

Hubble agreed with Blankenship and Win Smith on the special election option.

“I’m like Tom and Win that there’s no reason to have a special election whatsoever because we don’t want to be spending money out of the general fund that doesn’t have to be done at this point and time.”

As Blankenship asked for any additional comments on the issue before asking for a motion, Lane spoke up once again.

“I just think that, if we’re going to do this in May, we’ve got to share the plan and have some kind of campaign of some sort to inform our community about what’s really going on and not letting five or six people say what’s going on and dictate the narrative in the community,” he said. “We want to make sure that … If the people are going to vote and it’s going to be a political vote, it’s not going to matter whether we’re doing anything or not. It’s going to be a vote for taxes or against taxes. But for everybody else, whomever that might be, at least we can tell them exactly what the money is going to be used for and the need in the community and the need in the school district for it. They can make a decision based on that and not somebody else’s rumor. If we’re going to do it, we need to get some kind of plan together.”

After each of the board members voiced their opinion on the nickel tax options and before a motion and vote were taken, Bruce Smith raised a question.

“The other thing that’s been brought to my attention is the open records request, Is that something we, as a board, had authorized to do or who did it,” he asked.

“I did not do it, that’s all I can tell you,” Blankenship answered.

“I know some people have expressed concerns to me because it has identifying information on it,” said Bruce Smith.

Board attorney Jonathan Baker clarified that the petition can be viewed by the public.

“The petition is a public record,” Baker said. “Anybody in America can ask for that information.”

“I was the one that made the open records request,” he said. “As superintendent of the school district, it’s my job to help the board to make sure that the process was completed. I looked at it and it looks like Sonny (County Clerk George O. Spoonamore IV) did a good job with it. He invited myself and another employee of the district to come in and watch the process. But I wanted to make sure that the signatures were verified. He stopped at 1,002 or 1,005. It looked to me that there were probably 1,300 or 1,400 signatures there.”

“It seems like the petition committee did a good job. They probably got 400-500 more signatures than they had to. To be honest, they probably could have got more.”

As far as the identifying information on the petition, Rowe said not all information is shared.

“I think the fear out there is about personal identifying information. Social Security Numbers can’t be shared,” he said. “We’re not doing anything with it. It’s public record and anybody else can ask for a copy of it.”

No public comments were taken during the special-called meeting, however, as the meeting was adjourned and the board left the table, a woman stood up to voice her opposition to the nickel tax, saying “I’m against this tax,” and “This is completely unfair.”

She agreed that the schools need help but that she wanted a fair tax and not just one that affected property owners and business owners. She stated that only 47 percent of the population are property owners and that her property taxes have gone from 30 cents per $100 to 68 cents in 10 years.

“I’m in 100 percent agreement,” Rowe responded. “I would love to have a different avenue to be able to talk about taxes for getting updated and new facilities but, at this time, there is no other avenue.”

After the woman implied that other options were there, Rowe said there were none.

“There is no other way for a school board to get money except through the process of taxing land,” he said. “My understanding from the legal counsel (Kentucky Association of School Superintendents) there is there’d have to be a change in the constitution, because the constitution says that landowners will bear the cost of education in Kentucky. I would love to see a change but those are some of the hurdles that would have to take place for that to happen.”

While the lady continued with her dislike for the tax, calling it “deceptive,” Rowe said the tax is to help the school system due to the millions of dollars it could provide the district.

“The thing about the recallable tax is the possible match from the state,” he said. “It helps the school system. It helps the community. It helps our kids.”

Also on the agenda for the special-called meeting was the subpoenaed witness who made accusations in a facebook post of Rowe allegedly accepting lobbying gifts. However, the item was struck due to the fact that the subpoena had not yet been served.

‘Tis the season: Lincoln County kicks off the holiday season with annual tree lighting and parade

With the Thanksgiving holiday behind us, it’s time to welcome in the Christmas holiday season. Come ring in the holiday... read more