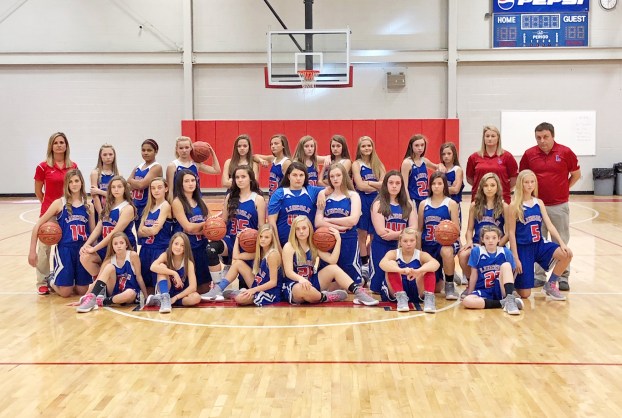 Anderson County Middle School, which had swept Lincoln at the end of the regular season, could not repeat in the rematch played last Thursday at LCMS as the Lady Eagles defended their home court.

The seventh-grade Lady Eagles, led by coach Chansler Gilbert, were the first to celebrate a championship victory, edging Anderson County 40-36 in their title tilt.

The score was deadlocked at 7-all at the end of the first then Anderson outscored Lincoln 9-6 in the second quarter to take a 16-13 advantage at the half.

The Lady Eagles would use double-digit scoring in both the third and fourth quarters to earn the win, though. Lincoln outscored Anderson 14-9 in the third quarter to put the game back in a tie, 27-27, then finished with a 13-9 fourth-quarter edge to secure the win.

Action was just as tight in the eighth-grade final.

Lincoln amped up its offense in the third quarter, breaking on a 15-5 scoring run to open up a 30-20 lead over the visitors. Anderson answered with its own scoring run in the final frame, however, the 11-6 surge would not be enough to overtake Lincoln.

For Anderson, B. Briscoe had the team high of 12 points. M. Hahn scored seven points, C. Cooper had five points, A. Peyton had three points and L. Johnson and J. Satterly each had two.

The eighth-grade Lady Eagles, who are coached by Rebecca Shearer, finished the season 17-1, 9-1 in league play. The only loss coming to Anderson.

The seventh-grade Lady Eagles earned their spot in the SRC Tournament final with a 37-19 semifinal win over Boyle County Middle School.

Lincoln exploded out to an 18-2 halftime lead and Boyle never threatened.

Hallie Mullins led Lincoln in the win with 13 points. Alexia Baldock had eight points, Milah Mullins and Taylen Ralsten each had six points and Germani Crosby and Gaitlin Lewis each had two.

Lemonds led Boyle with five points. Christopher and P.A. Metz each had four points, Bugg had three points, Leffew, two, and Britt, one.