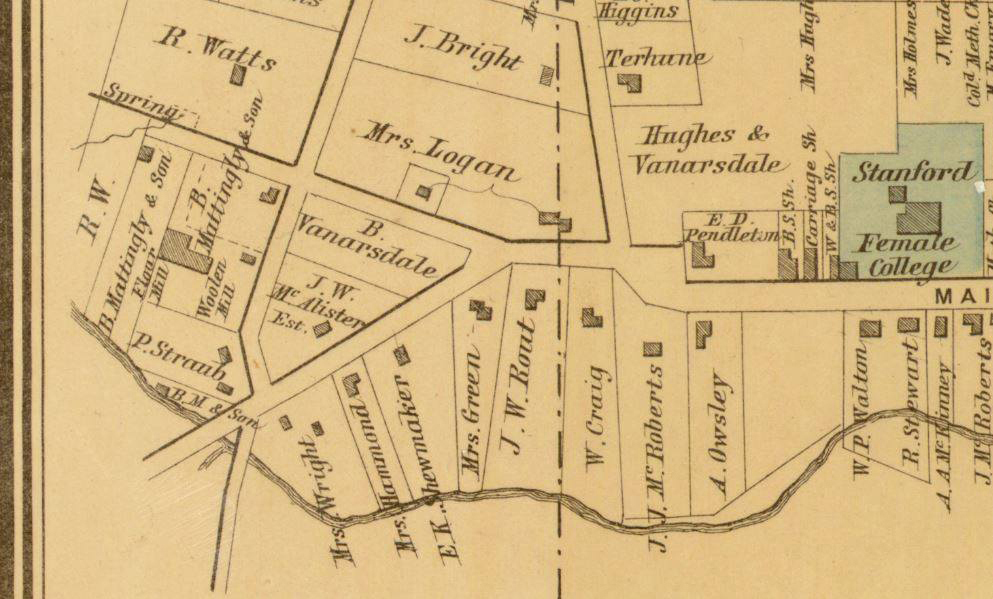 STANFORD — New details have emerged about the historical cabin that was found during a city demolition earlier this month.

Lincoln County Property Valuation Administrator David Gambrel has continued his research, looking at historical records, property deeds and census data, to determine more information about the previous owners of the Hustonville Street lot, and possibly when the structure was built.

Previously, archaeologists with the University of Kentucky Archaeological Survey estimated the cabin was constructed in the mid-1800s. This week, Gambrel said his documentation and research indicates the same.

“I can say with absolute certainty that this was originally (Benjamin) Logan’s property,” Gambrel said. “I actually looked at that (1841) deed and plotted the survey calls in it, and when I did that my chin dropped, because it is the seven-and-a-half acres, basically starting where Spurlin Funeral Home is, going all the way down to Mrs. (Eliza) Stewart’s house (the cabin).”

“Twelve years later, he sells off the least desirable portion of the land because the further you go down Hustonville street, the lower it gets, the closer it gets to the creek,” he said. “I don’t know anything about the age of homes, but I do know about real estate and 12 years later he sells one-fifth of the least desirable portion of it for the same money he paid for the whole thing.”

From an appraisal standpoint, Gambrel said the only logical explanation is that Hughes did something to improve the property in those 12 years.

“Which matches up exactly with what the guys from UK (University of Kentucky Archaeological Survey) said, that it would have been built between 1841 and 1853,” he said.

“I haven’t had time to see what he did with the other six acres, if he sold that first or what, but it sure didn’t make sense that the first house he’s going to build is down there next to the creek and not up where Spurlin Funeral Home is,” Gambrel said. “I’ll leave the age of the house, but the deed research and the sales history indicates it was built between 1841 and 1853.”

Gambrel said he also researched lot prices for that time period and found a house and lot on Main Street, near where the Stanford Christian Church is located today, that was purchased in 1851 for $500.

“In that regard, things probably haven’t changed…which is going to be the choicer of real estate, right on Main Street, right in the thick of things, or down next to the creek?” he said.

Gambrel said by 1879, each lot on the map, from the original 7.5 acre property, has a structure.

In an email, Brother said the logs are “V-notched” which is typical of mid-to-late 19th century log construction in Kentucky.

“It has narrow jambs, but the logs are still fairly sizable – at the earliest I would say post-1830s, but I lean toward 1850 given the transfer of the land at that time,” she wrote. “There is a winder stair beside the stack, but I did not attempt to venture up the steps, given the condition of the building…visible milled lumber still extant is circular sawn.”

Gambrel said the only other way to know for sure when the cabin was constructed is through what is called Dendrochronology or “tree-ring dating.”

The Logan-Whitley Daughters of the American Revolution (DAR) Chapter is hoping to raise enough money to cover that cost, according to Treasurer Lynda Closson.

If enough donations are received, Closson said a sample of the wood can be sent to a dendrochronologist for testing.
“Hopefully, we can tell the death dates of the logs, and perhaps provide a good construction date,” she said.

Anyone interested in making a donation can drop off checks or cash at First Southern National Bank in Stanford, or contact Closson.

SO YOU KNOW
Donations will be accepted in the form of cash and checks and can be dropped off at First Southern National Bank in Stanford. Checks should be made payable to the Logan-Whitley Chapter, DAR. For more information contact Lynda Closson at (606) 365-1776.