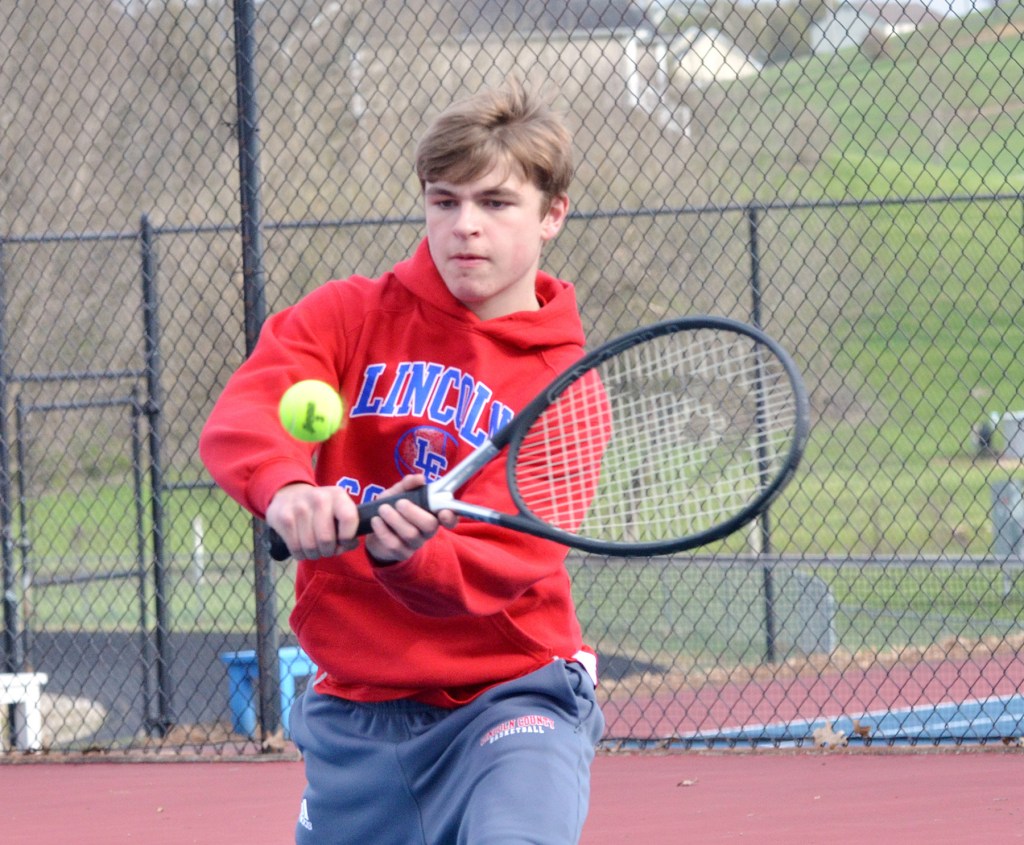 File photo LEE AMON was victorious in each of his tennis matches this past week, picking up a doubles win Colin Green at Pulaski County and a singles and doubles victory at Garrard County.

The Lincoln County Patriot tennis team racked up road wins over Pulaski County and Garrard County to move to 3-0 on the new season.

The Patriots edged Pulaski 3-2 Monday at Somerset then turned around to top Garrard 7-2 Tuesday at Lancaster.

Pulaski held the advantage in singles play, going up 2-1 over Lincoln. Baylor Mattingly, playing at the two seed for the Patriots, netted the lone singles victory with a 7-5 win over Kasen Cundiff.

The Patriots flirted at victory in singles at the three seed as Caydunn Randall challenged the Maroons’ Alex Rodriguez to a 6-6 tie. Rodriguez outlasted Randall, though, taking the tiebreaker 7-2.

Lincoln would clinch the match win with a sweep in doubles play. Carter Story and Kade Bandura, Lincoln’s top doubles team, beat Pulaski’s top-seeded team of Ethan Carter and Zach Carter 8-5 to even the match at 2-all. Lee Amon and Colin Green delivered an 8-2 win for Lincoln at the two seed to earn the Patriots the match. Amon and Green defeated Pulaski’s Adam Reynolds and Hayden Williams.

The Patriot tennis team had plenty to celebrate Tuesday at Garrard by winning seven of the nine matches on the courts.

Bandura, Amon and Gavin Fowler all posted 6-2 wins in singles play and Amon and Green partnered up for a 6-2 doubles win. Bandura earned his win over Garrard’s John Tuttle at two, Amon defeated Luke Alford at three and Fowler topped Tyler Ray at five. Amon and Green took their win at the two seed in doubles, besting Garrard’s Connor Frederick and Sean Brunelle.

All of the Patriots other wins were decided by a score of 6-1. In singles play, Green beat Jacob Norsworthy at four and Mattingly defeated Scott Cary at six. The doubles team of Story and Bandura earned the other 6-1 win at the one seed in doubles, besting Alford and Norsworthy.

Both the Pulaski and Garrard matches were boy/girl doubleheaders, with the Lady Patriot netters also taking the courts.

Lincoln (2-1) sustained its first loss Monday at Pulaski, falling 1-4. The Lady Patriots reversed their fortune and the score on Tuesday by topping Garrard 4-1.

Towle had several of her teammates joining her in the win column in Tuesday’s win at Garrard, with Towle, Grace Muse and the doubles teams of Raelyn Amon/Kaitlynn Wilks and Abby Hale/Emily Byrd all claiming victories.

Towle blanked Garrard’s Annalee Wilson 8-0 at the two seed and Muse won 8-3 over Madison Neeley at three. In doubles play, Amon and Wilks defeated Emily Gettler and Malory Watkins 9-7 at one and Hale and Byrd won 8-5 over Morgan Day and Sydney Arnold at two.