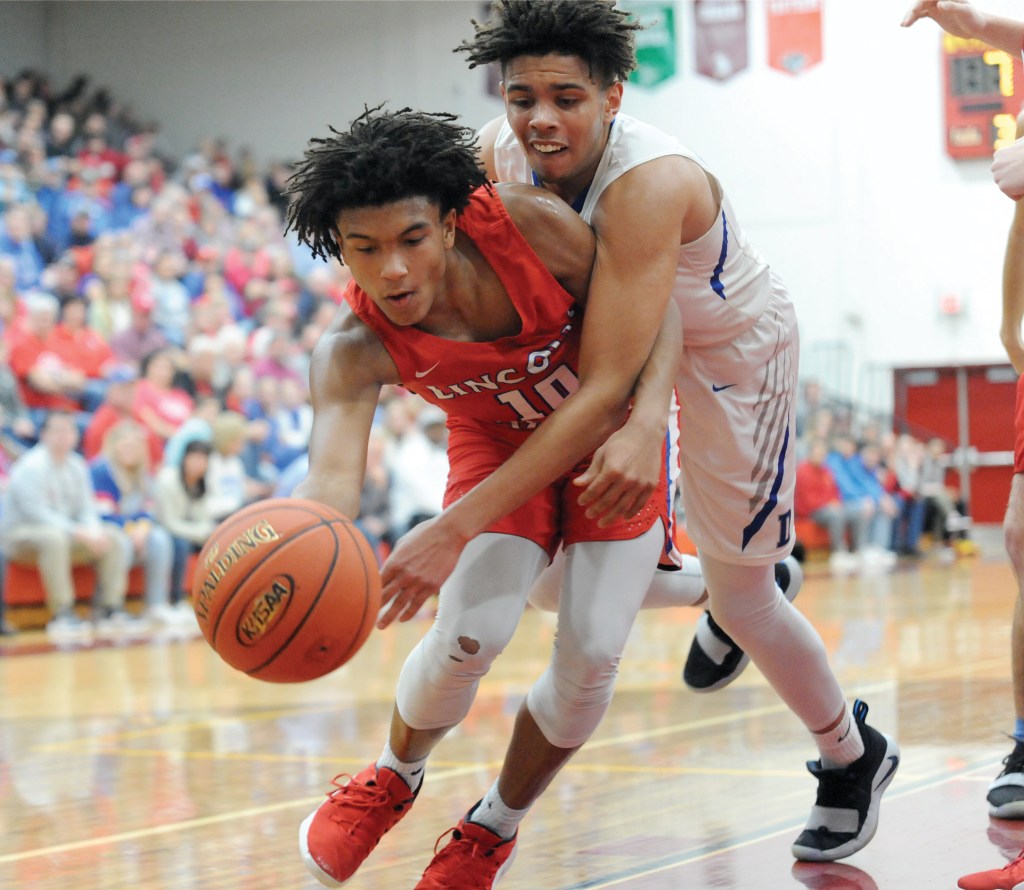 JAXON SMITH of Lincoln County has to contend with a Danville defender on his back as he works to control the ball.

LANCASTER — Jaxon Smith had one of the best games of his young high school career.
But in the closing seconds of Friday’s 45th District championship game, he didn’t drive to the basket.

He instead passed to a wide-open Blake Smith, who hit the game-winning three for Lincoln County to beat Danville 46-45.

Jaxon Smith scored 27 points in the Patriots’ victory. It was the game high and a career high for the freshman, who hit big shot after big shot.

“I like playing under pressure. It’s fun,” he said. “At the end, I just wanted to get a good look if I could and try to score, or kick it to an open teammate.”

That teammate was Blake Smith, who swung to the top of the key after Jaxon Smith drove to the right. Blake Smith connected on his only three of the game to break a 43-43 tie and put Lincoln ahead with 1.4 seconds left.

“He plays fearless and I thought he did a great job tonight,” Lincoln head coach said of Jaxon Smith. “A lot of freshmen wouldn’t take those shots but he’s not afraid to take them. The great players, they take them.”

For senior Blake Smith, he had one thought in mind when taking his game-winning shot.

“Senior, man. I didn’t want to end my last year not winning a district championship,” he said. “I have won two, I wanted a third one. Last year was disappointing. I knew as a senior I had to step up and make a big-time shot.”

Both Jaxon and Blake Smith heaped praise for each other after the game.

“I wanted him taking (the final shot), he’s a senior,” Jaxon Smith said. “I trust him the most.”

And for Blake Smith, tonight was proof of something he and his teammates feel about their point guard.

“That’s my pick for best freshman in the state, I’m taking him over anybody,” Blake Smith said.

For the first two quarters, nine players struggled to find offense. But Jaxon Smith did not. He scored 11 points in the first half to lead Lincoln to a 19-15 lead at the break. The score was 6-4 after one quarter — Jaxon Smith had all six for the Patriots.

“We knew it was going to be a challenge, we just had to come out and play hard,” he said. “We had to play as hard as them. I thought it was going to be a really slow game, lots of defense and not much offense.”
His head coach said the game was a classic in the competitive 45th District.

“It’s always a battle, all four teams in our district are very good every year,” Jackson said. “You’ve got to have a big effort, and I thought both teams played their guts out tonight. Just a great effort, great effort by our kids. I’m really proud of them, I thought we were focused. Just a heck of a win. It was a heck of a ballgame.”

In the fourth quarter, Danville senior DeShaud St. Martin began to take over: He scored 12 points in the final frame, including an 8-0 stretch where he gave Danville a 41-40 lead with 1:39 remaining.

Jaxon Smith would answer with a three of his own, making the score 43-41.

Danville’s Dante Hayden had an open look to put his team back on top, but his three from the corner rimmed out and Lincoln was able to get the ball out on the break to Elijah Frye.

Frye’s attempt at the rim was stuffed from behind by Darrian Bell, and Hayden dashed through the lane to score to tie the game at 43.

Jaxon Smith would hold the ball till the final 10 seconds, then drove to the right before dishing to Blake Smith for his three at the top of the key.

Danville called timeout right after to set up a play with 1.4 seconds left.

Zach Thornton threw the ball the length of the court to St. Martin, who made an uncontested catch and layup as time expired.

“I’ve got to do a better job explaining it,” Danville head coach Ed McKinney said. “That play is to tip it for three, when he caught it it changes it. I’ve got to take the blame for that, I’ve got to explain it better. He just caught it, usually you’re not going to catch it like that, it’s usually more of a scrum. But the play we worked on was trying to get that out for a three.”

The loss is Danville’s first in the 45th District this year and just the fifth for the Admirals all season, who will go into the 12th Region tournament as the most dangerous district runner-up.

The win for Lincoln County means the Patriots will play a district runner-up in the first round of the region tournament — which will be held at Lincoln County next week.

“Home court advantage is big time, we’ve just got to keep preparing, get ready for the next game and battle it out like we did this one,” Blake Smith said.

The Patriots know what it’s like to win a tough 45th District before hosting the 12th Region tournament: Two years ago, Lincoln beat Boyle 45-44 in the district championship game and then lost in the first round of the region tournament to Wayne County, 48-45.

“The last couple of games, we’ve played really, really hard,” Jackson said. “Hopefully we can get consistent with our effort the next game we have. Because now it’s one and done. We’ve got to be ready to play the whole time.”

“It’s good to be back home, but our region this year is wide open. There’s so many quality teams with quality players. We’ll have to battle to get things done. One game at a time, we’re going to enjoy tonight and go to the draw tomorrow and start preparing.”