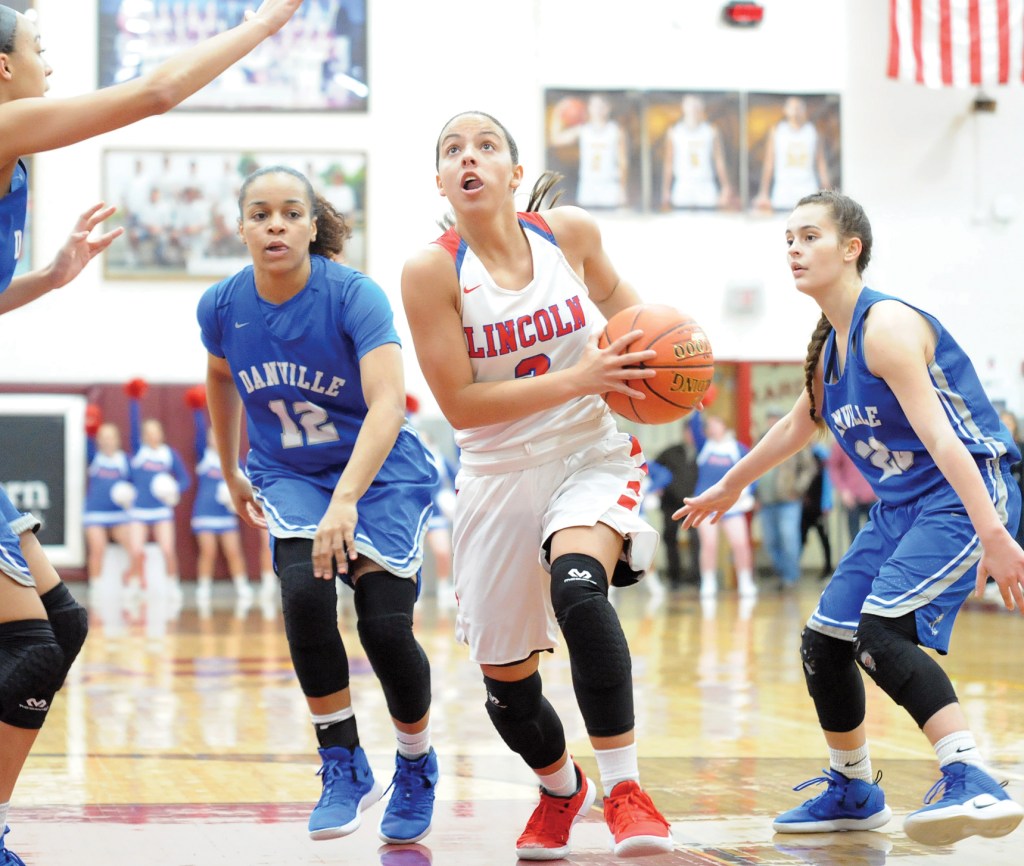 LINCOLN'S Maddy Boyle drives in the lane for two of her 22 points in the Lady Patriots' 45th District championship win over Danville.

LANCASTER — The beat goes on for the Lincoln County girls basketball team.

The Lady Patriots continued their string of district championship game success as they posted an 87-68 win over Danville in the 45th District Tournament final Friday at Garrard County Middle School.

Lincoln (23-6) has now won five straight district titles. The Lady Patriots led by as many as 24 points Friday night before claiming their latest championship win.

“We started the way we wanted to start tonight,” Lincoln coach Cassandra McWhorter said. “I saw that intensity that we had last Friday night down at Casey County with our defense. I’m really proud of the girls for the work they’ve put in all week in practice while we prepared for this game. We just went back and talked about the things that we didn’t do well the last time against (Lady Admirals). I’m just really pleased with the defensive effort and the corrections that we made, and that we came out and took care of business the way we needed to.”

Exploding out of the gates with a 19-3 run in the first quarter, the Lady Patriots seemed to be well on their way to their most comfortable win over Danville this season.

Lincoln’s trio of double-digit scorers, who combined for 70 points, more than the Lady Admirals had as a team, spurred the early run. Maddy Boyle, who finished with 22 points, and Emma King, who had 21 points, scored four points apiece in the run and Kaitlynn Wilks, who scored a game-high 27 points, tallied 11 points, including a 3-pointer with 4:06 left in the first which gave Lincoln the 16-point edge.

But the Lady Admirals (23-6) weren’t about to go away. The Akers twins, Jenna and Lara, knocked down back-to-back 3-pointers to ignite a 22-5 Danville run, which completely erased the Lincoln lead and edged the Lady Ads in front 25-24 early in the second quarter. Ivy Turner followed with a field goal and two free throws, Ahyana Burnett had a bucket and one free throw, Jenna and Lara Akers both went long range again, then Desiree Tandy converted on a three-point play to edge Danville ahead by one.

“A little fatigue set in,” said McWhorter. “I think we got a little over excited when we jumped out to a quick lead. You know a good Danville team is going to make a run there, and they did. I’m just proud of the girls for sustaining that run as they had a 1-2 punch to come back at us. We were able to respond and do the things that we needed to do to make sure that we came out on top.”

Danville was up 27-26 with 6:05 to play in the half when Lincoln responded with a 6-0 run to go on top to stay. Anna Lane scored inside to open the scoring and Boyle and King each sank two free throws to make it 32-29. Lincoln posted its largest lead of the second quarter, 41-33, after two Boyle buckets. Burnett bombed in a 3 for Danville late to cut the deficit to five, but Trinity Shearer answered with just .8 of a second to play to make it 43-36 at the half.

Lincoln’s lead was at 47-36 early in the third period after baskets in the paint by Wilks and King. Danville would whittle away at the deficit over the next two and a half minutes, though, with Tandy and Turner scoring field goals before Burnett stepped back for two 3-pointers to get the Lady Admirals within 50-46.

The Lady Patriots broke on a 13-6 scoring run over the remainder of the third to extend its lead to 63-52, and that lead never dipped below double digits in the fourth quarter. King had six points in the third-quarter run, Lane nailed a 3-pointer and Boyle and Lydia Rice had two points each.

Turner scored all six of the Lady Ads’ points in the final 3:24 of the third quarter. Turner, who had 44 points in Danville’s win over Lincoln on Feb. 8, did not reach that level Friday, but she still led the Lady Admirals’ scoring with 25 points. She had 13 points at the half.

“Ivy had an outstanding game last time and Jenna really stepped up and made big shots (26 points),” said McWhorter. “Our goal was to keep Ivy in the 20’s if we could or below, but she’s going to get hers. We wanted to try to contain everybody else, not let somebody else have a big night like Jenna did the last time. They made some big 3’s and hit some shots that made me nervous for a little while but the girls did a good job of doing what they needed to do.”

Lara Akers and Burnett joined Turner in double figures for Danville with 17 points and 12 points, respectively.

Danville would hit more 3-pointers than Lincoln Friday, bombing in 10 treys while the Lady Pats had five 3’s. But Lincoln would have a hot hand throughout the ballgame, connecting on 35 of 64 shot attempts for 55 percent. The Lady Pats also went 12-for-15 at the foul line. Danville connected on just 34 percent of its shots, going 22-for-65. The Lady Ads were 14-for-18 at the line.

The Lady Patriots really cleaned up on the glass, outrebounding the Lady Ads 38-19. Wilks finished with a double-double, combining her game-high 27 points with a game-high 12 rebounds. Zaria Napier also had double digits on the boards, getting 10 grabs. King had six rebounds. Turner also had six rebounds to lead Danville and Tandy had five.

When it came to commenting on her team’s loss, Danville coach Judie Mason had very few words.

“It doesn’t matter,” she said. “I told them before the game that it didn’t matter if we won or lost. I just wanted to play hard. So, we’re in the regional tournament and that’s all that matters.”