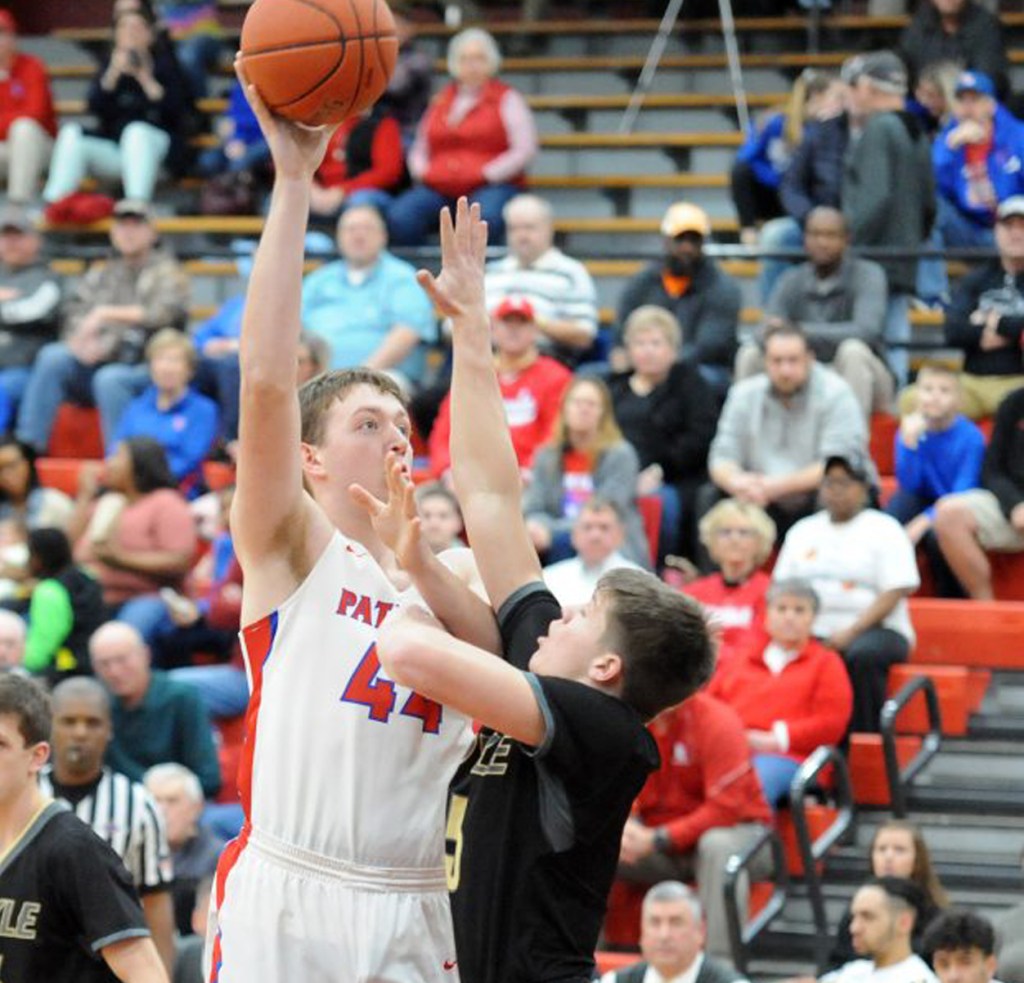 Photo by Matt Overing LINCOLN CENTER Riley Bodner put up a triple-double in the 45th District semifinals against Boyle County. He finished with 18 points, 14 rebounds and 13 blocked shots.

LANCASTER — Wednesday’s first-round game proved to be a coming out party for Lincoln County’s Riley Bodner.

The 6-8 junior center, who has averaged 5.9 points, 7.9 rebounds and 2.3 blocks per game this season, finished with a triple-double in the postseason opener. He scored a team-high 18 points, hauled in 14 rebounds and blocked 13 shots as the Patriots handed Boyle County a 72-60 loss in the 45th District Tournament semifinals at Garrard County Middle School.

“Every night I just come in and try to play my hardest. I put in a lot of work. I stay in the gym a lot. Tonight it paid off,” said Bodner. “Tonight I was just hitting my shots. Tomorrow it could be somebody else. Tonight, it was me.”

Lincoln coach Jeff Jackson had a big pat on the back for his starting center.

“Riley stepped in and had a huge game for us at the right time. A huge game,” he said. “He really stepped up tonight for us on both ends of the floor. Hopefully we can build on that and progress as we go forward and try to get ready for a tough game on Friday (district final).”

Lincoln (19-12) will face Danville, a 73-64 winner over Garrard County, in Friday’s title game at 7:45 p.m. The win also earns the Patriots a berth in next week’s 12th Region Tournament, which is being played at Lincoln.

The fact that the Patriots get to play at home again was an impetus for Bodner to help Lincoln survive and advance Wednesday.

“I’m really close with a lot of the seniors so I just went out there and laid it on the line for my guys,” he said. “I didn’t want it to end. I wanted them to play at home again.”

Bodner scored half of his 18 points in the first quarter, tallying the first six in the early minutes of the first quarter to help Lincoln to a 12-3 lead, constantly attacking the paint. He had three defensive boards and a block during the opening run.

“We wanted to get out to a good start and they got the ball to me inside and I just took my shots,” Bodner said. “I didn’t really think about how much I was scoring or anything. I was just playing my game.”

The Patriots never relinquished the lead. Their lead was 19-12 at the end of the first, 38-29 at the half and 49-40 heading into the fourth quarter. They led by as many as 14 points in the final frame.

“We shared the ball and made some cuts out of our offense and got some good shots,” said Jackson. “I thought our defense was good and I thought Darius (Napier) and Bryson (Yaden) gave us a good lift off the bench. I was really proud of all our kids tonight.”

Lincoln had already scored eight points before Boyle got on the scoreboard. Luke Imfeld, who led Boyle with 19 points on 7-for-13 shooting, 5-for-11 from 3-points out, drained the Rebels’ first bucket, and his first trey, with 5:08 to play in the first. Boyle was as close as 14-10 with 1:24 showing after Will Imfeld, who scored 16 points on 6-for-14 shooting, nailed the first of his two 3-pointers.

Bodner answered with a three-point play and Blake Smith turned a Bodner block into a fast-break layup for a 19-10 margin with less than a minute to play in the first. Caleb Jackson would hit for Boyle in the closing seconds to make it 19-12.

Lincoln’s lead wavered between six and nine points for most of the second quarter. Jaxon Smith would bomb in a 3-pointer then add a free throw toss for the Patriots’ largest lead of the first half, 25-15, two minutes into the second period. Boyle would get as close as 29-26, however, after buckets by Jackson, Luke Imfeld and Reese Smith and a Will Imfeld putback, which he followed with a 3-pointer to make it a three-point game with 2:41 on the clock.

The Patriots distanced themselves from the Rebels over the remainder of the period, though, closing the half on a 9-3 run. Bodner, Blake Smith and Frye had a bucket apiece in the run and Jaxon Smith converted on a three-point play to put the Patriots up 38-29 at the half.

The margin remained at nine at the close of the third quarter as well, with Lincoln and Boyle both scoring 11 points in the period to make it 49-40 after three.

Will Imfeld scored the opening bucket of the fourth quarter to pull the Rebels within 49-42 only to have Lincoln answer with a 7-0 run. Blake Smith opened the run with a bucket in the paint, Frye followed with two free throws and Jaxon Smith closed with a 3-pointer for the Patriots’ largest lead of the game, 56-42, with 5:48 left to play.

Lincoln’s lead never dipped below 10 points in the fourth quarter.

“It was a good win. I’m really proud of our kids,” said Jackson. “I thought our focus was good tonight. We had too many turnovers (17), but I thought we did a good job on the glass. It’s just a good rivalry.”

“We’ve just got to get mentally ready and be prepared,” he said. “We’ve got to go home and rest. We can’t be messing around. We’ve got to come in and have a good practice and get ready for whoever we play.”