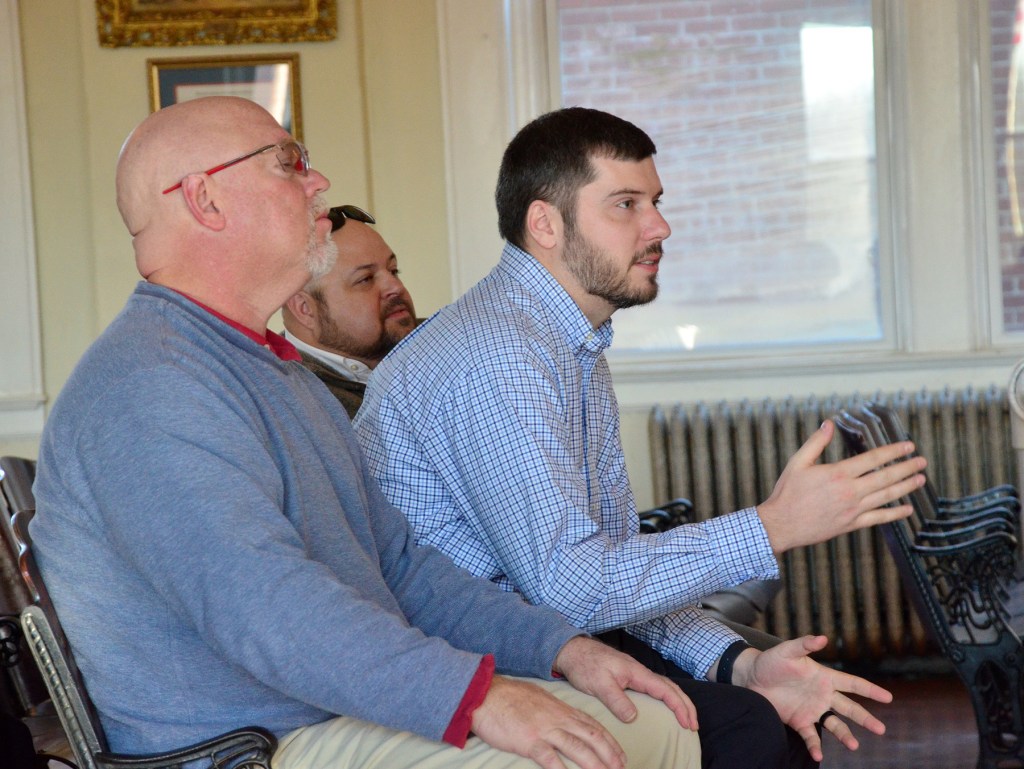 Photo by Nancy Leedy JORDAN KELSEY, who will be opening Modern Crop, Lincoln County's first hemp producting plant, addresses the Lincoln County Fiscal Court after the second reading was approved on changing the proposed Bowen Road site from A-1 Agriculture to Light Industrial. At left is Doug Gooch of AGE Engineering Services Inc.

STANFORD — County officials approved a zoning change to allow for what will be the first hemp processing plant in Lincoln County.

The Lincoln County Fiscal Court approved the second reading of a zone change Tuesday morning, paving the way for construction of a light industrial plant at 3255 Bowen Road.

The 14.109 acre-tract, situated between the railroad and U.S. 127 near Moreland, had been zoned A-1 Agriculture.

Doug Gooch, owner of AGE Engineering Services Inc., spoke on behalf of Jordan Kelsey and his company, Modern Crop, at the Jan. 8 meeting of the court when the first reading on the zone change request to Light Industrial was reviewed and approved.

“A Lincoln Countian has gone off and got educated and he’s come back with a great idea,” Gooch said of Kelsey. “He’s going to be one of the first hemp processing plants in this region. There’s a couple in Winchester that are just doing gangbusters.”

“It’s basically a piece of property that is zoned agricultural right now. Between railroad and U.S. 127. It’s cut off from everything else … We’re going to light industrial.”

While the thought of new industry moving in conjures thoughts of potential noise, smells and heavy traffic, Gooch says that won’t be the case.

“The process doesn’t create noise. When we’re drying the product in the fall, it might create a bit of an odor, but nothing major,” he said. “We’ve explained the process to planning and zoning. We had a couple residents that adjoined us come and ask questions and had no opposition. A lot of curiosity, but no opposition. I think we were able to explain everything.”

Modern Crop wants to be as non-intrusive as possible. Kelsey said the plant will start small with two buildings about 55 x 100 planned and an office area at front. “Hopefully we can grow from there.”

“The site design keeps the structures back, kind of off the road,” Gooch said. “We will not generate any kind of traffic during the harvest. There will be several trucks in and out but the product leaves in very small containers. It gets compressed down to a fine white powder that is very expensive but very small, so we don’t need a bunch of traffic on the road. I think it’s a really good project for the county. It’s a significant investment for the county.”

“I think it’s a good product with low impact to the rest of the community.”

Kelsey took questions from the court on his Modern Crop business, the first of which was on how many jobs the plant would create.

Magistrate Joe Stanley was curious about what part of the plant Modern Crop would be processing.

CBD is a cannabis compound that has significant medical benefits, but does not make people feel “stoned.” It is thought that CBD actually counteracts the psychoactivity of tetrahydrocannabinol (THC). THC is the main active ingredient of cannabis.

Farmers will harvest the hemp crop, cutting stems off the stalk and putting in big totes, and Modern Crop will receive it at the facility and will dry it.

Farmers producing the hemp will be paid in different installments, according to Kelsey.

When asked by the court if Modern Crop will be processing this year, Kelsey answered, ‘Yes.’

The plant will not be getting any hemp from local farmers for the first processing season at least, but Kelsey said that should change.

“We have a few we’re working with in Lancaster right now, but we’re looking for more farmers every day,” he said. “Longterm, of course, we want to work with people in Lincoln County, but this year it’s just who we can kind of grab a hold of.”

An application process required by the state to grow the crop this season was from October to November of 2018 and no local growers completed the process.

“I’m sure we will get Lincoln County farmers, but the application period has come and gone for the season that runs from this spring to fall,” Kelsey said.

Having been to other hemp processing plants, Lincoln Judge Executive Jim W. Adams Jr. said he felt good about the new industry.

“I’m excited about it. I toured the one in Winchester. It’s a huge operation. It’s just getting off the ground,” he said. “I think you’re getting in at the right time.”

Stanley made a motion to approve the zone map change on the 14.109 acres on Bowen Road from agricultural to light industrial. Lonnie Pruitt seconded the motion and Stanley, Pruitt, Jeff Ruckel and David Faulkner all voted ‘Yes’ to approve it.