Ads use size advantage for first win at LC since 2005 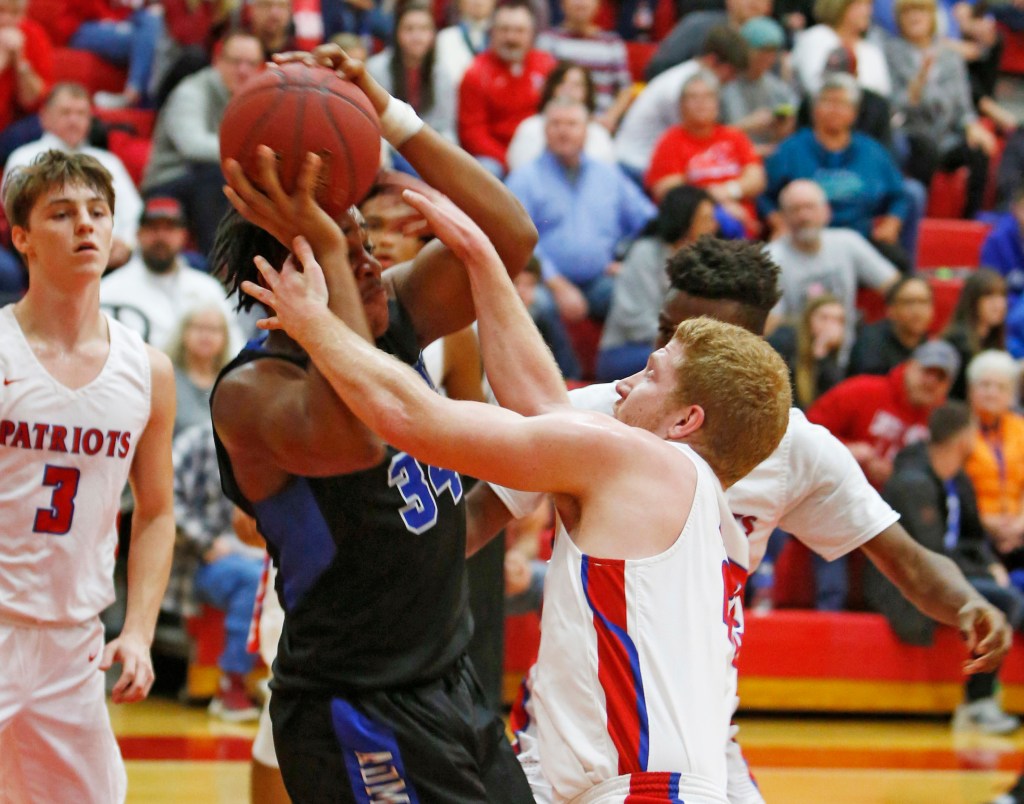 STANFORD – It was just one of six district games, and the first one at that, but Danville coach Ed McKinney knew full well how significant it was.

McKinney knows how difficult it can be to win at Lincoln County, and the Danville mentor said that’s what made the Admirals’ win here Friday night so satisfying.

Danville controlled the second half for a 63-47 victory over Lincoln in the 45th District opener for both teams and the first road win for the Admirals over the Patriots since the current players were in diapers.

“It felt kind of like a regional game – these seed games are that way,” McKinney said. “When you beat Lincoln, they’re going to do things right, they’re well coached, they’re ready for you, they’ve scouted you, they’re prepared, their kids are prepared. So when you get a win here against them, you always feel good about it because you know you beat a good program.”

Danville, which has the best record in the 12th Region at 13-1, took control of the game by outscoring Lincoln 21-6 over the third period and half of the fourth. The game had been tied at 30-all at halftime, but the Admirals led 51-36 by the time that run had ended.

The Admirals had lost their last 15 games at Lincoln’s J.C. Eddelman Gymnasium since last winning here in January 2005 and had won only six of 33 meetings between the teams at any venue in the 13 seasons since.

Scoring balance – Four Admirals scored in double figures, led by Dante Hayden with 13 points and Zach Thornton with 12, and six had eight or more points.

“That’s been our strength all year. That’s hard to defend,” McKinney said.

Offensive rebounds – The Admirals got 13 of them – and outrebounded Lincoln 32-20 overall – to give themselves a slew of second chances. All five of Darrian Bell’s rebounds came from the offensive glass.

“The No. 1 key on our board in (the locker room) was keep them off the glass,” Lincoln coach Jeff Jackson said. “You’re not going to win many games against quality teams giving up (that many) offensive rebounds.”

Defense – Lincoln made 10 of its 19 shots from the field in the first half but was just 6 for 21 in the second, and it also had seven of its 11 turnovers after halftime. The Patriots had only one field goal and four points in all in a span of 10:16 in the third and fourth quarters.

Danville took the lead with a run of nine straight points midway through the second half. Hayden hit two 3-point shots during that run, the second of which put the Admirals up 39-32 with 3:22 remaining in the third quarter.

Lincoln’s Jaxon Smith stopped the bleeding with a 3 of his own, but the Admirals answered with a 12-1 run that stretched past the midpoint of the fourth quarter.

The Admirals went 7 for 10 from the field in the fourth quarter to finish at 50 percent, and they even hit six of eight free throws after missing six of eight over the first three periods.

Blake Smith hit three 3-pointers for Lincoln (9-6) over the final 3:40, but the Patriots got only one other field goal during that span. Blake Smith led Lincoln with 14 points, and Jaxon Smith added 13.

Lincoln shot 37 percent from the field after going 12 for 19 in the first half.

The lead changed hands four times in the first half, with Danville scoring six of the last eight points – Bell got the last four – to erase a 28-24 deficit with starters Thornton, St. Martin and Kavanaugh on the bench.

Ethan Wood came off the bench to score eight of his 10 points in the first half, and Bell and Hayden had four each.

“I was pleased with where we were, because I thought we had to go through a lot,” McKinney said.