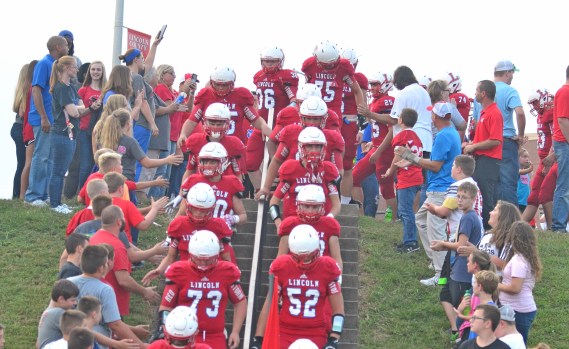 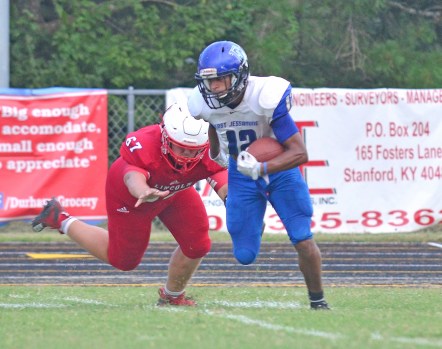 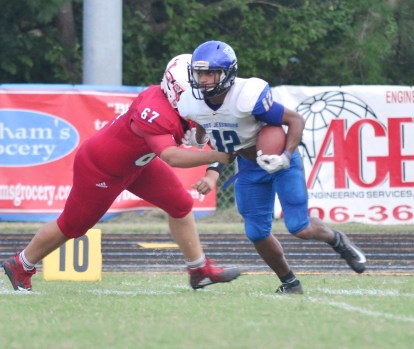 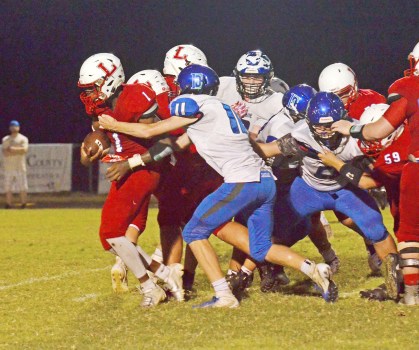 Photos by Nancy Leedy LINCOLN’S Darius Napier (1) drags East Jessamine linebacker Connor Darby along with him on this first half carry. The senior back finished with 62 yards rushing and a touchdown on 11 carries and caught four passes for 88 yards and a TD in the homecoming night win. 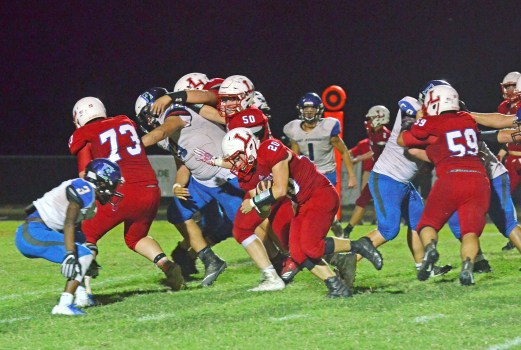 STANFORD — Lincoln County celebrated its Homecoming on Friday with its third consecutive win, a 38-28 victory over visiting East Jessamine.

“I’m excited for them. Three in a row – that’s big. We can count that as a winning streak now,” Lincoln coach Spencer Crutchfield said. “Definitely proud of those guys and happy for them. I can’t say enough. They’ve put in a lot of hard work and have not had a lot of success here lately. It’s time that these kids, putting in the work, that they are able to see when you go to work everyday you get results.”

Lincoln never trailed in the game, with Darius Napier, who finished with 62 yards rushing and a touchdown on 11 carries and caught four passes for 88 yards and a TD, scoring the first of his two touchdowns on the Patriots’ first play of the game. Napier returned an East Jessamine punt from the Lincoln 40 to East’s 12, then scored on the following play for a 7-0 lead with 10:36 still to play in the first period.

Lincoln couldn’t hold East (1-3) off in the first half as the teams practically traded scores throughout the first and second quarters.

Valdon Miles got the Jaguars on the scoreboard with 1:08 left in the first quarter, capping off a 13-play drive with a 12-yard score to make it 7-6.

Less than 30 seconds into the second quarter, Napier was back in the end zone. A 25-yard pass from Bryson Yaden to Sawyer Carrier set Lincoln up at the East Jessamine 22. Yaden hit Napier with a jet sweep pass down the left sideline on the following play and Napier scored on the play. However, a holding penalty on the Patriots negated the run and moved the ball back to the 29.

Not to be denied, Yaden, who went 10-for-14 for the night for 169 yards, hit Napier for the exact same pass on the next play, except Napier ran down the right sideline this time to score – and this one counted. The Loren Melton point after kick made it 14-6.

East’s Dylan Moore, who rushed for 65 yards on eight carries, ran 35 yards for a touchdown with 1:21 left on the clock to cut into the Lincoln lead. Isaiah Williams then hit Moore for the two-point conversion to make it a 17-14 ballgame.

Lincoln would push its lead back to 10 points before the half. Zack Hazlett set the Patriots up with a short field with a 51-yard punt return to the East Jessamine 29. Yaden connected with Carrier for an 11-yard first down pass to move the ball to the 9. Two plays later, with just 10.8 seconds on the clock, Yaden carried the ball in from the 2 for a 24-14 halftime lead.

The Patriots led by as many as 24 points before moving on for the win.

Dylan Burchfield, who rushed for 53 yards on 18 carries, bulldozed his way in from the 2-yard line a minute and a half into the second half to make it 31-14 and Yaden threw for his second TD pass with 9:16 to play, hitting Nick Harris for a 6-yard score and a 38-14 lead.

East Jessamine chipped away at the Lincoln lead in the fourth. Cameron Segar, who led the Jaguar rush with 72 yards on 18 carries, pushed in a 1-yard touchdown with 6:06 left in the game and quarterback Cameron Garrett hit Isaiah Williams for a 17-yard touchdown pass with 35.3 ticks on the clock for the 38-28 final.

“We definitely didn’t play well tonight, but we played hard and you can overcome a lot when you play hard,” said Crutchfield. “We’ve got to clean up some stuff. It’s like I told the kids,’We’ve just got to come into work Monday and get better.’ That’s the key, if we can come in and get better day in and day out, we’re going to be okay. We’re going to be where we need to be at the end of the season.”

East outoffensed Lincoln Friday, racking up 330 yards offense compared to Lincoln’s 306. The Jaguars had 225 rushing yards and Garrett was 6-for-18 for 105 yards. The Pats had 137 rushing yards. Yaden rushed for 17 yards on six carries and senior running back Ethan Carman had four yards on one carry before going out with a knee injury early in the game.

Crutchfield said physicality has been the norm for Lincoln in its early games.

“That’s three games in a row that we’ve played physical games,” he said. “Our kids are taking a little beating, it is bumps and bruises. We may have lost Ethan for the year. I hate that because he’s one of our senior leaders. We’re going to get his knee looked at. Whoever’s up next has to step up and fill his role.”

Carman was one of four players removed from the field due to injury Friday. Napier sustained an injury just before the half but did return to action. But two East Jessamine players, DJ Jones and Jarrel Starling, had to be removed by ambulance.