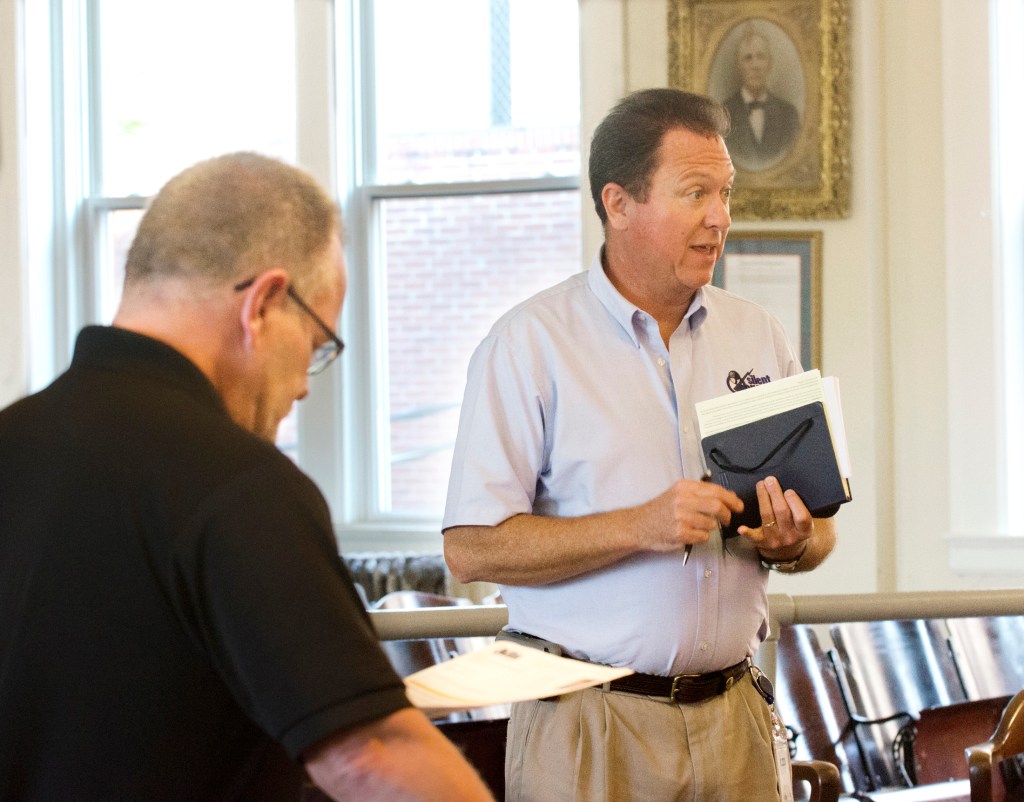 Photo by Nancy Leedy JAILER Rob Wilson, left, looks over the bid for new surveillance cameras in the Lincoln County Regional Jail as Steve Jenkins, a representative for Silent Guard of Somerset, explains what the bid entails to the Lincoln County Fiscal Court.

The three-story building, which was built around 1940 in downtown Stanford, consistently books almost twice as many inmates per day as the 72-bed facility can accommodate and has been troubled with inmate violence because of the difficulty of adequately supervising the inmates.

Lincoln County Jailer Rob Wilson and his staff have had help monitoring the jail with a surveillance video system in place, however, the system still left some areas unmonitored.

““We’ve got some blind spots inside the jail where there is potential for mischievousness, danger to staff and inmates,” said Wilson.

That’s about to be remedied, though, as the Lincoln County Fiscal Court accepted a sealed bid of $24,993.94 from Silent Guard of Somerset to add additional cameras to the facility.

Wilson recommended the court accept the bid after it was presented to him for review.

“Some of these cameras will go into these blindspots and the others are going into cells,” he said. “$24,000 – we’re probably going to spend that much this year on building maintenance. Part of that is because we have no access to visually check the cells other than to physically go in. So, when we’re not in those cells, everything in the jail is exposed – the plumbing, the conduit. Inmates are simply reaching up and tearing stuff up. So if we’ve got cameras in the cells, that’s going to give us an opportunity to find out who tore what up and charge them for it.”

Silent Guard is a company that Wilson and the Lincoln County Fiscal Court are very familiar with.

“We came in last year and cleaned up the equipment and got it to where it was a usable system. Now they have a system that the clarity is really good,” said Silent Guard representative Steve Jenkins.

And it’s about to get even better. The quote of $24,993.94 includes the installation of two 6-terabyte recorders and 25 new cameras with audio. There are also a couple IP switches involved with that and two 32-inch monitors that Silent Guard proposed to view the cameras on.

“We did a walk-through with them and determined where they needed these additional cameras placed,” Jenkins said. “This is an IP camera system, 4-megapixel quality. The last time we worked with you guys there was some high definition analog cameras in place and we went ahead and utilized the coaxial cable and as much of that equipment as we could.”

Wilson said he has been impressed with the quality of Silent Guard’s work.

“With the old system we had, we had video but it was so grainy that you couldn’t tell who was who most of the time,” he said. “The one we have now is like being in this room. It’s as clear as day. You can zoom in on them.”

“This is an add-on of 25 plus what we already have, which gives us around 40 cameras.”