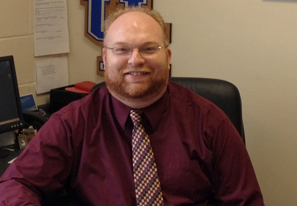 STANFORD — It’s a bittersweet transition for James Carrier, as he plans to bid farewell to his post at Highland Elementary School and take on a new role as principal of Stanford Elementary.

Carrier, who has served as principal of Highland Elementary since Jan. 2013, was selected for the principal position at Stanford Elementary last week by the School-Based Decision Making council.

While he’s excited about the new opportunity, Carrier said his emotions are mixed as he also leaves behind the close-knit community and school he has come to know and love.

“It is hard. I have mixed emotions. I love my Highland family, love my Highland students. The community here has been very supportive of me and of the school, in general,” he said. “I have received calls and emails over the last few days of people wishing me the best, but also hoping for the best for this school, as well.”

In his five-and-a-half years at Highland, Carrier said improvements made in math and reading scores across the school is what he considers to be one of his and the staff’s biggest accomplishments.

“That was one of my goals when I came here, to have kids reading on grade-level, so that is something we have constantly worked on and the data shows we have made improvements there,” he said.

Transitioning into new math curricula and programs has been one of the challenges Carrier said he and the Highland staff have faced during his time as principal and still, those scores have also seen improvement.

As far as advice for the next principal of Highland Elementary, Carrier said he would encourage the new school leader to continue to support the staff and build upon what they have accomplished.

“I believe with continued work that this school can be a top school in the state,” he said. “There is a great staff in place here. They are professionals. They work very hard. I would say, ‘Continue to build on programs, not just what I put in place, but what the staff (and I) chose together to put in place. Continue to build on that and take the school to the next level.’”

Carrier said he will continue to focus on Highland students and staff for the remainder of the school year before preparing to take over as principal of Stanford Elementary.

“We are excited to have a veteran administrator with a strong academic background as the new principal at Stanford Elementary,” Rowe said.