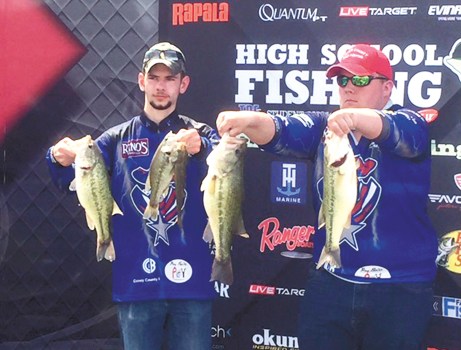 Photos submitted by Street Spoonamore LINCOLN COUNTY’S team of Zach Spears, left, and Benton McKnight secured themselves a berth in the upcoming state bass fishing tournament by placing ninth out of 63 boats at the Region 3 Bass Fishing Championships. 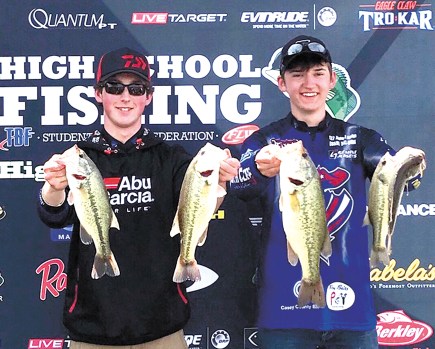 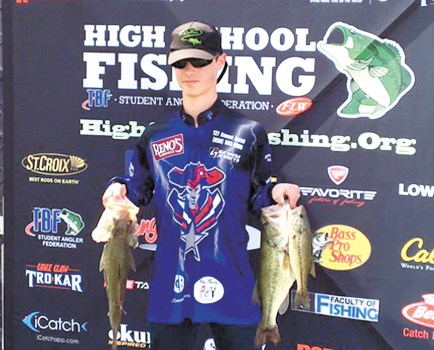 AARON COOK and Zane Rousey, not pictured, will put their boat in the water at Kentucky Dam Marina May 11-12 as they compete in the 2018 KHSAA State Bass Fishing Tournament.

The Patriot team put three boats in the water at Green River Lake in the Region 3 Bass Fishing Tournament and all three caught enough weight in fish to earn a spot in the state tournament, which will be May 11-12 on Kentucky Lake in Gilbertsville.

The top 17 teams out of 63 boats advance to state.

The team of Aaron Cook and Zane Rousey had the next best haul for Lincoln, reeling in three fish weighing 10.20 pounds to place 15th. Their top catch also weighed 5.30 pounds.

Rounding out the list of state-qualifying teams was Lincoln’s team of Mason Moore and Hunter Cornelius. The two caught five fish weighing 9.60 pounds to earn the 17th and final state-qualifying position. Their biggest bass was 3.90 pounds.

South Laurel finished 1-2 in the region tourney. The team of Ethan Baker and Brian Longworth caught five fish weighing 19.40 pounds to win the title and their teammates, Shawn Coots and Landon White, claimed the runner-up spot with a five-fish weight of 18.50 pounds. The Baker/Longworth big bass weighed 5.90 pounds, while the Coots/White team caught a 6.60-pounder.

The Taylor County team of Peyton Cox and Shawn Mills, which did not qualify for state, did earn some recognition at region by reeling in the competition’s biggest bass.  The fish, their only catch of the tourney, weighed 8.40 pounds.