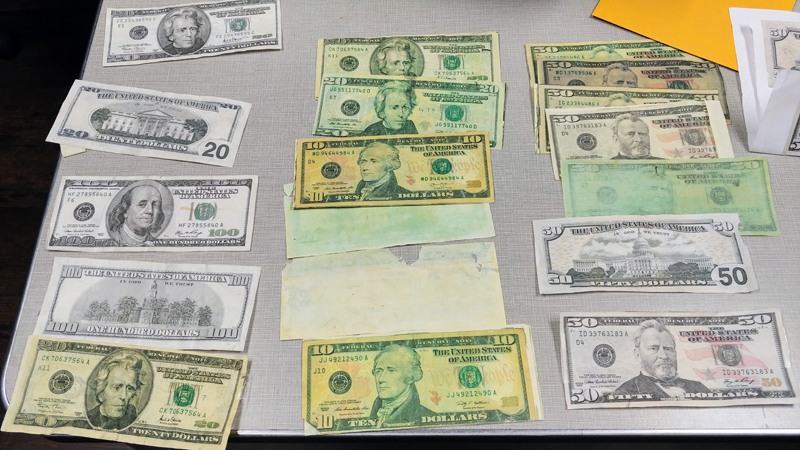 Photo by Abigail Whitehouse A table of counterfeit U.S. paper currency sits on display at the Stanford Police Department after officers made an arrest. 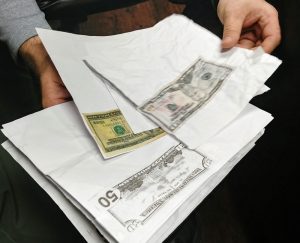 The arrest was made during the course of a narcotics investigation, according to Police Chief Zach Middleton.

“Last week I was notified by the Special Operations Unit that during the course of a narcotics investigation, we received information of where counterfeit bills were being produced,” Middleton said. “In the last couple of weeks, our number of complaints regarding counterfeit bills were from two local businesses.”

While conducting a traffic stop, $260 of counterfeit currency was located in a black baggie in the console of the truck, Investigator Ryan Kirkpatrick said.

After further investigation, police determined where the money was being made and obtained a search warrant for a home on Ky. 698.

Melissa Cress, 47, was arrested April 12 and charged with 43 counts of first-degree forgery, a Class C felony.

“When we made entry into the residence, we found counterfeit currency being dried. It was hanging over a space heater,” Kirkpatrick said. “We also found the female actively throwing away printed paper.”

Cress was the only person in the residence at the time the search warrant was executed. Police seized five laptop computers and a Canon printer.

The street value of the counterfeit currency was $2,150, Kirkpatrick said.

Cress had been released from custody as of Wednesday this week, according to the Lincoln County Regional Jail website records.

“We have worked with the U.S. Secret Service on this (case),” Kirkpatrick said.