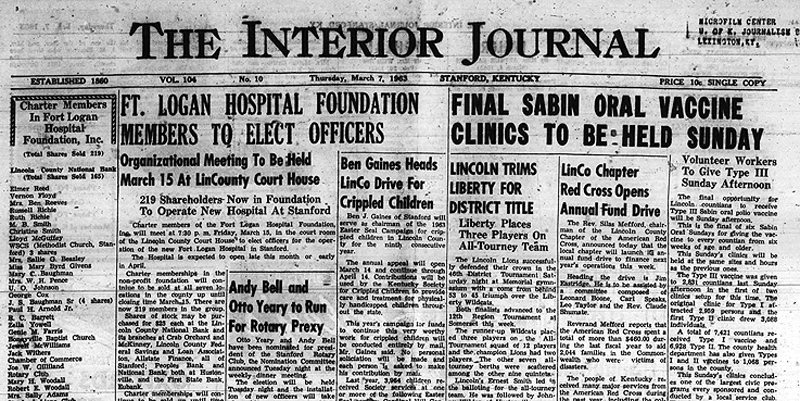 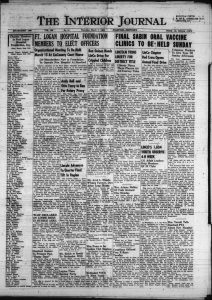 Lady Patriot basketball player Dionne Givens became the second leading scorer in Lincoln girls’ history when she surpassed the 1,000th career-point mark in the team’s 79-30 win over Kentucky School for the Deaf in the 45th District Tournament semifinals. Cassandra Alcorn led Lincoln in the win with 18 points, Jill Baird followed with 12 points and Givens finished with 11 points.

The Lincoln County Fair Board announces it has taken a 99-year lease on 35 acres along U.S. 27, south of Stanford, and will move the site of the annual fair this year. The fair has been held at the Farm Bureau Youth Center on Harmon Heights, a site that is considered too small and close enough to disturb two residential neighborhoods. The new site, situated a couple miles south of Stanford at the foot of Halls Gap hill, was purchased by the Lincoln County Farm Bureau for $40,000 and leased to the Fair Board for $1 a year.

The E.D. Bullard Co., the hard-hat maker that purchased the former Cowden Manufacturing plant in Stanford, opened its doors on Monday, March 28 and began training the first six of what could build to 100 employees by the end of the year. The plant on U.S. 27 primarily will perform sewing and preassembly work for the company’s main factory in Cynthiana. Mike Bean, plant manager, said the company has already hired 12 employees and will be hiring more as sewing machines and work tables are delivered and as the work demands.

Robert Embry, conservation officer, declares war on dogs running loose in the Hubble area. The dogs are chasing the deer.

Murphy Motors celebrates its 18th anniversary as the Ford dealership in Stanford.

Mr. Hugo Schnitzler, who had just returned with his wife from a visit with friends and relatives in Germany, spent time in Stanford talking over his experience. He said conditions in Germany improved wonderfully, but that there was still much that must be done for the country to get back on its feet. Food and clothing are plentiful and prices are comparable to those in this country, but the money is hard to get. Taxes are much higher. There is a tax of four dollars on a pound of coffee, so they don’t drink much coffee. Beer, however, is more plentiful and sells for about 17 cents a sixth of a gallon. Mrs. Schnitzler has three sisters and a brother still living over in Germany and he has a lot of first cousins. When asked about the political conditions in Germany, Mr. Schnitzler expressed the opinion that the German people would never return to a nazi or totalitarian form of government, saying they have got their fill of war and want nothing but peace but they are afraid of the Russians. He said West Germany is already full of refugees from East Germany and more are coming daily.

Everyone agrees that killing fish by dynamite and other means is a somewhat unsportsmanlike act. But to drain a pond, wade in and knock them in the head has never had repedent as the scale of what happened on the Maret Hackley farm as far as can be determined. The large valuable pond, only one of several on the Hackley farm to withstand the dry season last summer and fall, was drained by men digging trenches – five to be exact – about eight feet deep and 20 feet in length, letting the water run loose from the 150 feet wide and 300 feet long pond so they could kill the floundering fish. Game Warden Sam Embry estimated it took the men or man about a week of hard digging during the night to dig the trenches. A neighbor told the Hackleys the pond was going dry and they called in the game wardens.

Tobacco farmers vote on whether to join a marketing system that will limit their crops to a poundage allotment set by the government. It passes throughout the state and by a margin of 1,890 to 104 in Lincoln County.

Delbert Stempfly purchases the 94-acre Cusic farm near Ottenheim for $2,000.