Lincoln search and rescue thanks Stanford Lions for radio funding 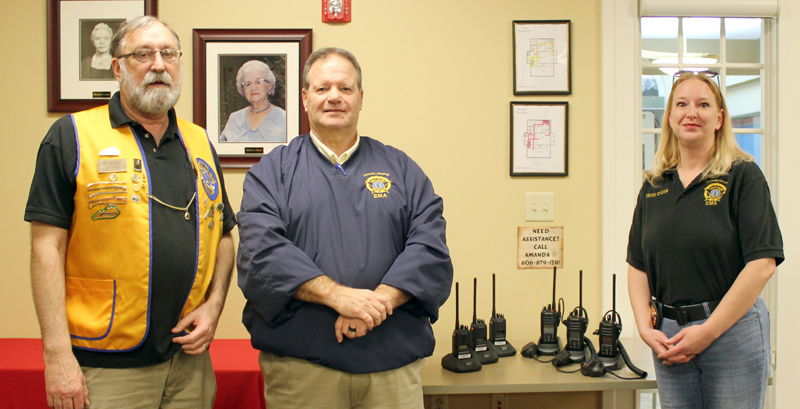 STANFORD — Radio equipment is essential to search and rescue efforts and thanks to the Stanford Lions Club, the Lincoln County Search and Rescue team has new radios to improve communication during rescue response.

It’s a capability that the team has never had before, Gilliam said, and even exceeds the capabilities of other first-responder agencies.

“With emergency management, when we’re called, it’s usually something pretty serious. So, that is an excellent tool. Three of these radios have that capability,” he said.

When purchasing the three radios, Gilliam said the company donated an additional three radios, which can communicate with team members and dispatchers.

“We just really want you to know that we appreciate it,” he said to the room full of Lions Club members. “This is equipment that we just couldn’t get. There are grants available to search and rescue but they’re very competitive.”

Gilliam and O’Quin thanked the group again and invited them to check out the new radios on display.

“Its something that we’re going to make use of and probably will more than likely be a part of saving a life,” Gilliam said.

Lions Club member Renee Knies also thanked the pair for their service to the county.

“Honestly, we can’t say thank you enough for all that you guys do,” Knies said.

Gilliam said search and rescue members do not get paid and they don’t charge for services.

“We generally have eight-to-10 call outs a year and last year we had 19,” he said. “The last one we had, our search coordinator for the county Billy Hester saved a two-year-old child’s life. If he hadn’t found him, he would’ve frozen to death.”

O’Quin said search and rescue volunteers were thrilled to learn of the new radios.