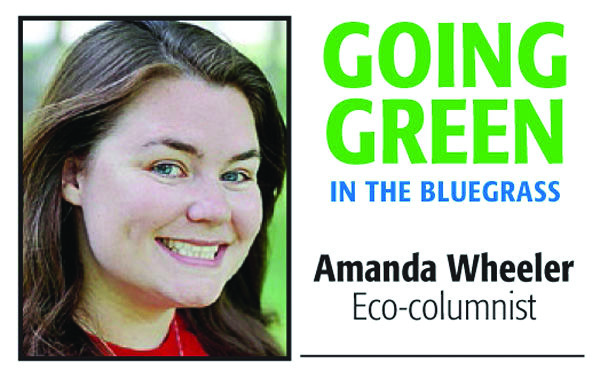 Going Green in the Bluegrass

There are a lot of environmental problems we read and hear about every day. It can be pretty overwhelming. Oil spills, unsustainable foresting, species going extinct, natural areas disappearing, climate change threatening to devastate cities and whole economies — there’s a lot out there that can make you feel like there’s no hope.

I’m sure many of you have experienced the same feeling I have — that there’s no way I can change anything for the better. It’s hard to see how I could change something so huge as global climate change or people on the other side of the planet destroying environmentally essential rainforests.

But the truth is you are either part of those problems or part of the solutions. Any effort big enough to fix a major environmental problem is going to take millions or billions of people to accomplish. You can look at yourself as “just” one when millions are needed; or you can look at yourself as being one of the millions helping, rather than someone who is adding to the problems.

If you’re not the head of a giant corporation, you don’t have enough power on your own to require that the corporation follows environmentally sustainable practices. But you, along with all the millions of others in the world who care about the future of our planet, do have enough power to tell corporations you won’t buy their products if they harm the Earth.

On your own, you can’t stop important species from going extinct in exotic locations far away from central Kentucky. But you can help prevent the exotic pet trade from being profitable by never keeping non-domesticated animals as pets and telling your friends how the exotic pet trade can really mess up food webs and eco-systems all around the planet.

Climate change is the biggest of all the problems we face today, and no one person is going to fix it no matter how much power they may have. The only solution is change in human behavior on a global scale. But we can’t sit around waiting for large-scale change to just happen — the big changes needed will only happen after enough individuals make changes on their own.

If enough people in the world realize the dangers of climate change, commit to fighting it and demand that their governments fight it as well, then we can solve the problem. But we only get to that point one individual change at a time.

If you want to be one of the millions working for positive change, there are lots of ways you can take action:

• Recycle everything you possibly can, not just the easy stuff that you can take to your curb. Take plastic bags and CFL bulbs back to stores that offer recycling; find the appropriate place to take used batteries; take old worn-out clothes to thrift stores that can recycle the fabric.

• Grow your own food and buy from farmers markets and local food producers whenever possible. This reduces the transportation cost of your food and often means far less plastic and other types of packaging.

• Refuse to buy products that come in excessive amounts of packaging, that are made with unsustainable products, or that are for one-time use.

• Never accept straws or other one-time use products from restaurants, and tell people it’s for environmental reasons if they ask.

• Only buy as much food as you will eat. Food waste is one of the largest contributors to greenhouse gases.

• Eat less meat and schedule meatless meals. The production of meat is a major contributor to climate change.

Where to drop off old eyeglasses