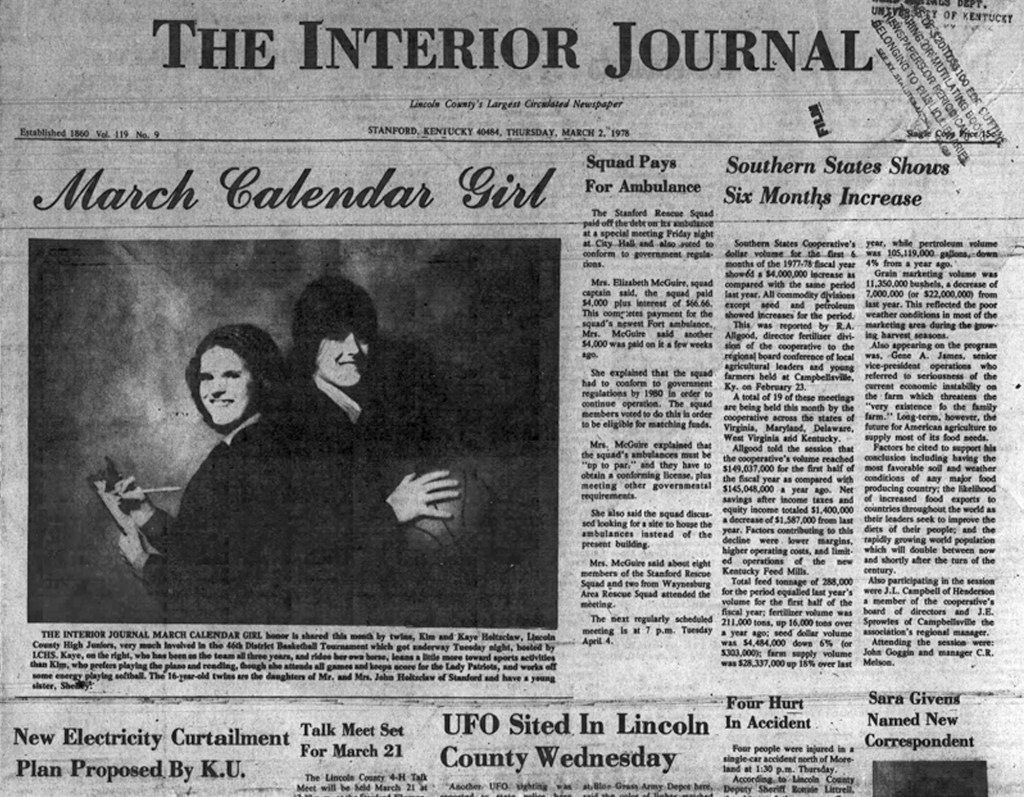 Another UFO sighting is reported to state police. According to police, Curt Folger of Stanford spotted the craft about 8 p.m. on Feb. 22, 1978, one mile from McKinney on Turnersville Road near where three Casey County women were allegedly abducted by a UFO in January 1976. The UFO was grey-colored, round with a square top and had red, white and green lights. Folger told police the object also had a window. After being contacted by police, Maj. James Wagoner of the Strategic Air Command based at the Blue Grass Army Depot instructed his crew chief to direct the radar toward the Stanford area, but they “saw nothing unusual.” 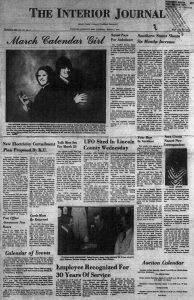 The Interior Journal announces an addition to its staff of correspondents. Sara Givens of Water Street will report the social and personal happenings of Lincoln County’s black population.

Denny Lair, Lincoln County Property Evaluator, found himself in a predicament while out grocery shopping. Lair went to IGA to buy some groceries and, when he and his wife came out of the store to head home, he found his car was stuck in reverse. So in order to get home, Lair just backed his car from the parking lot to his home on Cut-Off Street. His wife seemed to doubt the wiseness of the trip, however, because she was so ashamed that she tried to slide down in the seat and hide.

Twin sisters Kim and Kaye Holtzclaw were The Interior Journal March Calendar Girls. The Lincoln County High School juniors were both very much involved in the 46th District Basketball Tournament, which was being hosted by LCHS. Kaye, who has been on the team for three years, leans more toward sports activities and includes riding horses as one of her favorite pastimes. Kim, who attends all games and keeps score for the Lady Patriots, prefers playing the piano and reading, although she does play softball. The 16-year-old twins are the daughters of John and Betty Holtzclaw of Stanford.

McKinney High School defeats Highland 26-25 to capture the 46th District basketball crown. However, Highland comes back and sweeps the 12th Region tourney, beating Monticello 26-24 in the championship game to become the first team in Lincoln County history to earn a trip to the state tournament.

Charles Hudson of Nicholasville takes over as manager of the Lincoln Theatre from Mancel Collins.

Louis Mayes, who sold his Gulf station in Hustonville to the Montgomery brothers, buys it back a few days later.

Mr. and Mrs. J. Wesley Hocker give a dinner for widows and old maids in Hustonville.

P.I. Simpson holds a meeting of Friends of Prohibition.

A thief killed one of Monroe Smith’s hogs with an axe he found near the hog pen. The thief stole both the hog and the axe.