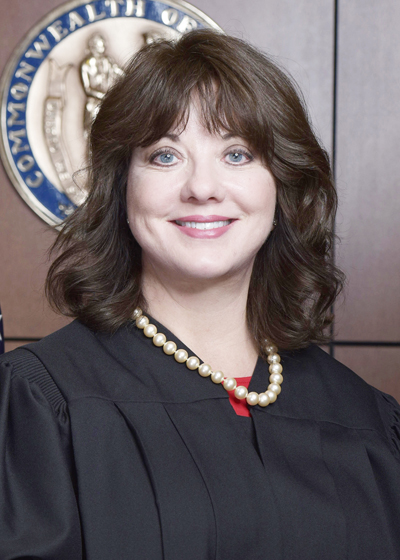 Judge Lambert was elected to the Kentucky Court of Appeals from the same district in November, 2014. A native of Bell County, Kentucky, Judge Lambert practiced law in Rockcastle County, Kentucky prior to being appointed by Governor Paul E. Patton as the first Family Court Judge in Pulaski, Lincoln and Rockcastle Counties. She was then elected and served on the Family Court bench from 1999 until 2006. Following her time as Family Court Judge, she returned to private practice until her election to the Kentucky Court of Appeals. Previously, Judge Lambert served as an Assistant Commonwealth’s Attorney and as City Attorney for the City of Mount Vernon.

As she began developing the new family court, Judge Lambert volunteered to work directly with middle schools in her three counties. Judge Lambert established a truancy prevention program called “Whatever it Takes”. This program was a strength-based program meant to encourage attendance and achievement, building on the individual student’s own skills. If elected to the Kentucky Supreme Court, Judge Lambert intends to work with educators to develop a prepackaged curriculum for the development of such a program in every county in Kentucky. “It is a wonderful opportunity for our judges to work directly with the schools and students and help prevent so many of our problems, before they get out of hand. Judges can credibly touch subjects that others aren’t able to discuss as authoritatively. I would suggest topics such as substance abuse prevention, cyber-bullying, domestic violence/school violence, suicide prevention, etc. I still hear from teachers and school administrators who loved how well this program worked.” She refers to her efforts to develop a statewide program as “Whatever It Takes 2.0”.

Judge Lambert also brought the first drug courts to her Circuit, establishing both a Family Drug Court and a Juvenile Drug Court. The National Association of Drug Court Professionals recognized Judge Lambert in 2002 by inducting her into the Stanley M. Goldstein Drug Court Hall of Fame. She is only one of three Kentuckians so honored.

“My work as a lawyer, prosecutor, trial judge, and now Court of Appeals judge makes me uniquely qualified to serve the people of the Commonwealth. I grew up modestly and learned to work hard. That work ethic has served me well in my career. The Kentucky Supreme Court gets the final say-so regarding our state laws in most all circumstances. Their rulings shape our everyday lives, both in our homes and businesses. The work is sometimes somber and often difficult, but I am a serious minded, constitutional conservative– with respect for all branches of government– and if elected, will faithfully and impartially execute my duties to the people of this Commonwealth.”

Judge Lambert graduated from Eastern Kentucky University in 1983, with distinction, and from the University of Kentucky College of Law in 1989, in the top 25% of her graduating class. She is married to Joe Sharpe and the mother of two adult sons, Joseph Patrick Lambert and John Ryan Lambert. She also has two step-daughters, Jessica Sharpe (Nick) Stringer, who are the parents of grandson, Sam Stringer; and Chelsea Sharpe and fiancé Evan Woolums. Debra and her husband live in Burnside, (Pulaski) Kentucky.