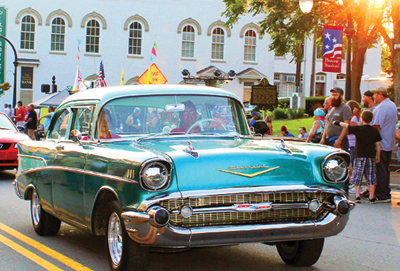 File photo by Abigail Whitehouse A classic car makes its way down Main Street in Stanford.

STANFORD — Despite his attempts, Stanford Mayor Eddie Carter said he has not been able to find any local groups interested in taking over leadership of the downtown cruise-in car show.

Due to the lack of interest, Carter told city council members last week that the car show might have to be canceled.

Carter said he attempted to oversee the car shows, which are held on the third Friday of every month from May through October, but it required a large amount of work.

“I hoped I could get enough civic clubs and churches to take it every month and sell the food and make a little money, and be there and take the entries,” Carter said. “It was a nightmare for me. It was a lot of work.”

Despite his efforts, Carter said no one has expressed any interest in taking over the responsibilities.

“Unless we can come up with somebody — I’ve called several people that would maybe want to be over it and take it and be responsible for doing the entries, blocking the streets, getting the restrooms open…” he said.

The responsibility is voluntary but local civic groups have an opportunity to make money by selling food or other concessions, Carter said.

“They can buy the food, set a food booth up and then try to make some money on popcorn or whatever, hotdogs and hamburgers,” he said. “But they’ve got to be there to take the entries, block the streets off, take care of the restrooms and open for them. It’s right smart work in a way but if four or five people are doing it, it’s not so bad.”

The city pays $1,500 annually to furnish a deejay for each of the six car shows.

Carter said donations have been made in the past but monetary support has dwindled.

“Last year, we didn’t have anybody donate, I don’t think,” Carter said.

Groups such as First Priority and the local Habitat for Humanity have volunteered to manage car shows before, Carter said.

“I really called around pretty good,” he said. “People are so busy and, I don’t know, maybe car shows are not hardly as popular as they once was.”

City Council members agreed to spread the word and see if any new interest is expressed in the next month.

“Let’s put a deadline on it,” said Councilman Naren James. “Let’s advertise it over the next month and make a decision at next meeting whether we proceed with the deejay.”

Any individuals or groups seeking more information on the car shows can contact Stanford Mayor Eddie Carter at (606) 365-4500.