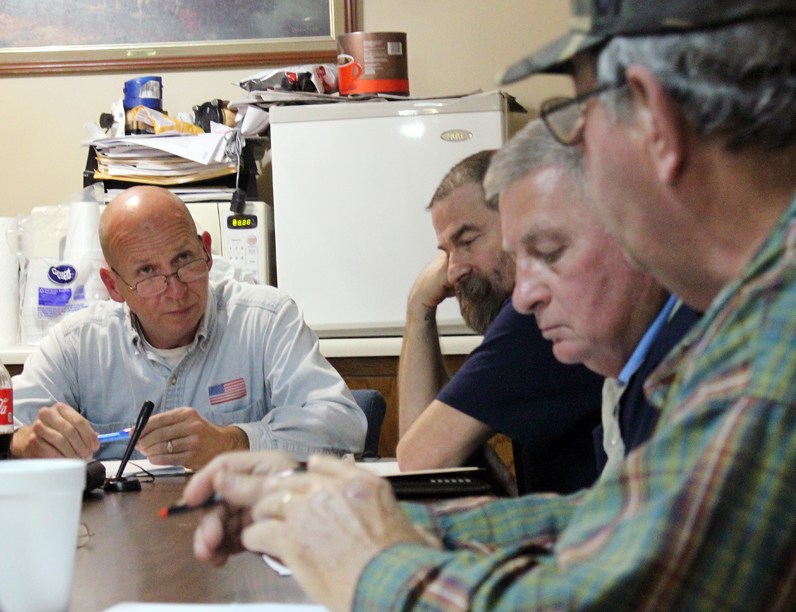 HUSTONVILLE — After four city council members were seen gathered outside of city hall and heard discussing public business, a complaint was filed by The Interior Journal alleging the gathering violated the state’s Open Meetings Act.

The complaint, which was filed on Oct. 17, detailed what the newspaper called an “in-person meeting of members in a quorum without notice to the public” that took place on Oct. 3, following the regular city council meeting.

“The Interior Journal editor overheard councilman Spivey discussing the city’s recent replacement of missing or faded street signs as well as a new three-person committee voted into place by the council that night. These topics were on the Oct. 3 public meeting agenda and were discussed during the public meeting. The council members remained there, talking for at least 20 minutes following the meeting and were still outside talking when the editor left the premise,” the complaint states.

Mayor David Peyton was not present during the regular Oct. 3 meeting due to illness but expressed his concern with potential open meetings violations saying, “Back at the table, that’s where we conduct city business, not outside, not at somebody’s house.”

The newspaper filed an appeal with Kentucky Attorney General Andy Beshear Nov. 7 after the City of Hustonville failed to provide a written response to the complaint within three days, which is also a provision of the state’s Open Meetings Act.

A decision handed down by the Attorney General’s office Nov. 27 deemed the newspaper’s open meetings appeal moot, stating the City of Hustonville acknowledged its error and complied with the requested remedy.

According to the attorney general, a response to the appeal written by City Attorney Jonathan Baker on Nov. 15 mooted the issue.

In the letter, Baker states that the open meetings complaint was received and the remedy proposed by the newspaper — to distribute copies of “Your Duty Under the Law” to each council member to read — was fulfilled during the city’s November meeting.

“I am requesting this court close the appeal of Ms. Whitehouse due to the fact that the relief she requested had been undertaken,” Baker writes. “It was a clerical error and oversight that the written communication was not forwarded to Ms. Whitehouse.”

Upon receiving Baker’s letter, the attorney general ruled that the City of Hustonville “mooted the issue on apeal by acknowledging its error and complying with the requested remedy.”

The Nov. 27 open meetings decision cites KRS 61.846 (1) which states, “When a public agency concedes the open meetings error alleged, the issue upon which the appeal is based becomes academic or moot.”