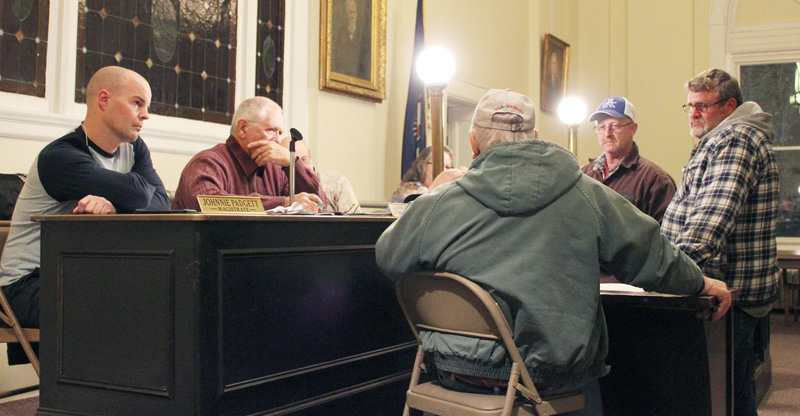 “Lincoln County EMS is created. We assumed taking over run volume in Waynesburg this past Wednesday morning (Nov. 15), we’re just waiting for the lease agreement with East End to be signed before we transition into East End,” said Lincoln County EMS Director Ashley Powell during the Nov. 20 meeting.

Powell said the Lincoln County EMS Board of Directors is only lacking a Waynesburg and East End representative to complete the representation across the county.

“The agreements have been signed to do the merger, the consolidation agreement were all signed by all parties. It’s a matter of logistics and taking over operations in that area. We did that with Waynesburg…we’re waiting on the lease agreement to be signed with East End so that Lincoln County EMS has a housing unit and a station to go to in the eastern part of the county,” Powell said.

Board member Billy Phillips made a motion to cancel the ambulance board’s contract with Waynesburg Area Rescue Squad, with plans to do the same with East End EMS when they’ve signed the final lease agreement. The motion passed.

The ambulance board previously voted to release funding to the consolidated service once the final contract is signed but board members questioned the vote since the lease agreement still awaits a signature.

“That is correct,” Powell said.

“So we’ve got that entity,” Floro said. “The only thing left for the new entity to do right now is to negotiate a lease agreement, which is secondary to the creation of the contract…And then the second issue is for Waynesburg to designate a board member. The Lincoln County EMS service right now is a formal entity and has the authority to executed this contract and as you’ve already indicated, it has executed this contract.”

Phillips made a motion to disburse $118,400 to Lincoln County EMS, which was previously agreed to once the contract was signed. The motion passed.

Waynesburg Area Rescue Squad presented a proposal to the ambulance board requesting funds to replace an ambulance engine.

“The ambulance that they (Waynesburg) decided to keep since the consolidation, the engine blew on it,” said Board Member Keith Lemons. “They’re asking for, according to the request, $44,000.”

Lemons said Waynesburg would like to start the consolidation off with a clean slate but currently owes the bank $24,000. They would also like to replace the engine so they can make transport-runs, which is expected to cost around $19,000.

“They’re going to get enough volunteers to have a volunteer service to do these transport runs for dialysis, nursing homes, etcetera and that’s what they’re asking for tonight,” Lemons said.

Jeff Ruckel, of Waynesburg, said in order to keep the service’s Certificate of Need (CON) it will cost more and the service has already been running on borrowed money for the last six months.

“It costs us $23,000 for the insurance to run to keep our Certificate of Need. If we give that up, we’ll never get it again, they don’t give anymore out,” Ruckel said.

Lemons said he’d like to see the board start the services out on even ground.

To maintain a Certificate of Need you have to have a working ambulance stocked and personnel, according to East End EMS Director Larry Owsley. A mutual aid agreement can cover the personnel if needed, he added.

Powell said in initial discussions, the intent was to let the services keep their CONs to make sure everyone was comfortable with the county system and could survive.

“The other intent we discussed was that these services would have some community members that live in their areas for doctors appointments to request those services (transports),” Powell said.

Board Member William Stafford said trying to keep the services’ Certificate of Needs alive is counterproductive to the purpose of consolidating services.

“We had discussed whether the existing organizations that were maintaining their Certificates of Need would be in competition with the new ambulance service, we had discussed that originally,” Floro said. “And the answer was no, they wouldn’t be in competition. I can’t find that liability here on your statement of assets and liabilities.”

Floro asked what the current receivables for Waynesburg are right now.

Billing companies can give a percentage based on history of collections, Floro said, as well as the amount of money that has currently been billed but not received.

“We can probably get that now since we know the date they can check to but it’s not going to be that kind of money,” said David Williams, of Waynesburg.

“To mirror what Jerry (Shelton) said, I would love to get you guys out of trouble but I would certainly like to know how we are spending taxpayer money when we do that and knowing how much money that Waynesburg has coming in, I think is important,” Floro said.

The board voted to disburse $24,000 to Waynesburg Area Rescue Squad.

As far as the engine repair, board members Floro and Phillips both expressed concern with disbursing more funds without knowing how much money Waynesburg is expecting to receive.

“We have already spent $75,000 of taxpayer money to relieve Waynesburg’s debt and we still don’t know how much money you’ve got out there to collect,” Floro said.

Ruckel said they would bring an estimate of receivables to the next board meeting.

• In other business, the board voted to meet at 6 p.m. December 18 (the board normally does not meet in December) to ensure the completion of consolidation.

Phillips voted against the motion.