Veterans young and old have a bond, but very different experiences 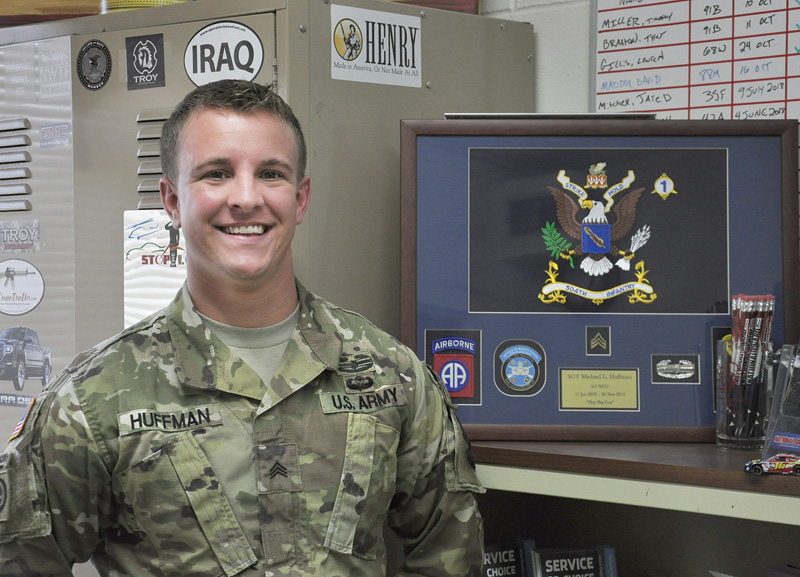 (Robin Hart/rhart@amnews.com) Sgt. Michael Huffman stands in his office, inside the National Guard Armory on Stanford Road in Danville. 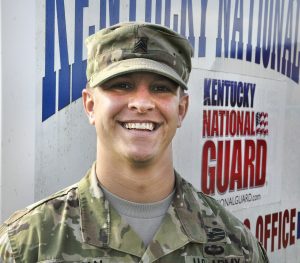 In celebration of Veterans Day, generations of veterans will be treated to free meals and invited to ceremonies. They may join hundreds of others sharing stories of their military adventures. Or, they may sit quietly at home contemplating their life while serving our country.

And whether they are 17 or 97, and any age in between, veterans have a strong bond.

Sgt. Michael Huffman, 27, of Stanford who served a tour in Iraq and one in Afghanistan and now works as a recruiter at the Army National Guard in Danville, said that’s the part that he enjoys most.

“I like being a part of the few. Just walking out in the uniform and having people thanking you for your service, but they don’t even know where you’ve been. That’s the kind of stuff I enjoy.”

Huffman said he joined the Army at 17, and right after graduating from Lincoln County High School in 2009, he completed basic training and was on active duty until 2013 with the 82nd Airborne Division out of Ft. Bragg, North Carolina.

While on active duty, Huffman spent seven months in Iraq. He said Iraq was really built up and was more like being in a town.

“We had McDonald’s over there. We had Starbucks over there.” They even had use of a three-story gym. “It was almost like a vacation over there.”

He said he was in one of the last groups from the 82nd Division in Iraq. Their mission was to pull troops and equipment out of the country and send them back to the United States.

Afghanistan was a completely different experience.

Also, their mission wasn’t very clear. Huffman said they were setting up communication systems, but, “I really don’t know what our intentions were, unfortunately.”

He said he was nervous, especially during the first month. Every time a bomb targeted them, Huffman said sirens alarmed and the soldiers had about 3 to 5 seconds to get into the bunker. “We did lose one guy,” Huffman said, when the bomb exploded in the workout tent.

Huffman said after comparing experiences with older vets, he found out, “It’s not even remotely the same.” But, he explained, the veterans from World War II, Korean War and Vietnam War and even veterans from the more recent Iraq and Afghanistan conflicts, all have something in common. For all veterans, “It’s something you can bond about,” Huffman said.

“The war we’re fighting now, it’s not one where you stand and fight each other face to face, like they did in the old wars.”

Soldiers today deal with car side bombs and IEDs (improvised explosive devices) on the side of the road, Huffman said. “Our war is nothing like back in the day. I can’t even imagine what it would have been like.”

Huffman said he also thinks when today’s soldiers return from fighting they now have an advantage. When getting off of active duty, Huffman said soldiers have an entire month to “get back into the civilian mindset.”

You see the chaplain and a primary physician and answer a checklist of questions, “so he can evaluate where you are and make sure you come back, not only physically, but mentally too,” he said.

“A lot of the older vets, they don’t like talking about it. That’s definitely one of the big differences. Now when you come back from overseas, you have to sit with a primary care physician and talk about what you did overseas.

“The problem is that people don’t want to talk about what they’ve seen and what they’ve heard. And unfortunately this has long-term effects, if you don’t talk about it and get it out of your system.”

He added, “A lot of your older vets didn’t come back and talk to people. They didn’t express the stuff that happens. You know most of our veterans still won’t even tell you the stuff that they did — to this day. You got to try and dig it out of them. It would help, really.”

“I have the upmost respect for anybody who has ever served in the military. It’s a huge decision to make, to raise your right hand and do something bigger than yourself, something you have no control over,” Huffman said. “For the older vets, I definitely respect them. I’ll be the first one to shake their hands because I know they’ve had it a lot harder than any of us have had it. I shake the kids’ hands that I put in the very first day too, because you don’t know what you’re signing up for. You might sign up for free college (with the National Guard), but you know everything comes with a price.

“I respect all veterans, past, present and future.”

Huffman said he and his high school sweetheart broke up when he left for the Army. But after serving four years and two deployments, Huffman started talking to his former girlfriend and they got back together.

“I was ready to get out and settle down and have a family life.”

After returning to Lincoln County, Huffman worked for three years at Berry Plastics.

“But something was missing. I got married, had a house, had a kid, had everything you could want, but I missed the honor of having a uniform on and the respect that came with it.”

“I can’t see myself doing anything else.”

Huffman has been married for two years, has a 1-year old daughter and a second daughter on the way, something which brought a grin to his face to say.

He said he would absolutely encourage his girls to join the military, even though his wife Shannon may disagree.

“I think the stuff you get in the military is something you can’t get anywhere else.”

Huffman also said he also hopes his young daughters will be just as happy playing dress-up in fatigues as they may be in “princess dresses.”