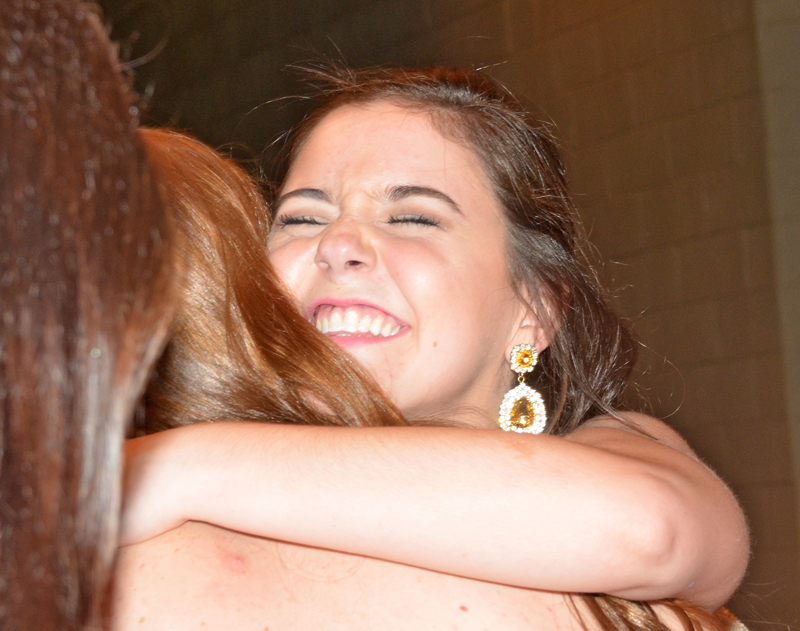 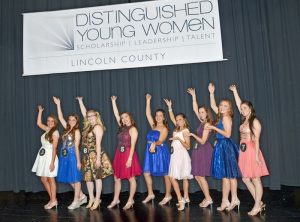 STANFORD — It started with friends telling her about the rewarding experience of participating in the local scholarship program. Now, Madelyn Day will spend a year as the 2018 Lincoln County Distinguished Young Woman and take $6,625 in scholarship money with her to the University of Kentucky next fall.

“It’s not even about the winning. I’ve grown up watching the program and I’ve seen so many other people win, and they’ve told me about the friendships they’ve made and the experiences they’ve had. That’s really what I was in if for,” Day said. “Of course, winning was awesome, too.”

Day, who was a model of poise and grace throughout the competition, was a little shaky as she stepped to centerstage at Stuart Underwood Auditorium Saturday evening to accept the DYW title, being chosen out of a field of nine candidates.

“Of course, I was hoping to win. That’s what every girl hopes,” Day said. “I still was just a little shocked.” 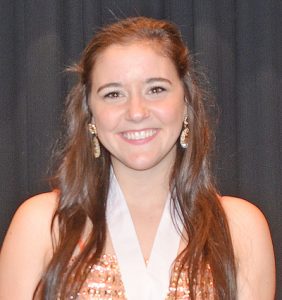 And Day, the 17-year-old daughter of Daryl and Dawn Day of Stanford, didn’t just win. The Lincoln County High School senior swept all the preliminary categories – scholastic achievement, interview, talent, self expression and fitness – to earn the title.

Day said her preliminary wins and the announcement of each runner-up made her well aware of her situation.

“Winning all of the preliminaries was truly a blessing. And once I saw that I figured I won,” she admitted shyly. “I was hoping inside of me. But I was also going to be totally okay if anyone else had won because they are all amazing girls.”

Along with the DYW title, Day received a $4,200 cash scholarship and the right to represent Lincoln County at the 2018 Kentucky Distinguished Young Woman program in Lexington in January.

Day’s talent was a tap dance to “Santa Claus Is Coming To Town” and she wore a coral dress with a sequined bodice for the self expression portion of the competition. Her biggest cash scholarship in the preliminaries came in scholastic achievement as she was named the overall winner. For that award, she won $1,000.

While Day is familiar with performing before crowds as a member of Champions Elite All-Star Dance and Diana Evans School of Dance, she said she had a case of the butterflies Saturday.

“I was nervous about all of it!” she stated. “Interview was really a big part that I was worried about, but I just went in and was calm and did my best.”Day said getting the interview over in the afternoon made Saturday evening run much smoother,  except for ….

Will the nerves Day felt going into Saturday’s program reemerge when she takes the stage for state in January?

“I know it is still going to be nerve-wracking, but past winners have told me that state is really just having fun and meeting girls from other counties, so I’m ecited to go and do that and it won’t be as nerve-wracking,” she said.

The Distinguished Young Women program, previously Junior Miss, is a competition for female high school seniors that is much like a pageant, although there are no crowns or sashes, no “Miss” titles and no swimsuit competition. Half of each contestant’s score is based on their scholastic accomplishments and a private interview with judges. On stage, contestants perform a talent of their choice and a physical fitness routine and compete in a phase of competition called “self expression,” in which the contestants wear knee-length semi-formal dresses and answer a question.

Emma Kaiser, the daughter of Andrew and Jennifer Kaiser, was named the first runner-up and was also a winner in the talent and interview preliminaries and a runner-up in scholastic achievement. She received a $3,200 cash scholarship as first runner-up, $450 scholarships for interview and scholastic achievement and $375 for talent. For her talent, Kaiser presented her own poem, “How Will You Shine Your Light,” while spray painting a picture on canvas.

The second runner-up was Katelyn McWhorter, the daughter of Jeff and Jennie McWhorter. She also won in three preliminaries – talent, self expression and fitness. In her talent presentation, McWhorter sang and danced to “You Can’t Stop the Beat” from the musical “Hairspray.” She was awarded $2,200 as second runner-up, $375 for her talent win and $300 in both self expression and fitness.

Cassidy Goetz, the daughter of Kevin and Angie Goetz, captured the third runner-up spot and received $1,200. Goetz was a multiple preliminary winner, claiming a $450 cash scholarship in interview and $300 in self expression with an additional $500 as scholastic achievement first runner-up.

Hailey Brogle, the daughter of Thomas and Jennifer Brogle, had winning performances in talent and fitness, was a runner-up in scholastic achievement and was a co-winner for the Phyllis Cooley Memorial Spirit Award and Jennifer Baker “Be Your Best Self” Memorial Award. For those honors, Brogle received $1,725 in cash scholarships.

For her talent, Brogle did an en pointe ballet routine to “Phantom of the Opera Medley.”

Alyssa McQueen earned a $450 scholarship in the interview preliminary and $300 as a co-winner of the Spirit Award. McQueen is the daughter of Lisa and Doug McQueen.

Hayley Jones, the daughter of Amy Michelle Blacbeter and Kipp C. Jones, captured two awards totalling $600. She was a self expression winner and a co-winner of the “Be Your Best Self” Memorial Award.

Alexandria House, the daughter of Ruby and Curt House, was awarded a $300 cash scholarship for a fitness preliminary win.

Kira S. Lewis, the daughter of Kathy Gastineau and Paul Lewis, rounded out the list of DYW candidates.