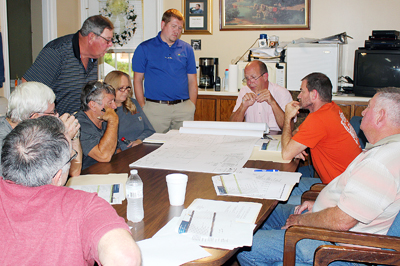 HUSTONVILLE – With project bids coming in above the city’s total budget, council members have been scaling back plans for a new fire and emergency services building.

Josh Shuster, of the architectural and engineering firm Brandstetter Carroll, presented a set of plans to the council during the Sept. 5 meeting in Hustonville and discussed various alternatives to the plans that could help cut the cost.

Shuster and council members discussed areas in which square-footage could be lost to save money, including the front canopy area and the office area.

“Any reduction of square footage is obviously going to save,” Shuster said. “We have looked at reducing the windows, that was on the list. We didn’t have a lot to begin with but we cut some of those out.”

Architects also evaluated light fixtures and piping alternatives that could also cut some of the cost. Certain aspects of the building project, such as the grading and gravel work for parking outside the building,

“We can take this list into account, mock up a couple floor plans and see if it works still with your all’s program, at least to get you going and still leave you room for the future to create a couple fire offices maybe later,” Shuster said.

Shuster said he expects four or five of the previous project bidders to return for the second round of bids, in addition to new ones.

As of the Sept. 5 meeting, the changes and reductions made to the building plans had reduced the cost down to about $914,300 – still more than what the city has budgeted.

“I mean I think you’re still about $150,000 away probably,” Shuster said. “I don’t think that square-footage reduction will get it all the way there.”

After paying some engineer fees already, Peyton said the city has $813,000 left in the project budget.

Councilman Jimmy Evans expressed his concern with spending more on the project.

“One thing we have to consider as the city council and the mayor is that, like last month, we had $28,000 and some-odd dollars in the bank and we don’t have a lot of extra money. And we don’t want to raise the water rates to finance this project,” he said.

Peyton said large amounts of money were expended this year on the water project, which won’t be a regular, annual cost.

“It’s not going to take us that long to build back up the reserve fund because we’re not going to see $85,000 going out at one time like we did two months ago,” Peyton said.

“We don’t have a contingency built in this project so if we find some unsuitable soils while we’re digging this footer, it’s going to cost some money – not a ton, but there are extra costs in that,” he said.

Soil tests were conducted but the potential is always there, he added.

Evans suggested Shuster return with plans that reflect the square-footage reductions and other changes suggested by the council.

“We have this half-a-million dollars of this free money and we’re wanting to see this done,” Evans said.

Peyton asked Councilman Jimmy Lane, who also serves on the Lincoln County Ambulance Board, if the ambulance board would be willing or able to pitch in on the project. Lincoln County EMS will eventually house the emergency services portion of the city’s new building.

Lane said the board is currently awaiting the completion of consolidation before disbursing any funds to the services.

“I know they were severely underfunded and since they have got their tax increase and revenues coming in for EMS service, just asking the possibility if any funds would be available,” Peyton said. “Every little bit helps. It’s a good faith gesture, as much as anything. I understand they’re budget-constrained, as we are.”

Councilman Marc Spivey asked Shuster if there were any other unexpected costs the city should be prepared for as the re-bidding process begins.

Shuster said special inspections required by law will cost around $3 to $4,000. Evans asked Peyton where the city could come up with more money to make up the difference.

“One option we do have is to borrow some money from First Southern (National Bank) against the CD (certificate of deposit) that they’re holding,” Peyton said. “That’s the cleanest. It’s hard for a city to borrow money from a local bank. They cannot put a lien on city property so they don’t have any collateral.”

Peyton also said the fire department can hold fundraisers at the new fire and EMS building – something they haven’t been able to do without a suitable fire station.

“You can’t hardly serve people food in the station next door,” Peyton said. “In a sense, we’re kind of counting on community support, not only from city residents but from residents of the west side of the county.”