Geography a passion for Moreland 4-year-old 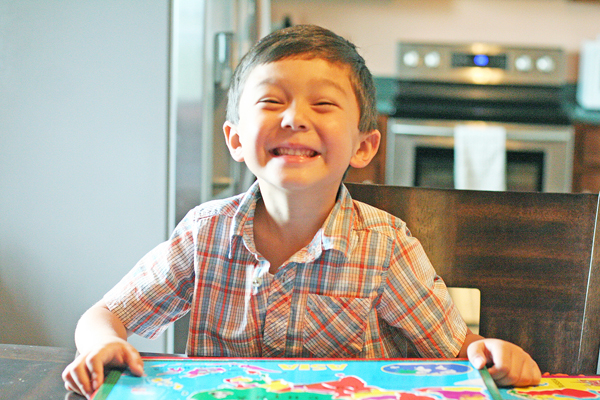 If you hang out with 4-year-old Joshua Hicks, you might learn a few things.

“Here’s Argentina, Chile, Bolivia, Paraguay, Uruguay, Brazil, Guyana,” he said while seated at the kitchen table in his parents’ Moreland home, pointing to each country on his map of South America.

He falters a little on Suriname, but with a little help from his dad Anthony, the youngster tackles it and moves on.

In all, dad said, Joshua knows the names of more than 100 countries, where they are located on a map and their capitals. There are 195 in the world, or 196 if you consider Taiwan a country (some do not).

“He gets excited when you talk capitals,” Anthony said.

He’s not as strong with the countries on the continent of Africa.

It’s not long before he turns it around.

Joshua’s interest in geography began last year, when his mom Elizabeth gave him a puzzle with a map of the United States.

“He started doing that, so I started teaching him all the capitals,” Anthony Hicks said.

It wasn’t long before Joshua had mastered all 50 states. Michigan is his favorite because “it’s got all the lakes in it,” he said, referring to the Great Lakes.

He knows them all, of course.

After U.S. states, they moved on to the world. He now works a world map with 100 pieces in it in a little over five minutes — it’s not from memory; it’s from trying pieces to see what fits. Elizabeth said they are trying to find him a bigger puzzle, perhaps one with 150 or 200 pieces.

“He doesn’t like them all,” she said, explaining that not just any puzzle will interest him — only those with geography, space or something similar.

Joshua can’t yet read — Elizabeth said its easy to forget that — but he knows what the countries look like and where they are located. He also has puzzles for each continent.

“I’ll try to teach him one or two a day when he does his puzzles,” Anthony said. “He picks it up pretty quick.”

Joshua’s favorite continent is Asia, because it’s home to the biggest country, Russia — also his favorite.

He likes big things. That’s the same reason his favorite planet is Jupiter.

Joshua actually started with the planets. He has outer-space-themed puzzles and an electronic toy that shows how each planet rotates around the sun. He knows Jupiter is made of gas, Saturn has rings, Neptune is an icy planet. And he knows that Pluto is “a dwarf planet.”

Joshua has also learned the longest rivers in the world and which continent each is on; all of the continents; and the five oceans.

His newest interest, his dad said, is flags of the world.

Anthony said he always liked geography when he was younger — but older than four — and is now getting to relearn a lot thanks to Joshua.

Despite all of that knowledge bouncing around, Joshua is a fairly normal kid. While at the table, he lets his imagination take over and moves Antartica off the puzzle and onto the “water” — a pane of glass in the center of the table. The rest of the table, he explained, was the land and Antarctica floats, so it needs to be in the water.

He likes cartoons — Spongebob, for one — and to color, draw and to make “treasure maps” for his parents. He likes YouTube videos as well — his favorites include, of course, a song about the states and their capitals.