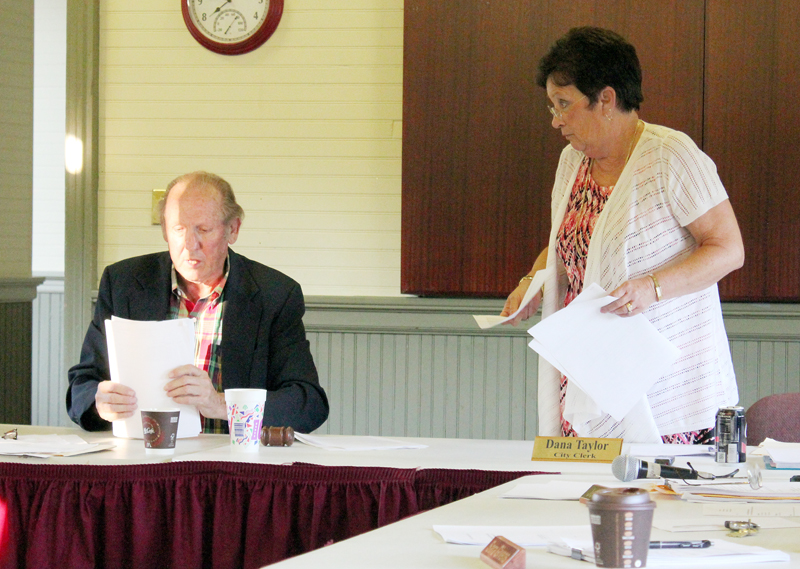 STANFORD – A discussion about a resident viewing public records at city hall turned into a heated exchange last Thursday between the mayor and city clerk.

“I did not like the implication that you stated this morning when you stated there was something improper between me and Mr. (James) Jarrett,” City Clerk Dana Taylor said. “People have been talking.”

On July 25, Jarrett requested to review all of the city’s meeting minutes currently available “as far back as the records go in city hall.”

Taylor said she didn’t appreciate an accusation made by the mayor regarding the incident.

“That’s what we were doing Mayor Carter,” Taylor said. “I really resent that because you set the implication that he and I were doing something improper.”

“I said it didn’t look good,” Carter said. “I’m just saying, it needs to be at a separate table, Dana.”

Taylor said Carter suggested sending Jarrett to another room at city hall rather than allowing him to view the records in the main office area.

“I’m not there because something looks good. I’m there because of what the law says,” Taylor said. “You suggested that he go back in one of the back rooms. The reason I did not do that was because I am the keeper of those records. I have to keep my eye on him. You cannot send them back in another room with the records. What if he walks out with those?”

Carter said he understands and thinks a separate table in the same room could be set up.

“I just want it to be a table over by itself in that same room,” he said. “That’s what I want and that’s what we’re going to do.”

One person in attendance asked why Carter cared if Taylor was near Jarrett while he reviewed the records.

Carter said the viewing of public records should be separate from the main city office area.

“This office is to do city business, if she’s busy on the phone or whatever, it needs to be separated from the main desk, ma’am,” he said. “I didn’t make an implication. I just said…me as mayor, I’m her boss, and I want a table over to the side. In my position, I have that right ma’am, to request that. Anyone who wants to see open records, we’re going to give them to them. But I have the authority to have it sit over to the side away from where she’s doing business at her main desk.”

Jarrett said he was viewing the records at a smaller table and she was at her desk.

“At one time you were sitting right next to her,” Carter said.

“That is not true,” Jarrett said.

Carter said from now on, records can be viewed at a separate table at city hall.

“That’s fine, I tell you what, if I want to look at them we’ll do it in your office,” Jarrett said. “I just want to have access to the records.”

Carter said Jarrett has every right to view public records.

“I was not beside her. This has to stop. This foolishness has to stop today,” Jarrett said.

Councilwoman Sara Givens intervened and asked Carter and Jarrett to calm down.

“Clam down. We don’t want a screaming match up in here. Every body just calm down,” Givens said. “Let’s just calm down and do this right and do it in decency and in order…”