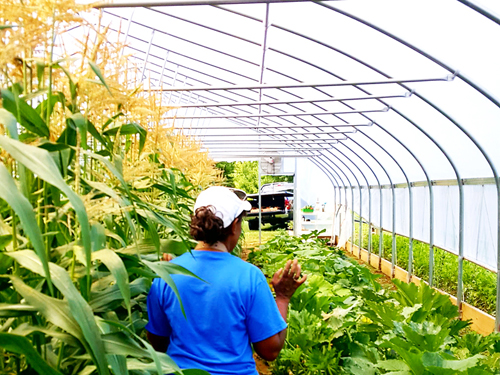 Photo by Abigail Whitehouse Susan Miller walks down a row in a new high tunnel greenhouse that sits on her family farm in Lincoln County.

STANFORD – It was 20 years ago when Susan Miller and her family moved to Lincoln County and, at her father’s urging, started growing and selling local produce. Since then, Susan has embraced her role as a fifth generation farmer and expanded her family’s Lincoln County operation – putting to use the tricks and techniques passed down by her father.

Out of her five brothers and sisters, Miller said it was her and her younger brother who took interest in the family’s  trade. As children, she and her siblings did their fair share of work on the farm and despite her love for growing produce today, Susan said she wasn’t always such a big fan.

“My daddy grew cucumbers, he grew cabbage, peppers and things like that, and we hated every second of it,” Miller said laughing as she made her way down a long row of tomatoes. 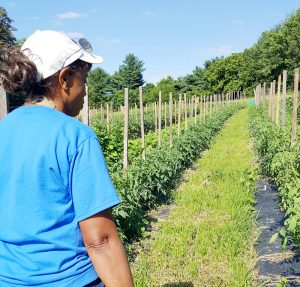 Photo by Abigail Whitehouse
Susan Miller walks between the rows on her farm in Lincoln County.

As an adult, Miller said it wasn’t long after she and her husband George started growing that the couple was hooked.

“My dad (Ray) had a green thumb,” Miller said. “He really enjoyed it.”

Much like her childhood experience, Susan – who also holds a full-time, Family Resource Center position at Stanford Elementary – said the Lincoln County farm is a family affair that relies on teamwork.

“We’ve gotten to the point where we could hire an employee but I just love it out here by myself,” she said. “I try not to put out more than I can handle. My husband and I do all the work and my daughters are responsible for the cherry tomatoes, and they’ll come out and pick the cucumbers and other things. I have a little nephew who just loves doing things.”

Photo by Abigail Whitehouse
Miller weeds a row of tomatoes on her farm in Lincoln County.

Miller said she has cultivated a strong relationship with the Lincoln County Extension Office over time and relies on the office for soil testing and advice when it comes to diagnosing produce problems or trying out new growing techniques.

The Miller’s four-acre farm, situated on Hwy. 78 just outside of Stanford, grows a variety of produce from beans, potatoes, corn, tomatoes and cucumbers, to squash, peppers, onions, cabbage, cantaloupe, watermelon and more.

In 2014, Susan and George – both children of farming families – were presented with the Small/Limited Resource Producer of the Year award at Kentucky State University’s Small Farm Conference.

Most recently, the Millers added a new, high tunnel greenhouse to their operation which continues to build upon their ability to grow more produce and reach more local consumers. 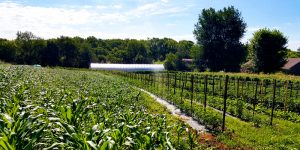 Photo by Abigail Whitehouse
A four-acre farm in Lincoln County is using a high tunnel technique to extend the growing season for their produce.

The benefits of growing produce in a high tunnel – also known as “hoop houses” – continue to increase the popularity of the technique, as farmers see an opportunity to extend their growing season, improve produce and soil quality and reduce energy and pesticide use.

Those are just some of the benefits that Miller has discovered in her first year growing in the high tunnel, she said.

“This is my first year and I was told that more than likely this high tunnel probably would not produce a lot of things (and to) just do it for the fun of it the first year and learn it, but it has done better than I ever dreamed,” Miller said. “I’m totally blown away because it’s done so well. I’ve had so many people tell me not to go overboard the first year because you’ll have a lot of failure.”

That hasn’t been the case for her, though, she said. 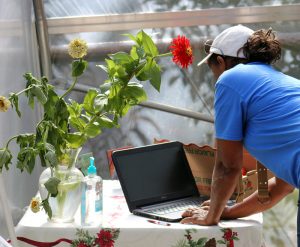 Photo by Abigail Whitehouse
Susan Miller, local farmer, looks at her spreadsheet that tracks the progress of her produce and keeps her organized.

In the corner of the high tunnel, Miller has a small desk and computer set up so she can track her planting seasons and progress.

“I have a spreadsheet that I do and I know when this is going out, when I need to plant more and things like that. I try to keep up with how many weeks things last so I know when to start things in the pods,” she said.

Bees are welcome guests in the high tunnel, Miller said, and consumers are particularly fond of the fact that no pesticides are used on the produce.

“I think one of the reasons why, because you’ll see bees galore in here, is that I don’t do a lot of pesticides,” Miller said. “We don’t fight with the bees, we just let them. We want the bees to come in.”

As she continues to navigate the first year in the high tunnel, Miller said she already has ideas she’d like to implement in the future to make the operation even more sustainable.

Next year, Miller said she wants to put gutters on the sides of the high tunnel to collect and recycle rain water. Currently, Miller uses timed drip irrigation under the plastic to water the rows at set times.

“I notice when it rains, I’m losing so much water. To a farmer, water is precious. I think I’m going to do tanks and let the water rotate back in here,” she said.

The beauty of selling produce locally is the ability to adapt to the consumer, Miller added.

Somewhat similar to meal kits of local food sold and delivered by companies like Blue Apron, Miller also puts together variety packages of her fresh produce. The “Nutrition Boxes” which sell for about $14 – more if delivery is required – can include a variety of produce items tailored to the local consumers’ taste.

If there’s a particular produce item that a customer would rather exclude, Miller said she can switch it out for something else in her garden. One of Miller’s recent nutrition boxes, for example, included tomatoes, beans, peppers, squash, new potatoes, cabbage and cucumbers.

The pre-packaged produce boxes have quickly grown in popularity since she started offering them, Miller said, which is why she has to limit the availability to what she can manage.

“It’s going like hot cakes,” she said. “I think the nutrition box is going to be really, really popular. People are eating healthier.” Miller said she would like to be able to provide nutrition boxes all the time but, for now, they are only sold on a selective basis.

When they aren’t selling produce at the local farmer’s market or Crab Orchard Produce Auction, the Millers can typically be found selling from their  road-side stand at home on Hwy. 78.

The Lincoln County Farmers Market is open now Monday, Wednesday, Friday and Saturday each week from 8 a.m. to 3 p.m. each day or until sold out. The market is located on US 150 at the First Southern Veteran’s Park Ag Credit Pavilion near the entrance. For market information call (606) 669-3374. 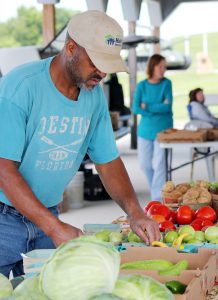