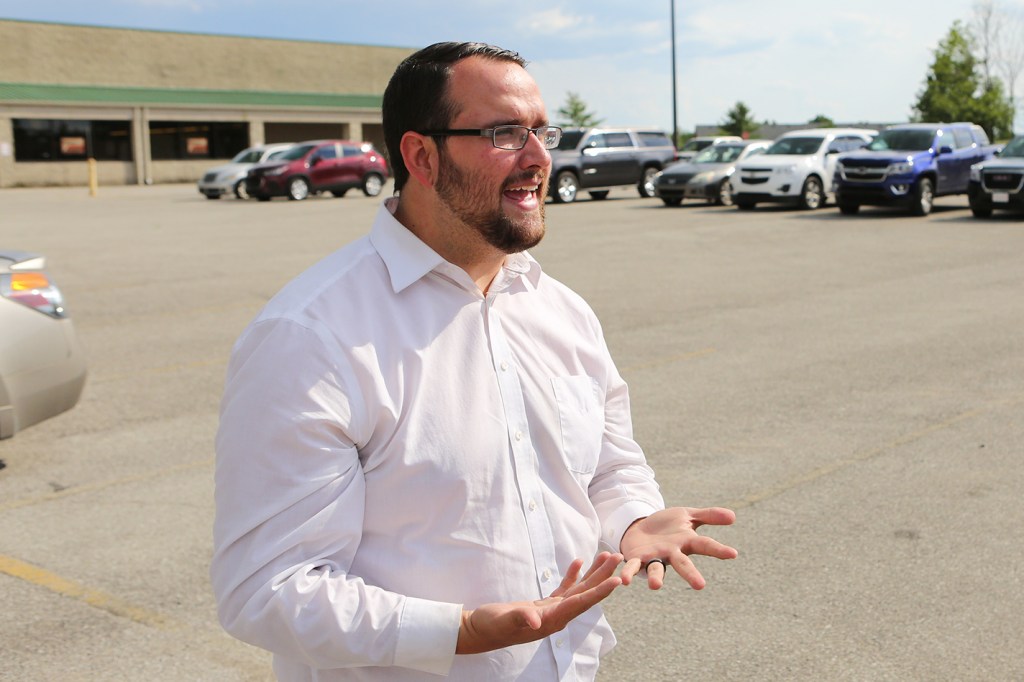 Andrew McGinnis of Hustonville speaks Tuesday at a rally in support of the proposed nickel tax. Photo by Joshua Qualls

STANFORD — Following the Lincoln County Board of Education’s rejection of the proposed nickel tax at its June 8 meeting, 20 locals met Tuesday afternoon in the old Food Lion’s parking lot to call for more discussion on the levy and the $21 million of bonding potential it could bring to the school system.

Had the levy passed it would have made $7.2 million in bonding potential available immediately to Lincoln County Public Schools – nearly a quarter of the district’s $30 million in debt from previous bonds. The first vote would only have created a tax rate of 5.9 cents per $100 valuation of real and personal property, and how to spend the money would have been decided in a later vote.

“The people that are here today represent, I think, a small portion of the people that support the nickel coming to Lincoln County,” said Zonda Byrd, a special education teacher who works at several schools in the district. “I hope that our board will reconsider and this will spark more discussion about the Lincoln County nickel tax.”

The seven who spoke at the rally shared similar concerns, suggesting that the board did not act in the interest of students and had failed to see the big picture — that a June 8 vote to approve the recallable nickel tax would have had no bearing on how the money would actually have been spent.

As board member Theresa Long told The Interior Journal last week, a lot of skepticism about the nickel tax revolves around the way the money would be spent. One of her concerns in particular was the school system’s debt.

McKinney Elementary teacher Justin Padgett, who works in Long’s district, said he would like to see debt paid off too, but the money could be used for much-needed renovations or new construction. “I think it’s time for Lincoln County to take that step in that right direction, to build some new property and get our kids in some better-functioning buildings,” he said.

McKinney Elementary is heated by a coal furnace and air conditioned through window units in the classrooms, and Padgett said ceiling tiles throughout the building are riddled with asbestos, among other problems.

Mitchell was concerned his intentions may be misconstrued as self-serving because he is the director of business development for Branscum Construction, a local firm that sometimes bids on contracts with the school system.

He was also on the committee that presented a plan to consolidate and build new schools, but he said such a preliminary plan was required to put the tax itself to a vote — he said it doesn’t have to be the plan the county implements, but it’s better to lock down the tax now and decide how to spend it later.

According to the event’s Facebook page, organizers planned the rally “to show our support of the nickel tax in hopes that the Board of Education will revisit this opportunity that will bring $10.7 million … from the state.”

It was originally planned for late Thursday afternoon but was rescheduled so as not to interfere with Cow Bell Days festival programming.

Smith did not speak at the meeting, and she said later that she only went to get feedback and hear comments from the community.

“The great thing about living in America is free speech,” said Superintendent Michael Rowe, who had supported the nickel tax and recommended it to the board but was not at Tuesday’s rally. “I respect the thoughts and opinions of stakeholders on both sides of the issue. If the board does decide to revisit the issue, I hope we can find a solution that is best for the students of Lincoln County.”

Editor’s note: There seems to be misconception in the county about what bonds are, so we feel the need to note that money received from bonds is not free. Bonds essentially are loans, and the district would eventually owe back the money it receives to the purchaser of the bonds; in Lincoln County’s case, the purchaser of the bonds would be the Commonwealth of Kentucky. This does not change The Interior Journal’s editorial position on the board’s failure to vote on the proposed tax that would offer $21 million in bonding potential and is recallable by the public if it so chooses.