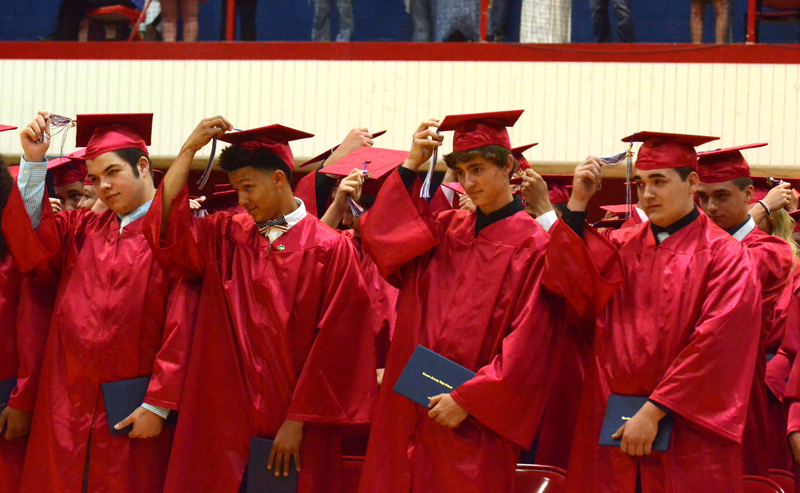 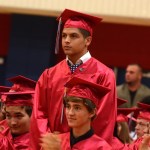 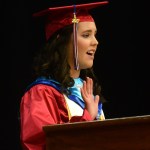 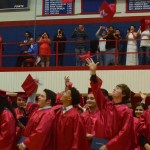 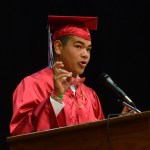 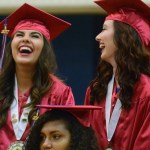 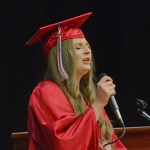 After four years of classes, homework and tests, the Class of 2017 bid a final farewell to Lincoln County High School, giving a toss of their caps at the end of Tuesday’s graduation ceremonies to commemorate their journey.

After the welcome by principal Michael Godbey, senior class president Carlos Nunez, valedictorian Auburn Mattingly and salutatorian Taylor Floyd spoke to their classmates about their time at Lincoln and their hopes for the future, bringing out some laughs and some tears from their fellow classmates as they relived funny memories, quirks and stories.

The most visible of the tears came at the opening of Floyd’s speech as she thanked her mom and dad for “pushing me to be the best version of myself even when I didn’t understand your intentions.”

“You are my best friends, and I love you endlessly,” she said through tears.

Floyd also thanked the educators and faculty members for their endless hard work and encouragement throughout her high school career.

When her tears had dried, she went on to reflect on the future.

“We have waited for this exact moment for 12 years,” Floyd said. “Today brings a season of change. It is time for us to decide to be more than who we are right now. We cannot stop here. Whatever we choose to do when we walk out of those doors for the last time, we must choose to do it well. Whatever we decide to be, farmers, doctors, moms or presidents, we must make the decision to be great and to be happy.”

When it came to the laughs, Nunez delivered.

“With all odds against us, we’ve made it…such as owing the library for overdue books or owing the cafeteria money for trying to take an extra orange juice, also having to fight truancy and senioritis. We have defeated everything that has been thrown at us.”

Getting the privilege of driving a car was a highlight for many  of the seniors their sophomore year, a privilege that Nunez admitted he did not earn easily.

“So it all starts with passing your permit test,” he said. “… which I failed once, maybe twice …okay, maybe three times but that was it. Next came the actual drivers test, where you had to back up how good your whip game actually was, and, to tell you the truth, I have no clue how some of you all passed this.”

As seniors, Nunez said they knew that “this was our school, our time and our year” but he also acknowledged that it finally hit home that it was time to think about what happens after high school.

“It hits you hard, almost as hard as Mrs. Story hitting the ground at senior field day, and that’s when the sense of not knowing begins once more,” Nunez said. “We will be taking our first steps into the real world and we will be freshmen again. We will be trying to find ourselves, starting at the bottom again. When we first walked through these doors, we started at the bottom. And now we’re here, but that’s okay because when you are at the bottom the only way to go is up.”

With her time as an LCHS student quickly ticking away, valedictorian Auburn Mattingly simply asked for “five more minutes.”

“411,045 minutes ago, on Aug. 11, 2016, we started our careers as seniors of Lincoln County High School. In roughly 60 minutes, that will all be over. We will be graduated and going our separate ways,” she said. “In the minutes to come, our paths will depart to college, trade school, the workforce, Army, Marines and others. This is the last time we will all be here together as seniors of Lincoln County High School. What would you give for five more minutes?”

“Truth is, this life goes way too fast and it won’t slow down. We do not have a pause button,” Mattingly said. “Those five minutes we spent counting down to 3:09 everyday are now gone forever. I cannot control the roller coaster 411,045 minutes of senior year, but I can choose to enjoy the moments along the way. I challenge you all to enjoy each and every five minutes no matter where this life takes you.”

“We don’t know the curveballs this life will throw at us. We don’t know how many more ‘five minutes’ we have left so make the most of it, because there will be times you will look back and say, ‘I wish I had five more minutes.’”

Following the speeches, Michael Godbey presented the class for the receiving of diplomas. Assistant principals Stacy Story and Billy Harris and counselors Jeannie Cooper and Tracy Griffin made the presentation of diplomas.