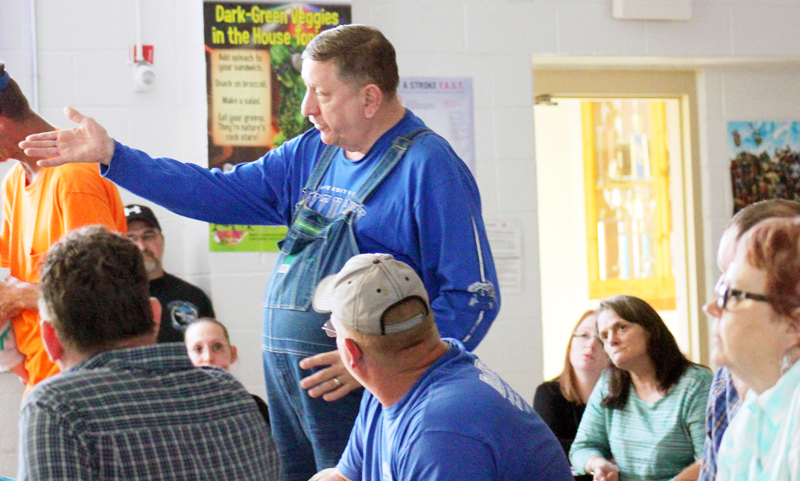 Photo by Abigail Whitehouse A large group gathers at McKinney Elementary as the public voices their questions and concerns about the district’s proposed recallable nickel tax. A town hall meeting has been held at six schools with two left on the schedule before the board votes in June. 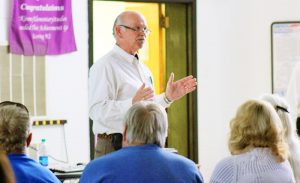 MCKINNEY – The crowd that gathered in the McKinney Elementary cafeteria Tuesday night was by far the largest so far to attend one of the school district’s town hall meetings regarding the recallable nickel tax.

Town hall meetings have been held at Crab Orchard, Highland and Hustonville Elementary Schools, as well as Lincoln County Middle School, Lincoln County High School and Tuesday night McKinney Elementary was added to the list. Lincoln Superintendent Michael Rowe has presented a “budget 101” powerpoint presentation at each meeting, detailing the district’s finances and what it needs to address facility issues across the county.

The cafeteria held about 60 to 70 people on May 9 – the average attendance at the other schools has been about two to five people, at best. Crab Orchard and Highland had fewer than five people from the public in attendance and the others did not produce more than a handful of attendees, according to Rowe.

The meetings have centered around the proposal of a recallable nickel tax that would boost the district’s bonding potential from $3.2 million to potentially $21.1 million, with the state matching $10.7 million.

Revenue generated by the nickel tax can only be used for construction or renovation of school facilities.

According to a District Facilities Plan, the Lincoln School District faces $72 million in unmet facilities needs. McKinney Elementary is 39,100 square feet and is one of several schools that will need a “major 30-year renovation,” according to the plan. Districts are required to develop a local facilities plan once every four years, according to the Kentucky Department of Education’s website.

Nearly 30 names were listed on a piece of paper as attendees signed up to speak following the superintendent’s presentation – the majority of which used their time to express their love for the school and denounce the idea of paying more taxes and consolidating with another elementary school.

“$30 million dollars is unimaginable for a poverty county,” Carrier said. “We’re a poverty county. I’m a landowner and I am absolutely, tee-totally, 100 percent against this. It’s going to devastate our community. We seen what happened to Broughtontown. We seen what happened to Kings Mountain. Put us up a tombstone if you take our school out of here.”

Carrier said he can’t support more taxes and adding to the debt already in place.

“It may not be the best, but it certainly ain’t the worst,” he said. “We can’t afford this. No more taxes. If we go into this, there are going to be people in this county that have to make a hard decision: ‘do I buy food or do I buy medicine?’”

“This building is still holding up pretty steady, you know” Young said. “It’s not crumbling to the ground like some people think it is, you know. It still has a lot of use in it. My kids have been here for many years and I think it’ll work and hold up…”

The loss of some teachers or faculty members through attrition, if consolidation were to occur, was another concern voiced by the public Tuesday night.

“I do worry about our teachers,” said Natasha Goode. “I know you say they’re going to get to keep their jobs and all that, but my teachers know my kids. Have we had any bids on how to fix up the school as opposed to putting up a constellation we don’t need?… Y’all (have) got rich man’s taste and poor man’s money.”

During the presentation, Rowe explained how some positions would be lost through attrition but it would take about seven years for that to run it’s course.

Autumn Lynn said it’s an “atrocity to indoctrinate children into a system where their individuality isn’t celebrated” which McKinney Elementary School does, she said.

“As a parent who has five children in four of the schools in this county, I can tell you right now, you want to talk about home-schooling? I’ll jerk a lot of money out with my kids because I will homeschool mine if you close this building. And I’m not alone – there are a lot of parents who are furious with you right now,” Lynn said, restating the district still faces $30 million in debt. “Get some estimates, find out what it’s going to cost to repair this place. You might be from the county, but you’re not from here. This building is where our children go and this is the building we want our children to stay in.”

For some parents and adults in the audience, the building itself holds sentimental value.

“I would just like to say I’m 65-years-old and this was the place where I started school. This is part of me,” said Tina McDonald.

Rick Naylor, a local pastor, said he never thought the day would come when he would leave McKinney’s school building.

“Now here I am, looking at fond memories as a little boy sitting in this cafeteria,” he said. “We lost something when we went to Lincoln County High School. My dad knew my teacher and my teachers knew my dad. Today, with all of the money-saving consolidation, we can’t afford a music teacher? Something went vastly wrong since 1974.”

Naylor said technology isn’t everything and being big is not always the answer.

Concerns about longer bus rides, larger classroom sizes and fewer one-on-one interactions for students and teachers were some of the other issues voiced by community members as well as Magistrate Joe Stanley, who said opportunities for kids would be lost through consolidation.

One woman asked how the decision for consolidation is made and who is present to hear and record the public’s concerns.

Rowe said the board members make the ultimate decision and pointed to Board Secretary Colleen Benson who has attended and recorded each of the town hall meetings – meetings that the district is not required to hold – as well as a reporter from The Interior Journal who was also present. Rowe said Benson passes along all

“If no one is here to hear our input, I mean, is this basically something that is already happening? If all of us actually disagree first and foremost, who do we need to contact?…” the woman asked. Rowe said the public is welcome to contact board members or himself.

“Nobody has committed a vote one way or the other at this point,” Rowe said. “They’re willing to listen and talk, that’s why part of this is going on for us to be able to provide input for that.”

Board member Alan Hubble has attended most of the town hall meetings so far as well, Rowe said, and together they will pass along information and concerns from the public to the other board members.

A public forum will be held prior to a vote on the nickel tax, he added, and the date and time of that will be advertised in the local newspaper. Rowe clarified that the passage of a nickel tax is not a vote to consolidate schools but that was the initial plan approved by the local facilities committee.

Judge-Executive Jim Adams, however, voiced support for the school district’s initiative, as well as the McKinney community for showing up to the meeting.

“I appreciate the new superintendent’s efforts,” Adams said. “He walks in here his first year, he’s not from here… and he’s taken the bull by the horns. He knows the direction we’re heading financially. There’s two things I worry me about with my grandkids and one is health and the other is education. Apathy is the worst thing that can happen to a school and you guys have proven tonight that there’s not apathy.”

A farmer who moved to McKinney from Marion County said he supports the tax 100 percent and asked the public not to fight it.

“I’ve seen it in other counties. Please don’t fight this tax. It’s the best thing we can do for our schools. Everyone pretty much agrees we ought to fix these schools,” said Ethan Jones. “I commend you for doing the job you’re doing because you are making everybody look at the facts. The fact is, we are out of money.”

Jones said if the community wants to keep all the schools open, they are going to have to pay more taxes, otherwise consolidation will be the only choice.

“Like I said, I’m not from here. But we moved up the road and when we got here, we said ‘daggone, there’s a school right down the road, a mile up the road from our farm.’ It’s great. I can’t imagine (children) not coming here,” Jones said. “That’s the way I feel and I’m not from here. But I’m from here now. Pass the tax. Get out of debt. Fix these schools. That’s what we need to do.” 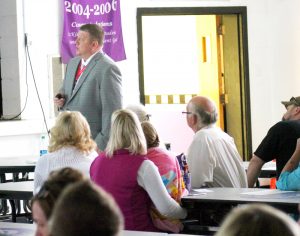