Stanford Police: dog shot in back with firearm 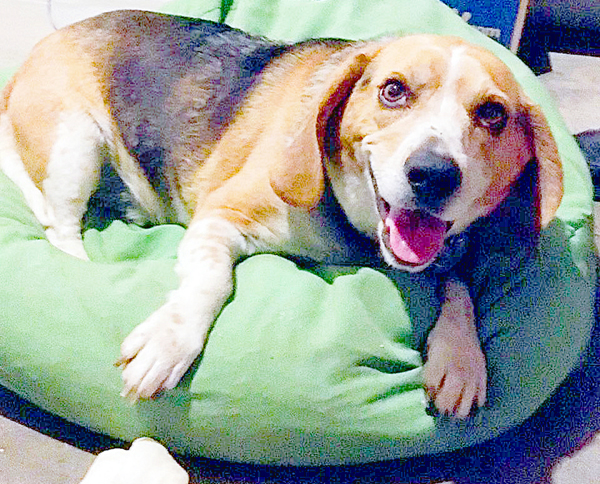 Photo courtesy of Stanford Police Department A six-year-old beagle named Rusty was shot in the back with a .22 caliber firearm by an unknown suspect, police said.

STANFORD – After three days of less-than-normal behavior, a local pet owner took his dog to the veterinarian, only to find that the canine had been shot in the back with a firearm.

A report from local veterinarian Devon Carlton provided to Stanford Police Officer Preston Middleton, states that once the hair around the suspected area was shaved and metal shrapnel flushed away, an entrance and exit wound could be found on the six-year-old Beagle.

Known to his owner, Clarence DeWit, as “Rusty,” the beagle appeared to have been shot with a .22 caliber firearm, according to Carlton, and rat or snake shot ammunition was possibly used.

Following the visit to the veterinarian, DeWitt called police to report the incident.

Middleton said upon his arrival, the canine was at home resting after visiting the vet and through discussion with DeWitt, the officer determined that an unknown suspect fired a single shot into the back of the beagle.  No motive has surfaced, according to the officer’s report.

“The DeWitt’s dog is on a cable tie in the middle of the backyard property, away from neighbors’ property on Portman Avenue and away from the property line to Maxwell Street concealed by trees and greenery,” the report states.

According to Middleton, the only other crime committed in the area was a burglary at a residence on Maxwell Street, that actually lines up with the backyard of the property and reportedly occurred during the same time frame as the incident involving Rusty.

The investigation is ongoing and as of Tuesday this week, police have only received one tip – it was of no help to the case.

Middleton, who is also Stanford Police Department’s K9 handler, took to his  Facebook page to seek out information from the public.

“He has a loving family who is nursing him back to health, but we need your help to find his assailant,” Middleton wrote. “Contact me at the Stanford Police Department with any leads.”

Middleton said he was told that Rusty was recovering well from the incident as of this week.

Grimes, Cain to exchange wedding vows on May 20