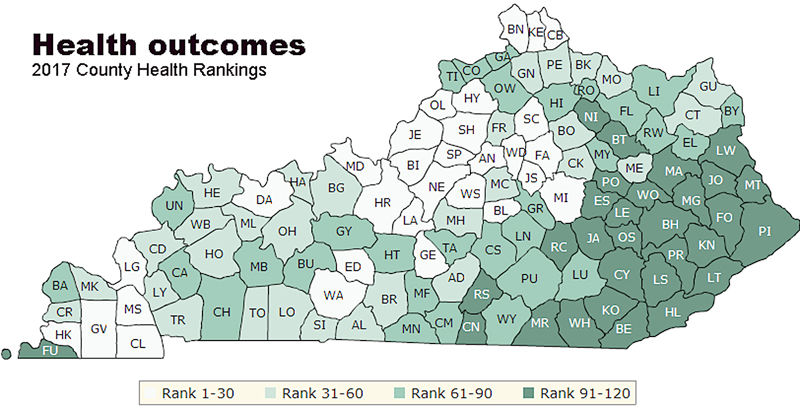 An annual health report has ranked Lincoln County 79 out of the state’s 120 counties in overall health outcomes, according to data released last week.

The report, released annually by the University of Wisconsin Population Health Institute and Robert Wood Johnson Foundation since 2011, measures several aspects of living that can affect the health of a community.

While Lincoln County’s overall health ranking worsened from 71 in 2016 to 79 this year, other health rankings included in the data saw improvement. The county ranks 77 in health factors this year compared to last year’s rank of 88.

Experts say the premature death rate is fueled by drug overdoses, which accounted for nearly 1,250 deaths in 2015, according to the Overdose Fatality Report by the Kentucky Office of Drug Control Policy,” Danielle Ray of Kentucky Health News reported.
According to the same overdose fatality report, 16 overdose deaths were reported in Lincoln County between 2012-2015. Those deaths “represent overdoses by illicit and/or prescription drugs that were inflicted intentionally or unintentionally,” the report states.
Surrounding counties had similar statistics with Garrard County reporting 15 overdose deaths in that time period; Casey, 11; Boyle, 20; and Rockcastle, 19. There were 50 overdose deaths in Pulaski County during that time, according to the report.

The number of alcohol-impaired driving deaths in Lincoln is improving, according to the annual health data, while sexually transmitted infections are getting worse.

Socioeconomic factors are also calculated into the county’s overall health ranking and this year’s data shows improvement as Lincoln was ranked 79 in comparison to last year’s ranking of 91. The high school graduation rate improved by 5% from last year to 95% this year. Unemployment also improved from 8.7% to 6.9% and the percentage of children in poverty improved from 35% to 31%. in the recent data.

President and CEO of the Foundation for a Healthy Kentucky Ben Chandler commented on the recent findings in a new release and said the rankings “show that people living in Eastern and rural Kentucky counties tend to have much poorer health than those in urban Kentucky counties.”

Compared to the five surrounding counties, Lincoln lands near the middle of the pack when it comes to health rankings this year.

SO YOU KNOW
For more information and to find an interactive map of your county’s ranking visit http://www.countyhealthrankings.org/app/kentucky/2017/rankings/outcomes/overall.