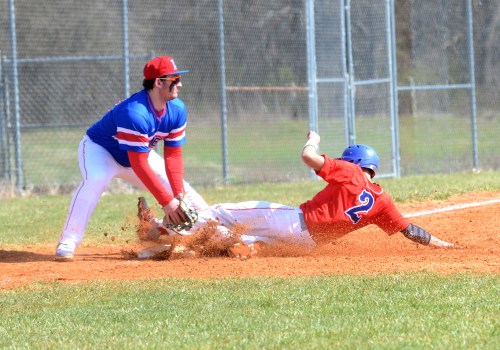 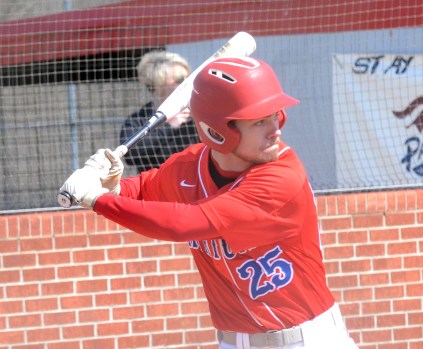 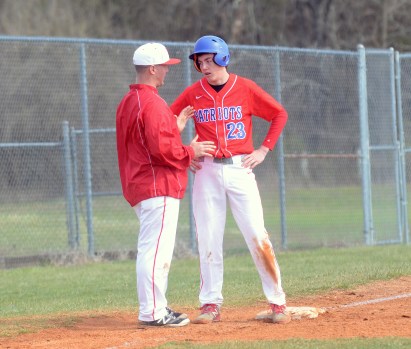 Photo by Nancy Leedy SPEEDUP runner Zack Hazlett listens closely to Lincoln coach Tee Ellis at third base in the sixth inning of the Bat Patriots’ 10-0 win over Model. Right after this photo was taken, Hazlett scored the game-ending run off a Cooper Brown single. 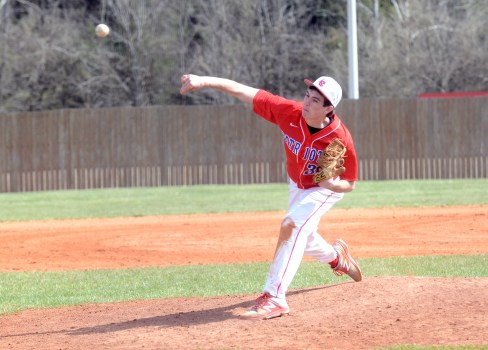 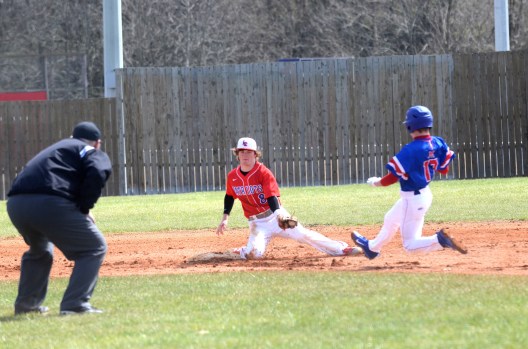 STANFORD — The Lincoln County High School Bat Patriot baseball team started the season with a bang, rewarding new coach Tee Ellis with a resounding 10-0 romp over visiting Richmond Model in six innings Saturday afternoon.
Lincoln (1-0) scored one run in both the second and third innings and never looked back. The Bat Patriots really poured it on in the fourth and fifth innings to distance themselves from the visiting Patriots, tallying four runs in the fourth and three in the fifth. Cooper Brown put the icing on the cake in the bottom of the sixth inning when he singled to centerfield to drive in the final run to trigger the 10-run game-ending mercy rule.
“That was nice,” Tee Ellis said of his first win as Lincoln County’s head coach. “I tried to get the boys to stay focused and keep adding on runs. In the past and in our scrimmages this year, we kind of got lackadaisical in the middle innings and then we were sitting behind at the end of the game. Today, they stayed focused. They played steady, kept our game plan, stayed aggressive at the plate, jumped on early counts, early pitches in the count and did well.”
Senior right-hander Noah Horton pitched a gem in the win. He allowed just one walk while striking out 14 Model batters in six innings.
“My limit for Noah was 80 pitches. He got in 79 and he was coming out that next inning if we didn’t score that run there,” Ellis said. “He did well. He was locating, locating his fast ball well and his off-speed and it showed with one walk with 14 strikeouts.”
Although right at his limit, Horton wanted to pitch the seventh if needed. Coach said, ’No.’
“He didn’t want to be replaced,” Ellis said. “He said, ‘Coach, c’mon man, let me finish it.’ He wanted to stay in the seventh if we played. But it’s early and we don’t want arm trouble throughout the year so we weren’t going to leave him in any longer if the game had gone on.”
The Bat Pats broke on the scoreboard in the bottom of the second inning, with Josh Caudill tagging the first of his three hits in the game to drive in Jared Long, who walked on. Speedup Zack Hazlett tacked on Lincoln’s second run. In the third, Parker Monhollen singled to left field with two outs to reach and Hazlett replaced him on base. Hazlett stole second then came on home on a bloop single by Horton to make it 2-0.
Lincoln did it’s best work in the game with two outs, though, scoring a total of seven runs with two away over the fourth and fifth innings.
Brown reached on a fielding error with one out in the fourth then stole his way to third. After a pop fly, Brown scored, coming in on a Caudill single. Caudill stole second then took advantage of a throwing error off a Garrett Clem shot to score. Clem later scored on a Luke Smith double to right field and Hunter Jeffries singled to center to plate Smith and make it a 6-0 ballgame.
Brown and Caudill would touch all the bases in the fifth inning as well and Devin Lawhorn would also add a run. Brown tagged a two-out double to reach then scored on a dropped ball by Model. Lawhorn reached on the dropped ball and both he and Caudill, who singled on, scored when Clem doubled to left field to extend the lead to 9-0.
Smith reached on a walk in the fifth to put two runners up before Nathan Lemieux, Model’s third pitcher of the game, stepped in to pitch a strikeout and end the inning.
Ellis said he liked the way the Bat Patriots ran the bases and how they took advantage of Model errors.
“That’s something we’re going to do. We’re going to run,” he said. “I told them in the huddle that we’re going to run a lot. If we see we can take advantage of that and move up a base and get closer to scoring we’re going to do it.”
Monhollen, who finished with two hits, led off the bottom of the sixth with a shot to left center. Hazlett replaced the senior catcher on base then proceeded to steal his way to third base on wild pitches before Brown connected to send him home and end the game.
Luke Keck got the start for Model (1-1), Jakob Tharp came on in the fourth and Lemieux replaced him in the fifth. The three hurlers gave up 10 runs off 12 hits and two walks, with four strikeouts.
Jeffries, Monhollen, Clem and Brown each had two hits for Lincoln. Clem, Brown and Smith all had a double.
“It was a good way to start the season,” Ellis said. “It was nice to get this first win and I hope we keep it going.”
******
at Lincoln Co.
1  2  3  4   5  6       R    H    E
Model   0   0  0   0    0    0   –    0     0     4
LC 0    1  1   4   3   1     –  10  13 0