Ambulance board delays vote on 2017-18 budget 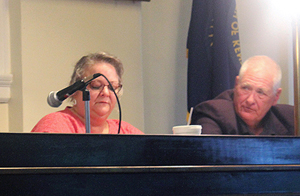 Board awaits opinion from Attorney General on tax rate increase

STANFORD – After requesting an opinion from the Kentucky Attorney General on the legality of the ambulance board’s tax rate increase, the board has decided to postpone voting on a final budget to next month.

Last August, the Lincoln County Ambulance Board voted to increase real and personal property tax rates from 4.8 cents per $100 of assessed value to 9.8 cents per $100. The new tax rates are estimated to generate a total of $899,653 in revenue.

Since the vote, concerns over the legality of the vote were raised by a Lincoln County resident, which the board agreed to address.

In February, the board hired Assistant Commonwealth’s Attorney Neal Tucker as legal counsel and instructed him to send a letter to the attorney general requesting an opinion on the legality of the August tax vote.

Tucker updated board members during the regular March 20 meeting and said the request for an opinion has been sent and received by the attorney general’s office.

“I spoke with Matt James (with the attorney general’s office) last week, he had just been assigned to the request for the opinion so he read my letter but other than that I couldn’t really get any information from him,” Tucker said Monday night. “He did understand that the board is holding the funds and we’ve requested for the matter to be expedited.”

Tucker said he couldn’t give an exact date to expect an opinion but he is hoping to have an answer by the April board meeting.
During a March 13 special-called meeting, board members began discussion of the 2017-18 budget and how to move forward while awaiting the opinion from the attorney general. Vice Chairman Bob Floro said Monday night that the rough draft of the 2017-18 budget has been based on the current tax rate of 9.8 cents per $100 of assessed value.

“It was decided that, if in fact, we received an adverse decision from the attorney general and actually were required to pay back the tax revenues that we have collected against the new rate, then we would obviously pay those back and then amend the budget downwards to either the old prevailing rate or the rate of four perecnt or above,” Floro said. “We will defer our vote on this budget until next month in hopes that we’ll receive a decision before then.”