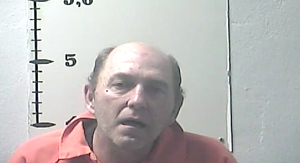 STANFORD – A wrecked car, some empty 9mm shell casings and a man held inside a home against his will – that’s the scene that developed on Short Acres Road last Friday night, according to Lincoln County law enforcement.

It was just before midnight on Jan. 13 when deputies received a complaint about an apparently intoxicated man walking up and down the road, yelling profanities, threatening neighbors and shooting a firearm in an unknown direction.

When Lincoln County Sheriff’s Deputy Chase Marcum and Sgt. Ryan Kirkpatrick arrived at the location, Marcum said they found a black cadillac that appeared to have been wrecked – and likely totaled.

“I talked to the 911 caller, went down there to help Kirkpatrick and while we’re down there, we heard a couple gun shots and it sounded like it was right beside us,” Marcum said.

The close proximity of the shots coupled with the apparent violent behavior of the man immediately put law enforcement on edge, he said. Marcum and Kirkpatrick both put their Lincoln County Emergency Services Unit gear on at that point.

Kentucky State Police and the Boyle County Sheriff’s Office also responded to the scene which was just outside of Junction City, Marcum said.

Deputies were able to identify the man as 50-year-old Charles Annes, of 434 Short Acres Road.

“I teamed up with one Boyle County Deputy and Kirkpatrick teamed up with another,” Marcum said. “We were able to contact Annes and located him three houses down from where we were.”

Annes was irate at first but calmed down as deputies talked to him over the phone, the deputy said.

“So we surround the house and call him out and he finally comes out and while we’re talking to him, there’s another guy in the house,” he said. “The other guy was on the phone with Boyle County dispatchers telling them he was inside and wanted to go outside.”

Annes refused to let deputies inside the house to let the other man out and refused to do so himself, Marcum said.

“Annes opened the door and yelled back into the house and told the man to keep sitting there and not to move,” he said.

After speaking with Annes, deputies said he allegedly admitted to being intoxicated and firing a handgun in the direction of the home belonging to the 911 caller, who had two grandchildren in the residence, according to the arrest citation.

When deputies attempted to put Annes in handcuffs, he actively resisted, Marcum said.

“After he was in handcuffs, we interviewed the man in the house and he said Annes had been driving the car when it was wrecked,” he said.

Emergency medical responders examined Annes on scene but he refused to go to the hospital, Marcum said.

“We did locate some empty 9mm shell casings and we also found a Luger 9mm semiautomatic pistol that had two fully-loaded, 30-round magazines and one 15-round that wasn’t fully loaded,” he said.

Annes was charged with operating a motor vehicle under the influence of alcohol; first-degree unlawful imprisonment; resisting arrest; and second-degree disorderly conduct. He was lodged in the Lincoln County Regional Jail but has since been released, according to jail records.

Keeping the Faith: Family fights for medical device for…