Keeping the Faith: Family fights for medical device for daughter diagnosed with Pachygyria 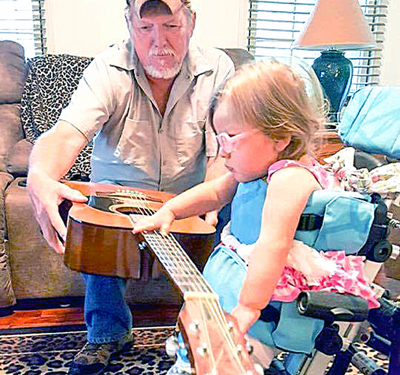 Photo contributed Emery VonGruenigen plays guitar with her grandfather while strapped into the “stander.” 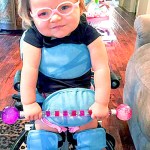 Emery VonGruenigen rests in a “stander” device aimed at helping her bear weight on her legs, something she struggles with due to her diagnosis of Pachygria.

STANFORD – Emery VonGruenigen was a seemingly healthy baby girl when she was born in 2015, but after a few months, her health took a turn. Now, her parents are doing what they can to help her develop abilities that healthy children have – like standing on her own two legs.

At about five months old, Emery’s parents noticed that she wasn’t rolling over and she was staring off for long periods of time, her mother Deedra VonGruenigen said.

“We started to notice they were getting longer. At first I just thought it was five seconds of staring, i didn’t know it was a seizure,” she said.

Those seizures increased in frequency – up to as many as 21 seizures in one day – and Emery was taken to the University of Kentucky’s Emergency Department.

Emery was diagnosed with Pachygyria a short time later.

“She has smooth spots on her brain,” VonGruenigen said. “Parts of her brain are working and parts are not and they explained to us that the earlier the intervention (the better), the plasticity of the brain can take over other parts that aren’t working.”

The diagnosis brings with it a load of responsibilities for Emery’s mother and father, Cody, as well as constant medical visits and therapy sessions.

Emery is about 16 months old now and the seizures are under control, thanks to two different medications, her mother said.

If she can make it to Jan. 26, Emery will have been seizure-free for an entire year, she added.

It was around her first birthday in July of 2016 that concern for Emery’s ability to bear weight on her legs began, VonGruenigen said.

“They sent us Shriner’s Hospital to have her hips checked out because her legs are a little floppy. She could pretty much do the splits,” she said.

That’s when her doctors suggested Emery start using medical device called a “stander” to help her through development and strengthen her ability to stand on her own.

“It’s this thing you strap her in and pump it up to where she is straight up and down and all of her weight is beared onto her legs,” she said.

While the therapists have given Emery a stander on loan to use, VonGruenigen said it has been a constant battle trying to get her insurance to cover the cost of a personal stander for Emery.

“This whole process started in July and here we are in December (now January) and we still don’t have the stander,” she said. “We have the used loaner and we’re very thankful for it but it’s not sized for Emery, the tray doesn’t work. We make do because she needs it.”

VonGruenigen said it’s frustrating because the family pays out so much money to keep insurance and they can’t seem to get a vital component of Emery’s development covered by that insurance.

“They should pay for it,” she said. “Her physical therapist is the one who initially filled out the paperwork to submit to insurance for the stander. She has 20-something years of experience and has never had one of these denied. She was very surprised.”

It seems unfair, she said.

“We were denied and we did an urgent reconsideration to where they have to let us know within 72 hours,” VonGruienigen said.

“It was frustrating because I was getting phone calls from different people and one told me they received our reconsideration and one said they didn’t. I faxed it three or four times.”

It took the insurance company longer than 72 hours to respond to the appeal, too, in which they denied to appeal for the device due to it being “experimental or investigative.”

“I’m just really worried for the future with Emery’s diagnosis,” her mother said. “She’s delayed and I’m almost positive she’s going to have to have other devices, one being a gait-trainer, which is a walker device. I’m just thinking, ‘are we going to have to go through this every single time? What if there comes a point where the therapy centers don’t have one for us to use?”

Any amount of time without the aid could affect Emery’s progress and development, she said.

Emery travels to Somerset for therapy an also does at-home sessions, a total of five therapies a week to help her through the condition.

VonGruenigen said her mother, Emery’s grandmother, has been a huge help in caring for Emery and working with her during the day while Deedra and Cody are at work.

“She has a big support system and we all fight for her,” VonGruenigen said. “Most kids can stand at her age and she’s just not able to move around like them.”

But the stander device has helped quite a bit with that and more.

“We’ve noticed the stander is helping her digestive system and her breathing,” she said.

VonGruenigen said while she knows the family could just purchase a stander on their own, it’s more about principle.

“That’s not the point. We spend so much money through the insurance, I just feel like they need to be the ones supplying these types of things. It’s not like we’re asking for the hottest toy of the season, this is a device that is going to help her development and help her to be succesful in the future.

For now, VonGruenigen said she’s not giving up the fight and will continue to try and get the device covered so Emergy can continue to progress.

Most recently, Emery and her parents made a trip to Louisville where they met with numerous medical specialists to gather more information and support for the approval of the stander device.