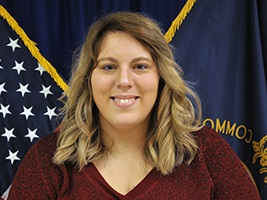 FRANKFORT – The office of Auditor Mike Harmon announced the hiring of Leigh Compton in the Auditor of Public Accounts.  Compton started her job as a county auditor in APA’s Central Kentucky region on December 16.
Compton, who lives in Stanford, is a 2006 graduate of Boyle County High School and is a graduate of Eastern Kentucky University.