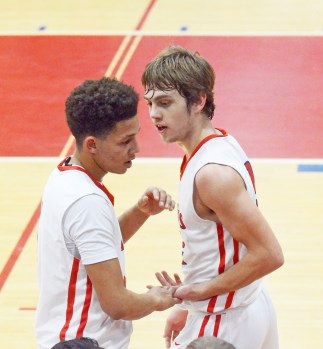 NOAH YOUNG, right, congratulates teammate Devin Alcorn after an earlier Lincoln win. Young led the Patriots with 25 points in Friday’s 76-69 win at Bryan Station. Alcorn finished right behind him with 24 points, including scoring 15 points on 5-for-5 3-point shooting. Photo by Nancy Leedy

LEXINGTON — Noah Young, Devin Alcorn and Chase Phillips combined for 62 points to lead Lincoln County to a 76-69 road win over Bryan Station.
Young led Lincoln with 25 points, Alcorn poured in 24 points, picking up 15 points on 5-for-5 shooting from 3-point range, and Phillips rounded out the trio of double-digit scorers with 13 points.
Lincoln (5-2) had to overcome an early deficit to earn the win, falling behind 16-8 in the first quarter. The Patriots, who shot 57 percent from the field, going 25-for-44, 9-for-12 from 3, missed four of their first eight shot attempts in the game to fall behind.
The deficit was 18-13 at the end of the first quarter, but Lincoln would erase Bryan Station’s lead in the second period, using a 24-10 run to surge ahead 37-28 at the half.
The 24-10 scoring spurt was bookended by 3-pointers with Young, who put up five points in the run, igniting the run with a trey then Alcorn, who put up eight points, closing with a triple to make it a nine-point game. Phillips scored seven of his 13 points in the run and Carlos Nunez and Nick Noland had a bucket apiece.
Alcorn’s 3-pointer was good for the game’s largest lead, 37-25, but Braeden Warren converted on a free throw late in the second quarter and Eric Boone, who finished with 15 points for the Defenders, hit a layup with one second left in the half to make it 37-28.
Station, which shot 49 percent from the field overall on 26-for-53 shooting, had its best offensive effort in the third quarter, going 7-for-13 (54 percent) and outscoring Lincoln 20-7. David Demarcus, who finished with 12 points, had nine points in the run, Nathan Mack added six points, Eric Boone had three points and Deangelo Boone had two as the Defenders moved ahead 48-44.
Lincoln was just 3-for-10 in the third. Alcorn drained a 3-pointer and Noland and Young had a field goal apiece.
Lincoln was back in control in the final frame, however, outscoring Station 32-21 to secure the win. Young scored 17 of his 25 points in the fourth quarter, including going 13-for-17 at the foul line. Alcorn had seven points in the run and Phillips had six.
Tanner McAninch, who finished with eight points, had a game-high 11 rebounds in a 29-20 Lincoln win on the glass. He and Alcorn each had three assists .
Terrance Murphy, who led Station with 22 points, scored 11 points in both the first and fourth quarters.