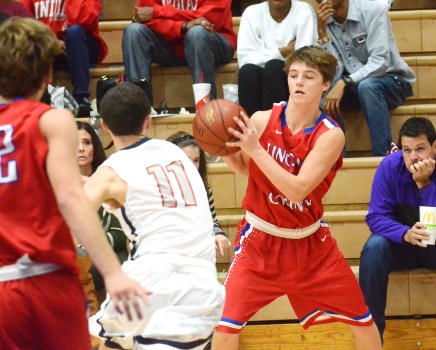 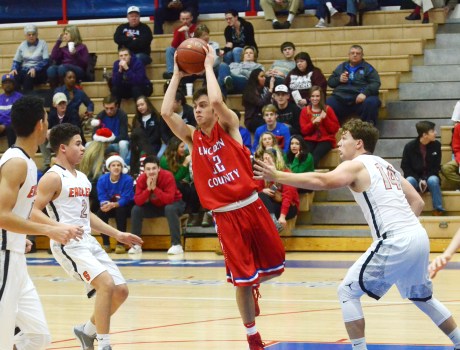 NOAH YOUNG readies for a pass to a Lincoln County teammate in the Central Bank Classic at Madison Central Saturday. Young poured in 27 fourth-quarter points and 37 total points in the 67-63 loss to Madison Southern. Photo by Nancy Leedy

RICHMOND — Noah Young scorched the nets for 37 points and Lincoln County outscored its opponent from the field in the Central Bank Classic at Madison Central Saturday night, but the Patriots couldn’t pull out a “W.”
Madison Southern made up for a six-point deficit from the field with a 14-for-29 stint at the foul line, converting on 11-of-20 trips to the line down the stretch to hold off Young and the Patriots for the Eagles’ first win of the season, 67-63.
Southern (1-3) led 18-16 after the first quarter then took advantage of a Lincoln (3-2) scoring slump in the second quarter to open the game up.
Young, who was 14-for-20 from the field, scored the only Patriot field goal of the second quarter at the 6:24 mark. Lincoln, which was 25-for-50 overall, took only eight shot attempts in the second.
Meanwhile, Michael Jefferson, who led Southern with 23 points and seven boards, knocked down a 3-pointer and a field goal, Tre McCreath also had a 3 and Bryar Rose, who finished with 15 points, and Noah Marshall each added a bucket in a 12-2 surge to put the Eagles up 30-18 at the half.
Southern outscored Lincoln 12-9 in the third to post a 42-27 lead and led by as many as 20 points in the fourth quarter, with Rose ringing up a 3 and Caleb Miller hitting inside for the 47-27 margin.
And Southern needed every point to hold off Lincoln as Young rallied the Patriots in the final frame by scoring 27 of his 37 points. But time ran out for Lincoln as Southern claimed the 67-63 win.
Southern shot 48 percent from the field, going 23-for-48 with seven 3s. Lincoln had nine 3s. At the line, the Patriots were just 4-for-7.
Devin Alcorn had 13 points for Lincoln. Tanner McAninch led the Patriots in a 34-24 loss on the boards, grabbing six rebounds.
Lincoln had 13 turnovers and seven assists.