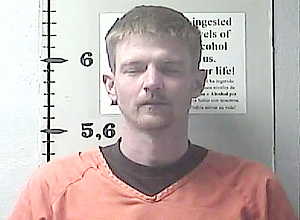 STANFORD – A police officer in search of a reported bale of hay in the road found an entirely different situation when he noticed a car stopped at a traffic light for longer than usual.

Stanford Police Officer Johnny Williams was dispatched to the intersection of U.S. 27 and U.S. 150 on Dec. 7 to locate a reported round bale of hay in the road.

After canvassing the area for several minutes with no hay bale in sight, Williams said he noticed a car that had been stopped at the stop light for about four light cycles and hadn’t moved.

Williams pulled onto the median beside the vehicle where a man was allegedly nodding off behind the wheel. The man, identified as 32-year-old Travis Vanpelt, of Stanford, acknowledged Williams and told him he had “had a long day” and was fighting a migraine.

A field sobriety test indicated Vanpelt was under the influence and when he pulled his cellphone out of his pocket, Williams said three packets were located underneath the phone.

“He was very incoherent,” Williams said.

Vanpelt submitted a blood sample which confirmed he was under the influence of heroin, Williams said.

Williams said Vanpelt was arraigned Monday in Lincoln District Court where he pleaded guilty and was released on the condition of a two-year probation.

The case was handled quickly, Williams said, thanks to the new Rocket Docket initiative that Lincoln and many other counties across the state are now implementing.

The program aims to expedite lower-level offenders and drug-related cases through the court system in an effort to get those people to the treatment and services they need sooner than later.

The program is also expected to save the county in jail costs by decreasing the average number of days spent waiting for a final ruling on a case.